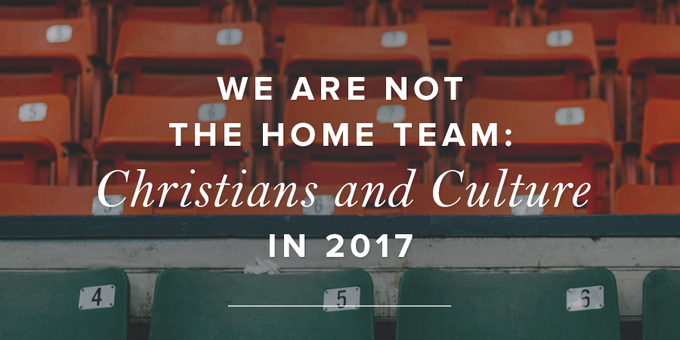 We Are Not the Home Team: Christians and Culture in 2017

It was winter. It was Saturday. And instead of enjoying our fiercely protected weekly coffee time, my husband and I loaded the family into the minivan and travailed the icy interstate, where we arrived at the location hosting our school’s attempt to defend its State Championship basketball title.

Seeded number one and having won every tournament game to that point, we received this important designation: the home team. One might expect that would include all the rights and privileges pertaining thereto, but as the gym filled with students, parents, and fans from every team in the league, one thing became apparent: We were the “home team,” but we were definitely not at home.

First of all, although we were technically the home team, we were playing in the gym of our opponents, the number-two-seeded school, which was hosting the tournament. The gym was flying the “Warrior” flag, so to speak, filled with their pep rally graffiti, their banners boasting of previous accomplishments, and their fans, who felt quite comfy in their “usual seats.” Our team had won the state title the previous year in a very close and contentious match, and that, along with the perception that as one of the smaller schools in the league we were perhaps playing above our station, we just got the feeling that all of the others schools represented were hoping we’d get taken down.

So you see the point I’m trying to convey, don’t you? We were the home team, but we sure didn’t feel “at home.”

Whose Team Are You Really On?

Tomorrow in the United States, we will inaugurate a new President. When this happens, it will leave a millions-strong voting block feeling like the home team. It will also leave millions feeling, suddenly, like the away team—sometimes jeered, sometimes politely applauded, but never with the perceived “mandate” inherited by the new home team. Also there is another group in the game: the team-less, the homeless, the alien, the disenchanted, some of whom now despise the game so much they don’t even want to hear the score. Among them are those who are afraid they’ll get ejected from the arena . . . but that’s a subject for another day.

For each of these groups, though, there’s good news . . . Well, there’s news, anyway: As Christians, we are not the home team, and until Christ’s return, we never will be.

Earlier this fall on a Revive Our Hearts program, Nancy illustrated this point using a passage written by Dave Butts of Harvest Prayer Ministries:

For many years now, the church has been the home team in America. We’ve had the advantages that a home team enjoys. We were the culturally dominant force that had to be dealt with by everyone else. When national leaders talked about faith, everyone knew they were referring to the Christian faith. The home team advantage was enjoyed—and simply taken for granted—by the church. The church is no longer the home team in America. If we can understand that, we will pray differently—and more effectively—for our nation. So much of the conflict comes when we still act as though we’re the home team.

He went on to say:

An away team isn’t trying to be loved and honored. They want to do their best to bring about victory! All too often, we forget that as we pray for the United States. Our prayers are often more about returning the church to a place of privilege than about seeing the gospel preached with transforming power.

Over and over as I’ve considered the events of 2016 and look toward what the new year may bring, from policy to politics, from natural disaster to racial tension, I can’t help but think about how loudly our nation and our world are groaning (Rom. 8:22). The louder the groaning, dear sisters, the less likely it is that we will find ourselves on the home team, politically or otherwise. For even if you experience triumph in politics or policy, such things are fleeting at best. So here’s my advice:

If you feel like you’re on the home team now, don’t get too comfortable.

If you feel like you’re on the away team, don’t despair. You’re in good company!

Living Like the Away Team on the Home Court

Scripture offers plenty of examples of God’s people who mastered the art of living in “away team mode” even while technically at home:

Preserve me, O God, for in you I take refuge. I say to the LORD, “You are my Lord; I have no good apart from you” . . . The LORD is my chosen portion and my cup; you hold my lot. The lines have fallen for me in pleasant places; indeed, I have a beautiful inheritance. . . . You make known to me the path of life; in your presence there is fullness of joy; at your right hand are pleasures forevermore (Ps. 16:1–2, 5–6, 11).

If anyone else thinks he has reason for confidence in the flesh, I have more: circumcised on the eighth day, of the people of Israel, of the tribe of Benjamin, a Hebrew of Hebrews; as to the law, a Pharisee; as to zeal, a persecutor of the church; as to righteousness under the law, blameless. But whatever gain I had, I counted as loss for the sake of Christ. Indeed, I count everything as loss because of the surpassing worth of knowing Christ Jesus my Lord (Phil. 3:4–8).

Friends, we might not be David or Paul, but there are some things we can do to live well as the away team:

As Nancy said in the radio program I referenced earlier:

So what do we do between now and then, between here and there? Remember the Lord’s song—the song of the redeemed! It may seem difficult, even impossible at times, to sing it in a foreign land, but purpose to sing it—even through your tears! Sing it by faith, and sing it in joyful anticipation of that day when we will sing it forever and ever and ever. Amen.

Sisters, if we were ever truly on the home team, we are not anymore. But we can live a life bringing honor to the Lord even as foreigners in our homeland. We are citizens of a greater kingdom. We may be the away team now, but our ultimate, eternal victory is secure.

How will you live well on the away team today as you engage your culture and your community? How can you teach your children to live as citizens of heaven while residing on earth?