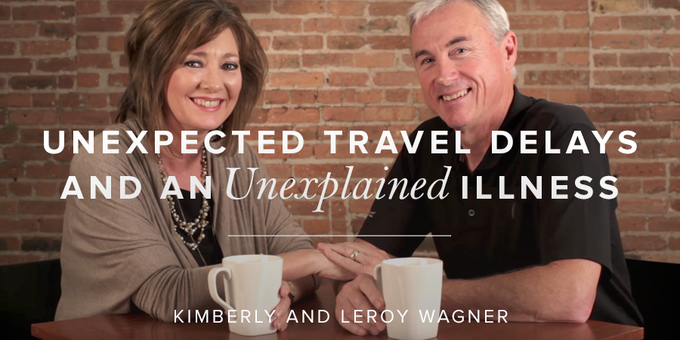 Twice now Kimberly Wagner and I have ended up in exotic locations to speak at an event together: first in Brazil in 2015, and a month ago at the Gospel Coalition Conference in Prince Edward Island, Canada.

This past speaking engagement in Canada has been on our calendars since 2015. Our host kindly offered to let us stay a couple extra days with our spouses to be refreshed. It didn’t take more than a few seconds for Trevor and I to agree, “Prince Edward Island? Um . . . yeah!” Kimberly and her husband, LeRoy, also planned to take our host up on his kind offer.

That was before I was pregnant and gave birth to our son. And before we learned that Trevor wouldn’t be able to come, as it fell during his busiest season at work.

It was also just before LeRoy began experiencing strange symptoms. These undiagnosed symptoms persisted for the next two years—right up until the conference. In spite of his declining health, LeRoy insisted that they keep their commitment. He and Kimberly set out from Arkansas the day after my mom, my son, Iren, and I left New York.

An Exhausting Day of Delays

In spite of the fact that Iren is a peaceful baby, our trip was exhausting. After several delays, we arrived in Prince Edward Island twenty-two and a half hours later. Our luggage, however, did not.

Thank the Lord for the kind man at the front desk of our hotel. He fetched robes, toothbrushes, and deodorant for us, and we stumbled into our beds—and Pack ’n Play—at 4 a.m. Thankfully, I didn’t have to speak the next day.

Kimberly, however, was not so fortunate. She also arrived at 4 a.m., but she had to speak at 9:00 that same morning.

And while I got to see my protector-husband at his finest (Trevor went to bat for us, tweeting at and calling Air CANADA in search of our bags), Kimberly had to support her husband. Literally. Within 48 hours of their arrival, he couldn’t walk without her help.

I got to connect briefly with LeRoy and Kimberly at the conference, and you would never have known they were going through so much. They were as kind and others-centered as ever.

Once the conference was over, we said our goodbyes (I wanted to get back to my hubby!), but LeRoy and Kimberly had planned to stay a couple extra days to relax.

More Delays . . . with a Layover in the Neurology Hospital

Our trip home wasn’t much easier than our trip there. I’ll take our delays over Kimberly’s any day, though. While we were delayed hours, she and LeRoy were delayed weeks.

LeRoy collapsed in the hotel lobby while they were still in PEI, and he couldn’t get back up. They arranged for an earlier flight home with a connecting flight in Texas, so they could visit a neurology hospital in Dallas. That layover and ER visit turned into an unplanned eighteen-day stay. LeRoy was finally discharged . . . with more questions than answers, and a whole lot of medical bills.

The Journey from Here

This journey is far from over for them. Would you cry out to God on their behalf? Here’s the latest update so you can pray knowledgeably.

Also, if you’ve been touched by Kimberly and LeRoy through the True Woman blog, their other writing, at a conference, or through LeRoy’s pastoral ministry, would you consider giving financially to help them pay their medical bills?

I texted Kimberly asking if they have insurance, and she told me they’re a part of Samaritan Ministries. She’s hoping that will cover a large portion of the hospital cost (which they have to pay up front), but it doesn't pay for LeRoy’s medications. And these meds aren’t cheap. These precious friends are looking to God to provide, and you can help answer their prayers.

Thanks for taking the time to read about our stories, when I know you have your own delays, illnesses, or other challenging circumstances. Big or small, may you walk intimately with God today, knowing that He is in control, and that He is good.

I leave you with this post Kimberly wrote about LeRoy while they were in the hospital. It’s one of the most touching posts I’ve read in awhile, as it shows the impact of walking with God intimately for years.

As the Wagners want more than anything else, may God be glorified through your own saga—and theirs.