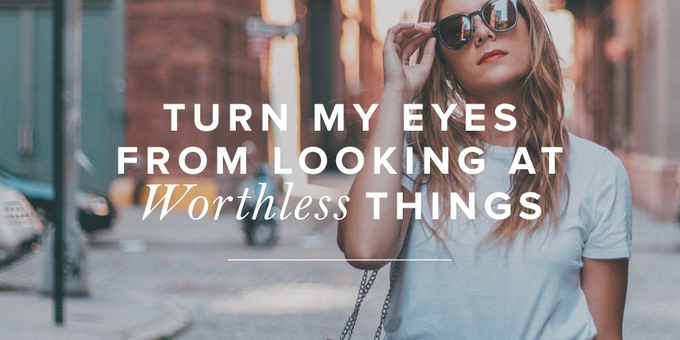 Turn My Eyes from Looking at Worthless Things

The eyes are the lamp of the body. It becomes what they behold.

Lured by desire and the passions of the flesh, the eyes look upon secret loves too dark for anyone but their Creator to fully see and know. Prone to wander, how they feel it—the pull to gaze upon worthless things . . .

She rolls out of bed and gets ready for the day, wrestling through outfits, but finally choosing the deep blue shirt. People say it compliments her eyes. Her friend, the mirror, is also her greatest foe, faithfully awaiting her gaze and reflecting what she wants to see—but only after it condemns her, only after she heeds its brutal, silent critiques.

Do people see how hard she’s working to maintain her figure and erase her years? And if they did, would it matter?

Would the mirror be any gentler, any kinder to her?

The bright screen bores itself into her brain. A constant barrage of entertainment, her phone never leaves her sight or lacks for her attention. She fears missing out—yet she doesn’t hear the flesh-and-blood voices around her when they call her name.

But it’s never enough; the attention feels like an endless black hole. She’s not even sure who she is anymore since she can change her reality at the touch of a button, with the swipe of a screen.

She’s got others fooled. She’s even got herself fooled.

It’s destroying her, the brazen image she can’t get out of her mind. It’s one in a series, and it’s shriveling her soul. She knows this—but she can’t seem to win the fight. The allure is too much, the immediate pleasure too sweet . . .

The nagging conviction too strong to ignore.

She knows she needs to tell someone, to confess everything. But she also fears the outcome, what people will think, what the consequences will be . . .

Success is her drug. That promotion? The applause and respect? The best high. She’s addicted, though she won’t admit it. She works to live and lives to work, even though her Bible tells her this will never satisfy her.

On any given day, her circumstances rule her. Failures sap her confidence and spoil her mood, while success fills her with pride and delight to keep going . . .

But how unreliable. She’s controlled by something she can’t control, and she knows it.

She wants out of ambition’s grip.

He sets His face like a flint to Calvary, refusing to turn back. He will do His Father’s will, even if it means torture and brutality, the hatred and venom of men. Even if it kills Him.

Even if it means His Father’s wrath.

He has her obsession with vanity weighing upon His shoulders and carries her selfish desire for man’s approval. He takes her addiction to lust and suffers the punishment for her idolatrous ambition.

For all their worthless loves, He loves them unto death.

Let us also lay aside every weight, and sin which clings so closely . . . looking to Jesus, the founder and perfecter of our faith, who for the joy that was set before him endured the cross, despising the shame, and is seated at the right hand of the throne of God (Heb. 12:1–2).

Sisters, friends: We will become what we behold. Look to Jesus. Take in His goodness and perfection, and see what He endured—for you. Behold His sacrifice, His life-blood spilt for you, the nails in His hands and the anguish in His soul.

Weep and mourn for what your worthless loves cost Him.

But don’t stop there.

Look to the empty grave. See how He disarmed death and triumphed over it. Behold how the chains of our sin hold Him no longer! Because He’s alive, no longer do they hold us.

Jesus died to give you life in His ways, to turn your eyes from worthless things—to Himself.

Behold Him, and as you do, your whole body and soul will be full of light.

The original version of this article first appeared at Unlocking the Bible.