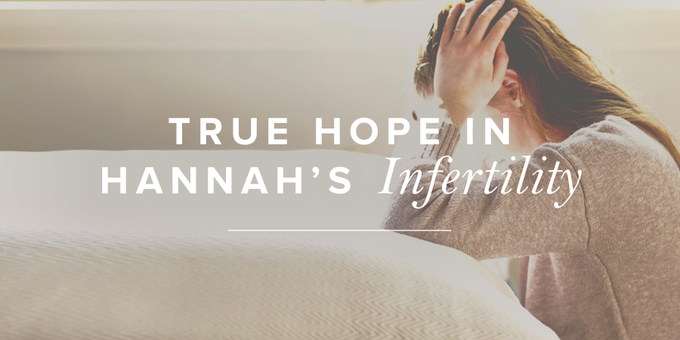 The first time I studied the story of Hannah, I was an undergraduate student at Moody Bible Institute taking a class titled, “Biblical Theology of 1 Samuel.” In the last four and a half years of walking through infertility, I’ve seen more and more how this class transformed my faith. The Lord has often reminded me of the story of Hannah, Samuel’s mother, as a source of hope and encouragement in the deepest times of despair.

We first find mention of Hannah in 1 Samuel 1. The narrator doesn’t pull any punches: Elkanah, Hannah’s husband, has two wives—one who has already given him children and another who hasn’t. Many speculate that Elkanah first married Hannah, but after she was unable to produce children, he married another woman named Peninnah. Peninnah and Hannah’s relationship wasn’t great; Peninnah “provoke[d] her grievously to irritate her” (1 Sam. 1:6).

No one knows how long Hannah and Elkanah had been trying to have children, but it’s long enough for the narrator to inform us that years have gone by and Peninnah has successfully borne both sons and daughters (v. 4). Year after year, the family made the trip to Shiloh to be able to worship God. And year after year, Hannah is left childless while her rival had more children. On this particular journey, we see Hannah so despairing that she was weeping and unable to eat (v. 7).

The conversations that come next in the passage give us a closer glimpse at Hannah’s isolation, grief and faith, and at God’s understanding.

The first conversation recorded in the book of 1 Samuel is between Elkanah and Hannah in verse 8. He asks, “Hannah, why do you weep? And why do you not eat? And why is your heart sad? Am I not more to you than ten sons?”

We don’t know Hannah’s response to her husband, though we can imagine. While Elkanah saw that she was in pain, Hannah was ultimately left alone and misunderstood.

The next conversation took place between Hannah and God. It is recorded that Hannah wept bitterly to the Lord. It appears as though the writer wants us to understand that Hannah’s approach to God was honest and raw. We don’t know much about her faith other than this moment, but we do know she relied on the One who could answer her prayers.

Hannah pleaded that God would deliver a child to her for His service. Her acknowledgement of God as the “LORD of hosts” point to her understanding that this God is all-powerful and able to deliver her (v. 11). She also recognized her place in light of His power: She was His servant.

One of the difficult realities in suffering is the truth that God is all-powerful and has the capability to remove the suffering in our lives, but He also chooses to allow the suffering to happen. Hannah’s response of worshiping God is one of acknowledgement and acceptance. She knew only He could change her situation. So she didn’t shy away from boldly approaching the One who could change her circumstances, but she also humbly accepted her place as below Him.

The final conversation is with Eli the priest. He observed Hannah praying and assumed she had came to the temple drunk. In his ignorance, he rebuked her. How painful it must have been to have not only a husband blind to your pain but also a leader blind to the truth of your circumstances.

Hannah responds to this false allegation with humility. We don’t know what Hannah was like in the years prior to this conversation: Was she embittered against her husband for taking on another wife? Was she angry at God for closing her womb? Did she begrudgingly attend these family worship gatherings each year with only lip service? What we do know from these conversations is Hannah’s state at the time of this story: humble and broken.

I can attest that years of infertility is a humbling experience, and it brings about times of utter brokenness I didn’t know I could experience. Looking back, I see how God has used this situation to break me of dreams and idols that weren’t rooted in Him. I also see how He has replaced those with the better reality that He is more than enough for me. He is the hope I need to carry on.

Hope for the Barren

It was in one of these moments of brokenness that God reminded me of Hannah. He didn’t give me a promise that I would someday have children, but He did show me that He preserved her story to teach people about Him. For thousands of years, this humble woman’s painful plea to her God has been written about, read, and spoken of for generations of God’s people to know.

The hope we find in Hannah’s life is this: God was the same yesterday as He is today, and He will be the same forever.

God hears the barren’s cries for children. The promises we can hold onto are that our God is a God of compassion, lovingkindness, truth, and sufficiency. Not only did He remember Hannah by giving her Samuel and other children, but He allows us to remember her story by making sure it was preserved for thousands of years, bringing hope and peace to us.

We may not see what the purpose of our pain is, but we can trust that God is using it for good (Rom. 8:28), just as God used Hannah’s suffering for good. The last verse of the book of Judges records, “In those days there was no king in Israel. Everyone did what was right in his own eyes.” (Judg. 21:25) In the middle of that mess, God used her barren womb to birth a prophet, her son Samuel, who guided Israel in godliness.

And just as God allowed this record to endure and used Hannah’s suffering for good, He is faithful to see and hear our desperate pleas in times of distress.

We see Hannah leave the temple, blessed by the priest and freed from her despair. Soon after, we also see her desperate pleas answered.

We don’t know how much time passed before Hannah conceived, but we do know that “the LORD remembered her” (v. 19), allowing her to conceive and give birth to a son. Even in the naming of her first child, Hannah praised God as she named the child Samuel. She knew where this blessing had come from because she had “asked for him from the LORD” (v. 20).

Though Hannah was misunderstood by her husband and spiritual authority, God saw not only her pain but her worship. When others provoked her, questioned her, and falsely accused her, God welcomed her, and Hannah approached Him with honesty and humility. She didn’t hold back her pain but laid it all before Him, knowing He could heal her.

As we stand on this side of the cross and read this story, we rejoice in an even deeper truth about our relationship with God. We, too, can boldly approach God because of the work Jesus did as our great High Priest. We have a God and spiritual authority who not only hears us but understands the pain we are experiencing (Heb. 4:14–16). When approaching Him in our pain, we can know that we are in the hands of a God who took it upon Himself to experience the full spectrum of what it means to be a human. We can approach with the confidence that He hears us, understands us, and can deliver us.

When the righteous cry for help, the LORD hears and delivers them out of all their troubles. The LORD is near to the brokenhearted and saves the crushed in spirit.

And through Christ’s death and His righteousness, we can know that God hears us and is near to us. Sometimes we just need to be reminded of it. Whatever the pain or need for deliverance, know that like Hannah, we serve the God who is “near to the brokenhearted and saves the crushed in spirit.”

Previous Post When Disappointment Digs Ditches in Your Heart
Next Post Dear Seasoned Women: We Need You

Lessons from the Waiting Room of Infertility