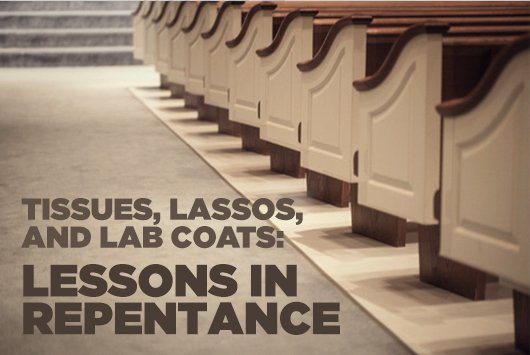 One Sunday when I was eight, I made a serious mistake at the end of church service. I had been sitting in a pew with my dad, and just before the closing song, I tucked a used Kleenex between the cushions of the pew.

Imagine my surprise when I arrived home and my dad confronted me with said tissue in hand. This event led to a discussion of respecting property, taking care of the church's meeting place, and honoring those whose job it is to clean the building. I admitted my error, expecting that to be the end of it. Oh but it wasn't.

If we're in Christ, we don't have to go with knees-knocking before God to plead for forgiveness. He's already given it. We go to have our joy restored. We go to be reminded of our salvation. We go to be near to Him.

A few days later, I found myself standing, knees knocking, before the church janitor. I had to confess my thoughtlessness, ask his forgiveness, and then offer my services to help him clean the building (free of charge, of course) for the remainder of the day. In a word, it was terrifying.

Maybe you have a story like this. For my brother, it was the trepidation of standing before a neighbor kid's parents, asking their forgiveness for having used a rope to pull their son off his bike as he rode down the street. He had simply been practicing his lassoing skills, an art he learned from our rodeo cowboy grandfather. Who knew his skills were so good?

For my husband, it was apologizing to a church visitor after commenting to his friends about her lab coat looking "dumb," a comment she didn't hear, but his pastor-father did.

Maybe it's just a pastor's kid thing, or maybe you also have a watershed moment of confession from your past. If you've ever experienced anything like this, you honestly don't think you'll survive it. If you don't vomit all over the other person, you will certainly not soon get over the horror of it all. You aren't sure you'll ever forgive your parents for making you go through this (now that we're parents, we'll probably make our kids do the same thing).

It wasn't the confession of sin in general that made it so horrifying. I grew up in the habit of confessing sin and asking forgiveness of my family. The horror was due to not having a relationship with the person whose forgiveness we were asking. I didn't know the janitor. I didn't know how he would respond. What if the woman in the lab coat got mad? What if the parents of the poor bike rider responded by yelling at my brother? They had every right—we had done thoughtless, selfish things at their expense.

When we confess our sin and repent before the Lord, however, it's a completely different story. Romans 8:1 tells us, if we've trusted Christ, "there is now therefore no condemnation." We don't have to fear the response of our Father as we confess our sin and repent of our sinful ways. In fact, rather than being something to fear, repentance can become a beautiful gift—a joy that draws us closer to our Savior.

Rather than being something to fear, repentance can become a beautiful gift—a joy that draws us closer to our Savior.

Paul writes that it's the "kindness of God" that leads us to repentance. This kindness is an outflow of His steadfast love and mercy. It's so kind of Him to show us our sin, and then remind us that Christ lived perfectly where we couldn't. Christ faced temptation and withstood it even though I didn't. I have His perfect record before the Father. Rather than running and hiding, I can confess what He already knows. I don't have to beat myself up—He is drawing me to repent so I can know joy once again.

In Psalm 51, David confessed his sin before the Lord after having an affair with Bathsheba and having her husband murdered. My favorite part of this psalm is verse 12, when David says, "Restore to me the joy of your salvation."

David saw his sin before God and was told by the prophet Nathan that God had put away His sin. Even though David didn't know the full picture of what was happening, God honored His covenant with David and put David's sin on Christ. God was "passing over former sins" in order to justify David through Christ's future work.

Before he confessed his sin, David had apparently lost his joy. He had not lost his salvation, but he had lost the joy of his salvation. He had forgotten the joy that had been his when he wrote Psalm 16:8,

"I have set the Lord always before me; because he is at my right hand, I shall not be shaken. Therefore my heart is glad, and my whole being rejoices; my flesh also dwells secure."

When the Lord graciously corrected David, he pleaded for God to restore the joy of his salvation. 1 John 1:9 says,

"If we confess our sins, he is faithful and just to forgive us our sins and to cleanse us from all unrighteousness."

If we're in Christ, we don't have to go with knees-knocking before God to plead for forgiveness. He's already given it. We go to have our joy restored. We go to be reminded of our salvation. We go to be near to Him.

Psalm 16:11 expresses this joy of nearness,

"You make known to me the path of life; in your presence there is fullness of joy; at your right hand are pleasures forevermore."

Do you ever worry you can't confess things to God? Do you run and hide or try to make up for what you've done? How have you experienced God restoring the joy of your salvation?

Previous Post What if Knowing Your Spiritual Gift Doesn't Matter?
Next Post When God Rewrites Your Job Description

Repentance Is a Posture

Does Darkness or Light Cover Your Sins?