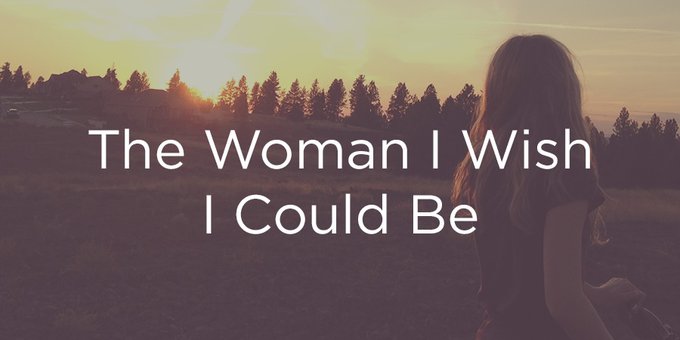 The Woman I Wish I Could Be

Do you ever feel like there's a gigantic gap between the woman you are and the one you want to be? I do. The woman I want to be lives in my mind, somewhere between the endless to-do lists and the names of all the Sesame Street Muppets. She is innately patient. Fearlessly radical. She believes that God is faithful, even when it feels like He's forgotten her. She always chooses the better thing—to feed her soul instead of her flesh, to submit instead of defy, to rejoice instead of complain. She never snaps at her children or nags her husband.

The character and quality of our life is forged in little moments.

I used to think I could bridge the gap between her and me in one giant leap. Maybe a conference? A weekend prayer retreat? But I never could make the leap. At times I thought I had, and then inevitably I would disappoint myself. Struggle with the same old sin. Fail in the same old way.

Sometime this summer it finally clicked with me. The journey from me to her is a small step journey. It is not made up of grandiose conferences or life-altering experiences. It is made up of millions upon millions of tiny moments. Paul David Tripp taught me this when he wrote,

In context, he was writing about all the little thoughts, words, and choices that shape a marriage and set the stage for the future. But this "small-moment approach" is actually a biblical way to view all of life. In Luke 16:10 Jesus says, "One who is faithful in a very little is also faithful in much."

With that in mind, I have come to pray a very simple prayer throughout the day. Whether I'm believing a lie, battling idols, or itching to erupt, in the heat of the moment all I pray is, "God, help me win this small-moment battle!" That's all I focus on. I don't think about overcoming every battle, or making a personal sanctification plan, or donning a cape and painting supermom across my forehead. I just focus on the one small battle before me, and by God's power with Christ's help, I fight to win. Then, ten minutes later, when the baby dumps a bowl of spaghetti on my mother-in-law's carpet, I pray, "God, help me win this small-moment battle!" And so it goes. Just like the righteous man of Proverbs 24:16, I may fall seven times, but by God's grace I rise again, over and over.

One at a Time

You and I don't have to become the Proverbs 31 woman tomorrow. We just have to throw ourselves upon the grace and power of Christ to live faithfully today.

You build a house one brick at a time, write a book one word at a time, and live a life one moment at a time. You and I don't have to become the Proverbs 31 woman tomorrow. We just have to throw ourselves upon the grace and power of Christ to live faithfully today. To make the wise choice. To say the kind thing. To reject the awful thought. To repent and get back up again. And one day we will look back and realize that over a lifetime—over a million small moments—God grew us (1 Cor. 3:6; Phil. 1:6).

Mother Theresa, Adolf Hitler, Martin Luther, Jessica Simpson—they all have one thing in common. They became who they are one small moment at a time. And so will we.

Previous Post Exercise, Body Image, and God's Truth
Next Post A Million and One Reasons I Am Horrified by the Planned Parenthood Video