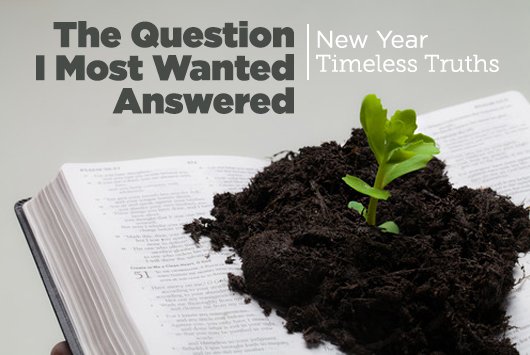 The Question I Most Wanted Answered

If we could sit down for a visit over a hot cup of my favorite beverage (chai tea with lots of cream), and you could ask me the question that I most wanted answered when I was a young woman, it would be:

"How can I grow in my walk with Christ?"

I love when women ask me that!

One thing I would encourage you to incorporate into your life, if you want to deepen your love relationship with Christ and press on to spiritual maturity, is a love for the cross; a willingness to "embrace the cross."

When I was growing up, my family lived behind the church, up a steep hill, in the woods. I often walked to church since we lived so close (and my folks were notorious for running late).

"If you would die for me, the least I can do is live all out the rest of my life for you."

Late one Sunday afternoon I was walking to the evening service by myself. I was singing, though I don't even remember what. It probably had something to do with the cross because I suddenly had a vivid and lasting impression of it. For a few moments, it felt like I was actually there, viewing Jesus' suffering, experiencing the trauma, and recognizing the weight of my sin on His ravaged body.

It totally broke me. I offered myself to Jesus that day as a living sacrifice.

I committed to Him:

"If you would die for me, the least I can do is live all out the rest of my life for you."

That was the first of many learning encounters where I've come to a deeper appreciation and understanding of what happened on the cross.

Grappling with the work of the cross, the doctrines of the atonement and grace, is foundational to grow in your walk with Christ.

When I say: "Embrace the cross" I'm really saying:

Try to wrap your heart and mind around all that is there.

Visit the cross through the Word and through your affections. Allow your imagination to be guided by Scripture to visit Golgotha—often. Ask the Spirit to quickly bring the cross to mind—the shredding of Jesus' body by the Roman soldier's whip, the flow of blood down his face, the humiliation of nakedness, and the cup of wrath He fully drank—each time your heart is tempted by sin. Allow that knowledge to drive you to repentance regularly.

Saturate your heart and mind with Scripture's descriptions of the cross.

"Knowing that you were not redeemed with perishable things like silver or gold from your futile way of life inherited from your forefathers, but with precious blood, as of a lamb unblemished and spotless, the blood of Christ."  (1. Pet 1:18–19 NASB)

"The soldiers took Him away into the palace (that is, the Praetorium), and they called together the whole Roman cohort. They dressed Him up in purple, and after twisting a crown of thorns, they put it on Him; and they began to acclaim Him, 'Hail, King of the Jews!' They kept beating His head with a reed, and spitting on Him, and kneeling and bowing before Him. After they had mocked Him, they took the purple robe off Him and put His own garments on Him. And they led Him out to crucify Him." (Mark 15:16–20)

"When they came to the place called The Skull, there they crucified Him and the criminals, one on the right and the other on the left. But Jesus was saying, 'Father, forgive them; for they do not know what they are doing.' And they cast lots, dividing up His garments among themselves. And the people stood by, looking on. And even the rulers were sneering at Him, saying, 'He saved others; let Him save Himself if this is the Christ of God, His Chosen One.' The soldiers also mocked Him, coming up to Him, offering Him sour wine, and saying, 'If You are the King of the Jews, save Yourself!'" (Luke 23:33–37 NASB)

"After this, Jesus, knowing that all things had already been accomplished, to fulfill the Scripture, said, 'I am thirsty.' A jar full of sour wine was standing there; so they put a sponge full of the sour wine upon a branch of hyssop and brought it up to His mouth. Therefore when Jesus had received the sour wine, He said, 'It is finished!' And He bowed His head and gave up His spirit." (John 19:28–30 NASB)

"Christ also suffered for you, leaving you an example for you to follow in His steps, WHO COMMITTED NO SIN, NOR WAS ANY DECEIT FOUND IN HIS MOUTH; and while being reviled, He did not revile in return; while suffering, He uttered no threats, but kept entrusting Himself to Him who judges righteously; and He Himself bore our sins in His body on the cross, so that we might die to sin and live to righteousness; for by His wounds you were healed."  (1 Pet. 2:21–24 NASB)

Study the cross by consuming large quantities of quality reading material that takes you there.

The Suffering Savior by F. W. Krummacher (A favorite of mine and one I return to regularly)

The Cross of Christ by John Stott

You can download (for free!) the excellent book by John Piper, Fifty Reasons Why Jesus Came to Die by clicking here to reach that page on the Desiring God website.

Dwell at the Cross.

Finally, fill the moments of your day with periods of focusing your heart and mind on the work of the cross and pause to worship your Savior:

". . . fixing our eyes on Jesus, the author and perfecter of faith, who for the joy set before Him endured the cross, despising the shame, and has sat down at the right hand of the throne of God.

"For consider Him who has endured such hostility by sinners against Himself, so that you will not grow weary and lose heart. You have not yet resisted to the point of shedding blood in your striving against sin . . ." (Heb. 12:2–4)

How are you embracing the cross today?

Visit my blog to view the other posts in my current "Top Ten" series.

My Son Wants to Move In with His Girlfriend. What Now?