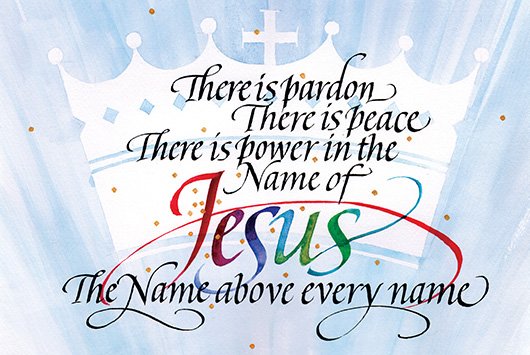 “There is salvation in no one else, for there is no other name under heaven given among men by which we must be saved.” (Acts 4:12)

The name Jesus was common in His day, yet this ordinary name became extraordinary, and down through history it has become unique. The reason for that is revealed in what the angel said to Joseph: “You shall call his name Jesus, for he will save his people from their sins” (Matt. 1:21). There has never been another Jesus like this one. His name reveals why He came to earth. It sums up His mission, His purpose, and His destiny.

Jesus is the Greek equivalent of the Old Testament Jewish name Joshua, which means “Jehovah saves.” There were two Joshuas in the Old Testament. The first Joshua led the children of Israel from the wilderness into the Promised Land. He was a prototype of Jesus—a savior, a rescuer, a deliverer.

Jesus came not only to save us from the guilt and penalty of our sin, but also to take away our love for sin.

Our Joshua—Jesus—fights our battles. He has conquered every enemy, including death, and He enables us to be victorious over temptation and sin. Our Joshua leads us into the spiritual inheritance that God has promised us, far surpassing the work of that first Joshua.

The other Old Testament Joshua was a high priest. God told the prophet Zechariah to make a crown of silver and gold and set it on the head of this Joshua (Zech. 6:11). God’s instruction was a sign of royalty. Before this, the roles of king and priest had always been separate. Here, however, they are symbolically combined in one person. This is a wonderful picture of our Jesus, who is both King and Priest.

There is no other name like the name of Jesus. There is pardon in His name. By bearing our sins as His own on the cross and refusing to save Himself, Jesus has saved us "from the penalty of sin and from the wrath of God, which we rightly deserve for our sins. He saves us daily from the power of sin. Jesus came not only to save us from the guilt and penalty of our sin, but also to take away our love for sin. And one day, we will be fully delivered from the very presence of sin.

There is power in His name. This name is what gives us access to God’s greatest treasures. Of course, we know that the power is not in the name itself but in the Person who bears that name.

Jesus’ name is precious. It is of infinite value. In fact, this common name became “the name that is above every name” (Phil. 2:9), and it is to be treated with great reverence.

“God has highly exalted him and bestowed on him the name that is above every name, so that at the name of Jesus every knee should bow, in heaven and on earth and under the earth, and every tongue confess that Jesus Christ is Lord, to the glory of God the Father” (Phil. 2:9–11).

All hail the power of Jesus’ name! Let angels prostrate fall; Bring forth the royal diadem, And crown him Lord of all. ~ Edward Perronet (1726–1792)

Has your heart been captured by this precious name? Why is His name precious to you?

The Man of Sorrows Reduced Me to Tears