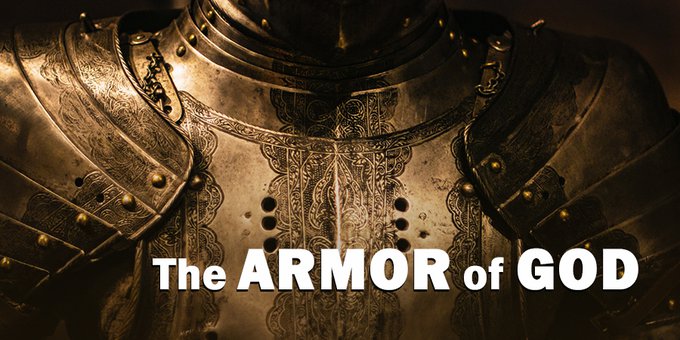 The Armor of God: Pick Up Your Shield of Faith

It goes without saying (but I’ll say it anyway) that faith is a widely discussed topic among Christian circles, for without faith it is impossible to please God (Heb. 11:6). But Christians aren’t the only ones who practice faith. For example, it takes just as much faith (if not more) to believe the earth glued itself together through a big bang as it does to believe God created the universe. The difference is the foundation of that faith: one side believes a theory, and the other believes the Bible.

No person can live completely void of faith. We all believe in something even if we don’t believe what’s true. At its core, faith is the act of trusting in something. It takes faith to sit in a chair or eat at a restaurant or go to the doctor. When I read and believe an article on the internet, I exercise faith that the author’s statements are truthful.

But God tells us there is only one consistent and valid source of truth: Him. So, in kindness, God invites the world to believe in Him. Jesus says, “Let not your hearts be troubled. Believe in God; believe also in me” (John 14:1). Yet the devil is constantly seeking to persuade us to put our confidence elsewhere. Why? Because the enemy knows that persistent and confident trust in God acts as a shield against every fiery dart launched in our direction.

The Uniqueness of the Believer’s Shield

We can try other techniques all we want, but here’s the bottom line: placing our faith in anything other than God leaves us vulnerable to the vilest, most astute, and detrimental criminal in existence, and who wants that?

We lock our doors when we’re not home and keep close tabs on our phones and purses, but how astute are we at protecting our hearts, minds, and souls? There is only one way to protect ourselves against the pervasive, intoxicating, and camouflaged lies of the devil: resilient faith in the person, purpose, and promises of God.

In Ephesians 6:16, the apostle Paul says, “In all circumstances take up the shield of faith, with which you can extinguish all the flaming darts of the evil one.” In the previous two verses, Paul instructs believers to put the belt of truth, the breastplate of righteousness, and the gospel of peace as shoes for your feet—all of which are spiritual protections we wear. However, the shield of faith is different. It is not something we wear but a defensive tool we pick up and use when circumstances require it.

The Roman soldier’s shield was called a scutum. Most scutum consisted of wood covered by an animal hide with metal trim around the edges. It was not what most of us imagine, something circular and small like a trash can lid (like what a knight in the Middle Ages carried). Instead, it was quite large, ranging about two to three feet wide and four to five feet long, resembling a heavy-duty door. As you can imagine, it took training and stamina for a Roman soldier to carry his shield.

Another neat fact is that a soldier could crouch his entire body behind his scutum when needed. In addition, soldiers could link their scutum together to form a turtle-like shell over the top of their entire unit. Unified as one, they could shield each other from falling during vicious attacks.

The Characteristics of the Believer’s Shield

In the same way, we can picture believers within the church coming alongside those who are enduring hard times and linking arms to empower and strengthen their faith. When brothers and sisters in Christ come together in truth and righteousness, united as one in the Holy Spirit, we form our own turtle-like formation that can protect us against the schemes of the devil.

But here’s the deal. Those soldiers had to willfully pick up and use their shields to guarantee any protection, and so do we. Even when we're tired. Even when we don’t feel like it. Even when it means dropping everything else to hold our shields in place, we must persist or risk serious spiritual injury, or worse, complete decimation by the enemy.

Every dart the enemy flings at us is extinguishable with God-centered biblical faith—every single one. But what is faith? Hebrews 11:1 explains faith like this, “Now faith is the assurance of things hoped for, the conviction of things not seen.” At its core, biblical faith is confident assurance God is who He says and will do as He’s said, even when we can’t see how.

The Necessity of the Believer’s Shield

The Greek word used in this passage for faith is the word pistis. It’s used over two hundred times in the New Testament, and it relates to action in almost every use just as it does in James 2:17, which states, “So also faith by itself, if it does not have works, is dead.” In other words, what good is faith if it doesn’t move us to action?

A believer with his or her shield of faith in place doesn’t tell God what to do but trusts God to faithfully fulfill His promises no matter how crazy it may seem at the time. The writer of Hebrews gives us an example of biblical faith when he says, “By faith we understand that the universe was created by the word of God, so that what is seen was not made out of things that are visible” (Heb. 11:2).

Here's the abbreviated version of biblical faith: God said it, so I believe it, and thus do I act upon it.

Faith in God is not crazy; it’s the sanest thing a person can do. We already have everything we need to protect ourselves against Satan’s schemes—an always faithful God to His unwavering Word. But if we don’t know God and we don’t know His words, we might as well hand the enemy a victory flag in advance. Even though the devil can’t steal our salvation, you better believe he will do everything he can to steal our confidence in Christ.

How to Use Your Shield

When we take God at His Word, not even a well-placed flaming arrow can penetrate our defense. Instead, we will stand firm, relentless in our pursuit of Christ and resilient in our hope of Christ.

Do you see how this works? It’s one thing to talk about faith, but it’s another thing to live it. Wishful thinking doesn’t shield us, but God’s Word does.

So when circumstances seek to make us doubt, and the devil seeks to take us out, we hold up our shields of faith by believing that God is who He says and will do all that He says, even when it looks impossible. Our confidence resides in God, believer, not in ourselves or our talents or friends or some other misguided hope.

Dear sister, if it’s fear that causes us to doubt, then it’s faith that encourages us to trust. So even if you don’t feel like it—even if you have to stop and do nothing else—hold up that shield of faith and protect yourself (along with your family) by believing first and foremost in God. Every day, no matter the day, “he is a shield to those who take refuge in him” (Prov. 30:5).

Previous Post 3 Steps to Creating an Effective Christian Message: Hook, Look, Took!
Next Post The Strong and Gentle King Sings over Me

The Armor of God: Draw. Your. Sword.

The Armor of God: Wear Your Helmet, Guard Your Mind

The Armor of God: Strap on Those Shoes of Peace

The Armor of God: Covered by His Righteousness

The Armor of God: Putting on Your Belt of Truth