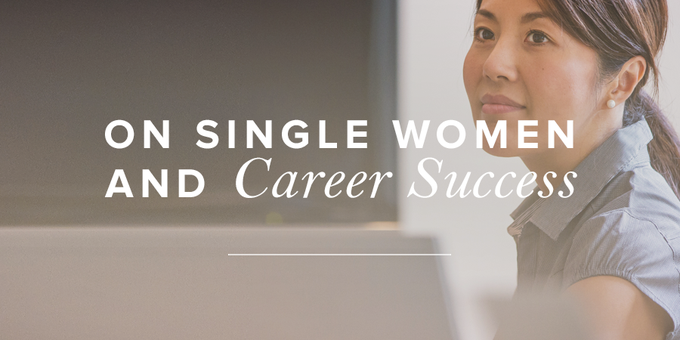 On Single Women and Career Success

A few weeks ago, a friend asked me the perennial question about single women and career success:

I’ve been told by a couple different people lately that I come off as intimidating. Upon further questioning, I think it has to do with my work. The Lord has given me some measure of direction, passion, and vision for where I am headed, so I’ve been pursuing it with more direction over the last few years. I love what I do. I think that some people see a woman who has a successful career as a woman who is choosing that over marriage.

You’d have to know this gentle, sweet friend of mine to know why this amused me so much at first. So I asked a few follow-up questions, which confirmed my inkling that the most recent man to tell her this was someone with minimal employment history himself.

Her question was very similar to one that was sent to Candice Watters, who answered it on Boundless in a column called “Successful at Everything but Relationships.” Candice sent me this column and invited feedback, which caused me to think more about it and ultimately write this post. Candice and I are friends and appeared together on a Focus on the Family broadcast about marriage and singleness a few years ago. We share a love for God’s Word, His Church, and His people. So I believe our mutual musings on these topics can be helpful because we have different life experiences, yet we are trying to live within the bounds of Scripture. Therefore, I’m taking this opportunity to add my thoughts to what Candice counseled.

It’s Not a Competition

The question Candice addressed was from a woman who is thirty-four, single, and yet to be asked out by a “marriageable, Christian man.” I’m not sure what her definition of marriageable is, which could be very telling, but that’s another topic for another day. This is what she asked Candice:

I’ve recently had two men approach me in fellowship-that-seemed-to-be-going-somewhere, but everything suddenly stopped when they saw my fully furnished apartment, heard that my car is paid for, and heard about my future schooling and vacation plans. Then each of them backed away. I actually thought they would be interested in the fact that I have a life.

Both men have degrees but no jobs at this time. Both are still great friends, but no relationship seems to be in the future. They all but said to me, “I can't provide for you; you don't need me . . .” The notion that I don’t need a husband couldn’t be further from the truth.

How can I continue to enjoy my hard-earned income and well-kept home and not scare men away? Can’t my income and assets be seen as a modern-day dowry?

I’m going to assume that this woman didn’t relate her success in an obnoxious, bragging manner because she retained the friendships of these men. Therefore, I’m going to focus on the fact that these two men are presumably also in their early thirties . . . and jobless. This is where the focus needs to be, not on the single woman. These brothers need whatever counseling, networking, and professional mentoring their fellow church members can offer to help them become employed. They also need to understand that they should not be intimidated by whatever gifts, capacities, or assets the Lord might give their future wives. It’s not a competition, my friends! Should you select such a hardworking woman as your wife, all those admirable qualities get to be part of your team!

How We View Productivity

We also need a reset on our modern understanding of productivity. As I researched my book on women, work, and the gospel, I was struck by how little we discuss some of the most obvious passages about women’s work in the Bible. Childbearing is definitely a major component of the dominion mandate given in Genesis 1:28 to “be fruitful and multiply and fill the earth and subdue it.”

But it has only been within the last 200 years that we have separated other forms of productivity and industry away from the household and its childrearing activities. For most of history, women worked very hard at two important tasks in addition to bearing children: providing food and textiles. These were not shopping expeditions. These were complex tasks that involved much skill and many people, often providing various amounts of household income in addition to whatever the family needed for its own consumption.

Unlike today’s more child-oriented schedules, families in earlier eras were oriented toward adult work. They involved their children from very early ages in the tasks required to generate household income, be it working in the family store, farm, or trade. It was only after the Industrial Revolution that the U.S. Census decided to stop measuring household wealth in favor of male wage-earner income and unhelpfully classified wives and children as “dependents.” Due to this and other factors, within a few decades the home shifted from a place of productivity to a place of consumption.

It is through the lens of our modern experience of work and home that we can read the Bible. But let’s set that aside and consider the example of Ruth. Boaz only had two pieces of information about Ruth to form his high opinion of her: 1) that a Moabitess had given up her family and her gods to follow the God of her bereft mother-in-law; and 2) that she was a hard worker.

And behold, Boaz came from Bethlehem. And he said to the reapers, “The LORD be with you!” And they answered, “The LORD bless you.” Then Boaz said to his young man who was in charge of the reapers, “Whose young woman is this?” And the servant who was in charge of the reapers answered, “She is the young Moabite woman, who came back with Naomi from the country of Moab. She said, ‘Please let me glean and gather among the sheaves after the reapers.’ So she came, and she has continued from early morning until now, except for a short rest (Ruth 2:4–7).

Like Ruth, this is the reputation we should seek as single women. We should be known as those who seek the Lord and glorify Him in our labors. In fact, this is the same commendation that concludes the book of wisdom:

Charm is deceitful, and beauty is vain, but a woman who fears the LORD is to be praised. Give her of the fruit of her hands, and let her works praise her in the gates (Prov. 31:30–31).

As I’ve written in previous posts, the challenge in our current culture is not to get swept up in the modern concept of career, which is less about serving others and glorifying God than it is about maximizing one’s status and profile. Because that’s the default setting for our times, that may be one of the reasons that single men hear my friend’s love for her job as choosing career over family.

May I appeal that we stop making assumptions and start asking questions of each other? The Proverbs 31 woman’s hard work, financial savvy, wise investments, and profitable trading were part of the reason her husband was respected at the city gates where he sits among the elders of the land (v. 23). You want to talk being intimidated by someone? It’s the Proverbs 31 Superwoman who should intimidate us all! But no one is telling her to be less than who God created and gifted her to be. Neither should we do that to one another.

Instead, let’s develop the habit of humbly seeking information. Chances are, single women who are successful now may have already thought through the implications of their choices and how they would adjust to steward new opportunities such as marriage and family. Just because an unmarried, childless woman is fully occupied with her job now does not mean she would make the same choices once she is married and mothering children. You don’t know what her plans are until you ask.

It is good to remember that no one single woman is going to be attractive to (nor attracted to) all the single men she meets. My single friends, I know it’s tempting to survey the men you know and ask why no one pursues you. Sometimes you might glean a helpful insight, but most of the time you are going to hear a lot of personal preferences that only underscore why these men have or will marry other women. And this is a good thing.

You really only want to attract the man you are supposed to marry, not a bunch of other women’s husbands. Yes, you are likely to attract several runners-up in the quest to find your husband. But please don’t diminish the skills, passions, and capacities the Lord has given you in order to make yourself fit some arbitrary standard that “all men” find appealing. You are not going to marry “all men.”

Having taken a stand for the hardworking single sister, let me now circle around to my final point. The woman who wrote Boundless described her life in terms of her possessions (a fully furnished apartment, a paid-off car), her entertainment (vacations) and her personal improvement (schooling). What I didn’t hear was how she was investing in others, including her church. Perhaps her male friends didn’t hear that, either, and unsure of how she might invest in them, they backed off. In conclusion, I echo what Candice counseled her:

You have nothing that you’ve not been given (Rom. 11:33–36)—remind yourself of that, humble yourself before God and ask Him to make you a good steward of His good gifts, and offer them back to Him in service. Ask Him to show you how you can serve others and not just accumulate more. 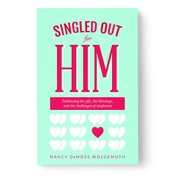 Singled Out for Him - Booklet