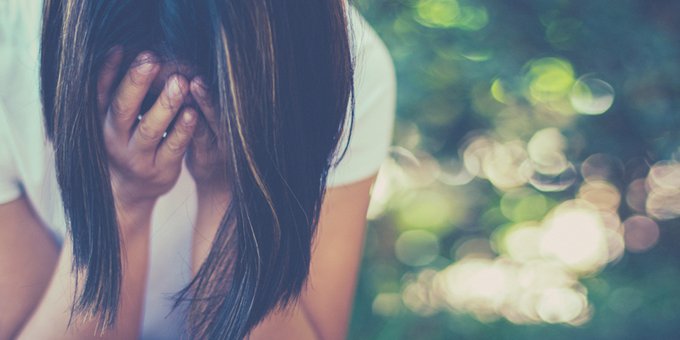 When was the last time life felt unbearable? Has the saying, “When it rains it pours” ever described your life?

Many of our trials are little more than an annoying sprinkle on an otherwise nice day: We’re late for work. The computer freezes. The school nurse calls to say Johnny Jr. has a fever. Other times, life opens the floodgates and leaves us clinging to the side of a lifeboat, clambering to get in. Or worse, we’re drowning with no lifeboat in sight.

The other night I wasn’t sure if I was facing a sprinkle, deluge, or cataclysmic flood. The hour was late, and I’d expected my daughter home long before.

I called her cellphone. No answer.

Panic didn’t seep in around the edges of my heart. It stormed in and staged a mutiny with one of its most powerful weapons—what if? This doomsday message reared its head, dragging my heart and mind into a dark place where I struggled to see past it to truth.

I’ve been training my mind to default to truth and trust in the kind sovereignty of the Lord, but this situation revealed that my training is far from over.

When a crisis hits, do you default into paralyzing fear, unable to do anything but try to manage the panic? Or are you more likely to hide behind a coping mechanism designed to deaden the pain or distract you from it? Or are you one of those who charge off in “maniac mode,” set on imposing your will upon the situation?

Fortunately, God has shown us a better way when life feels unbearable—the way of Jesus in the Garden of Gethsemane.

Then Jesus went with them to a place called Gethsemane, and he said to his disciples, ‘Sit here, while I go over there and pray.’ And taking with him Peter and the two sons of Zebedee, he began to be sorrowful and troubled. Then he said to them, “My soul is very sorrowful, even to death; remain here, and watch with me.” (Matthew 26:36–38)

Jesus’ hour had come. The agony of the cross had begun.

After He shared the Last Supper with His disciples, Jesus led them to the Garden of Gethsemane to pray. Anguish pressed in on Him until His “sweat became like great drops of blood falling to the ground” (Luke 22:44).

As much as I agonized when I couldn’t reach my daughter, I didn’t sweat blood.

What Jesus did in His suffering teaches us how we can rise in the face of suffering and move forward to the other side of the pain toward rejoicing. He teaches us to do more than just bear the unbearable.

1. Fall on Your Face before the Father and Pray

Jesus was perfect and righteous in His divine nature and ways, but He’d taken on human form. Being fully God and fully man, He felt every ounce of the excruciating sorrow before Him. The weight of the loathsome cost He was to bear on the cross would’ve crushed us. And so, He laid aside His rights as God and humbly fell on His face before His Father. And He prayed.

Prayer doesn’t change God’s plans. It brings our hearts and plans into alignment with His. It reminds us that we can trust Him—that His ways are always perfect and lead to ultimate joy.

How hard is it to give up something that will destroy you? It may be harder than you think. Our will is stubborn, and pain is real. God’s wrath is terrifying. Jesus abhorred the thought of drinking the last drop of the cup of God’s wrath for sin—the wrath we deserve, not Christ.

As God, Jesus could have refused to go to the cross to bear the unbearable. His flesh longed to avoid the wrath of His Father, but He knew it would lead to our destruction. He died to His own will because He fully trusted His Father’s.

Our fleshly will is a trap that leads to no good. The sooner we accept this, the easier it will be for us to die to our will. In all things and at all times, Jesus never doubted God. We have no reason to doubt Him either.

Trust God’s will over your own. If you must doubt something, doubt your doubts, not God.

Die to your own will by faith in, and for the sake of, the One who died for you.

3. Understand Your Limits and Depend on the Holy Spirit

“And he came to the disciples and found them sleeping. And he said to Peter, ‘So, could you not watch with me one hour? Watch and pray that you may not enter into temptation. The spirit indeed is willing, but the flesh is weak’”(Matthew 26:40–41).

When my kids were young, they’d say, “You don’t trust me.” I’d answer, “It’s not you I don’t trust. It the humanness in you. And you shouldn’t trust it either.”

Our flesh (our humanness) is as weak as the disciples’ was when they couldn’t stay awake and pray. But we have something they didn’t. On this side of the cross, we have the power of Christ’s indwelling Spirit.

Even while our old sin nature claws at us to drag us down and the enemy tempts us to doubt and fear, we have the power that raised Jesus from the dead to enable us to walk by faith, not collapse in fear.

Understand your human limits, but remember your limitless Lord. Depend on His Spirit for everything you need to walk the path He’s set before you.

Remember also that Jesus is in heaven interceding for you (Heb. 7:25; Rom. 8:34). Not even your mom’s prayers are better.

4. Embrace the Father’s Will

“Again, for the second time, he went away and prayed, ‘My Father, if this cannot pass unless I drink it, your will be done’” (Matthew 26:42).

God has a good and holy purpose for everything He allows, including evil (Prov. 16:4). Jesus didn’t question this. He embraced the Father’s will for the joy set before Him—the salvation of His children (Heb. 12:2).

Jesus didn’t simply accept God’s will; He embraced it. (If you’ve ever been the last person chosen for a team rather than the first, you know the difference between accepted and embraced.)

Trust God’s will with the pure faith of Jesus. Embrace it for the joy set before you—the good and holy purposes of God, as mysterious as they often are.

God may not always answer your prayers how you’d like, but His answer will be exactly what you’d choose if you knew what He knows.

“And again he came and found them sleeping, for their eyes were heavy. So, leaving them again, he went away and prayed for the third time, saying the same words again” (Matthew 26:43–44).

The disciples were clueless to what the next twenty-four hours would hold for them—and for Jesus. Had they known that Judas was on his way with an army, their eyes would’ve likely been wide awake with fear, not heavy from fatigue. But Jesus knew. And He didn’t just pray once or even twice. He labored long in prayer.

In fierce storms, our prayers must be equally fierce. Labor in prayer. Never give up.

How God works through prayer is a mystery, but He’s promised there’s tremendous power in it (James 5:16). He calls us to “pray without ceasing” (1 Thess. 5:17).

6. Stand Up and Get Going

“Then he came to the disciples and said to them, ‘Sleep and take your rest later on. See, the hour is at hand, and the Son of Man is betrayed into the hands of sinners. Rise, let us be going; see, my betrayer is at hand’” (Matthew 26:45–46).

While Jesus labored in prayer, His disciples nodded in and out of sleep. And then it was time to go. His betrayer was at hand.

My humanness says the time to get going was before Judas arrived with his band of soldiers, and that Jesus’ prayers seemed ineffective. His situation didn’t change. Judas still betrayed him. The Jews who should’ve worshipped Him still cried out for His crucifixion. And He still drank down God’s wrath for sin. And yet, Jesus said, “Rise, let us be going.”

Whatever you must face, after you have prayed and released your will, and once you’ve embraced God’s will, get up and get going. Christ will never leave or forsake you. Keep your eyes on His faithful character and move forward.

Remember, Jesus’ steps led Him to the cross, where only the disciple John and His mother remained by His side.

And then came resurrection.

“And with great power the apostles were giving their testimony to the resurrection of the Lord Jesus, and great grace was upon them all” (Acts 4:33).

A lot changed after the disciples’ garden nap. From sleeping when they should’ve been praying to preaching with “great power” after Pentecost, Christ transformed His disciples becauseof the burden God had called Him to carry.

Christ had agonized in the garden to the point of sweating blood, but His mind remained fixed on the Father and His will. And on the resurrection.

When life is falling apart, fall before the Father and pray. And then get up and get going in the power of His Spirit. Remember, whatever God calls His children to endure, it will not be our end. Resurrection is coming (Rom. 6:5; Rev. 20:1-15).

Do not fear. Follow where Christ leads—even when He leads you to fearful places like being betrayed by a friend, nailed to a cruel cross, or sitting on the front steps of your house willing your daughter’s headlights to shine in the distance toward home.

When It Rains, It Pours

When trouble rains down on us and life feels unbearable, fear, anger, and despair often pour out of our hearts. The one who falls before God in full surrender and refuses to doubt Him but rises in belief will move forward and pour out peace, joy, and contentment . . . unlike me that night.

Here’s the rest of the story:

I sat on my front steps and poured out ugly panic. And then my cell phone rang—my daughter!

Friends had invited her to go swimming. Since a swimming pool is no place for a cellphone, she’d missed my calls. All of them.

In hindsight, I’m thankful God let me go through this storm because it exposed weaknesses in my faith that I needed to see.

He revealed hidden pride in my heart that had led me to voice, “I trust You, Lord, no matter what” and yet mutter under my breath, “But don’t You dare cross the line of what I deem acceptable.” That isn’t faith. That isn’t the way of Jesus. It’s the way of destruction and despair. Instead, the way of Jesus pours out blessings and indescribable peace even in turmoil. Even when it rains.

Previous Post The Grounded Life Is the Good Life, Part 2: Living the Good Life
Next Post Standing on the Promise of a Straight Path