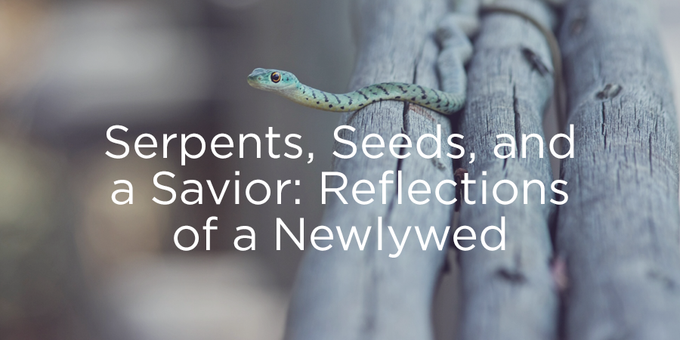 Serpents, Seeds, and a Savior: Reflections of a Newlywed

Earlier this month while beginning yet another journey through the Scripture, as a recent bride I found myself reading the account of Adam's and Eve's nuptials with fresh eyes.

I've read it perhaps hundreds of times before—God fashions a woman from and for the man then personally officiates at their wedding, thus instituting the first marriage. The groom wholeheartedly, enthusiastically receives this bride and their union as a wondrous gift from their Maker. The creation narrative ends with a commentary on marriage as God ordained it to be.

Take a moment to read it again—as if for the first time, as if newly in love, with wonderment.

Then the LORD God said, "It is not good that the man should be alone; I will make him a helper fit for him." . . . So the LORD God caused a deep sleep to fall upon the man, and while he slept took one of his ribs and closed up its place with flesh. And the rib that the LORD God had taken from the man he made into a woman and brought her to the man. Then the man said,

"This at last is bone of my bones
and flesh of my flesh;
she shall be called Woman,
because she was taken out of Man."

Therefore a man shall leave his father and his mother and hold fast to his wife, and they shall become one flesh. And the man and his wife were both naked and were not ashamed (Gen. 2:18-25).

It is all stunningly good, beautiful, pure, and right. And they all lived happily ever after. The End.

Oh that it were so.

That phrase jolted me in my reading. So abrupt. So disruptive, falling as it does in the midst of such ecstasy. I ended up parked in this passage for the next several hours, meditating on the progression, contemplating its implications for my own life and marriage.

God had acted magnificently and magnanimously on the stage of history. The God who eternally existed in relationship with the Son and the Spirit had lovingly fashioned one indissoluble union of two distinct, complementary beings. A union designed in His infinite wisdom to reveal the oneness of the Godhead. A union intended in time to tell the redemptive story, even before there was any need for redemption.

Suddenly, over this spectacular sunlit scene, there falls a sinister shadow.

The serpent. "More crafty than any other beast of the field that the LORD God had made" (Gen. 3:1).

Without invitation or warning, but with wily intention, the crafty creature slithers into the newlywed bliss.

Apparently ignoring (or avoiding) the man, he singles out the woman. Separates her from the man in whose heart and embrace she has been tightly held. Ripping apart limbs, veins, and sinews God has knit together.

A solitary seed of doubt is sown in the woman's mind as the deceiver disputes the word of his Sovereign and hers. A seed that will quickly take root, giving birth to disillusionment and disobedience, bringing forth a bumper crop of destruction. Destruction of the bride's tender heart, her marital euphoria, her children yet-to-be-born, the entire human race.

In the span of just one chapter (page 2 in my Bible), intimacy is broken, fear replaces trust, blessing turns to curses, vulnerability is exchanged for hiding. And shame wraps itself like a foul blanket around the couple once covered with the glory of God.

A Serpent in Pursuit

I landed in this passage seven weeks to the day after my marriage to Robert Wolgemuth. We are still very much newlyweds. Very much in love. Still amazed at what God has brought to pass. Still in awe of the gift God has given us in each other. Still enthralled by and exploring the wonder of what it is to be "one flesh."

And already aware of the presence of the serpent in our marriage. An intruder who knows better than most what God intends for our marriage to be—one who despises the One who joined us together and hates the Story our marriage is meant to tell.

This villain, disguised in a cloak of light, posturing as a voice of reason and rightness, comes to me in unguarded moments. He comes to us in the sweet garden of our newfound love and plants in the soil of my mind seeds of doubt about things God has revealed to be true; conjures up fears that my Creator may not have my best interests at heart; beckons me to exalt my will over God's, to imagine that my way is superior to His, and to strike out independently of my God and my groom.

I recognize the serpent's subtle but nefarious influence:

Genesis 3 reminds me that none of this should come as a surprise—that I am not the first bride to hear and to heed the serpent's siren, that his tactics were first tried on newlyweds, that he aims to separate what God has joined together.

It reminds me that pain and alienation and broken promises are the fruit of trusting the serpent rather than the One who made and married my mate and me.

It also reminds me that no sooner had that first bride succumbed to the serpent's sound than another seed was sown—sown by a God who pursued the wandering woman's heart with infinite mercy and grace, the seed of the gospel, of promises made and kept, promises of a bruised Seed who would one day rise up to crush the serpent's head.

It reminds me that my hope and the well-being of our marriage do not rest in my husband's strength or mine or in our determined efforts to do this well. Our hope is in that holy Seed, wounded for us, who took our shame as His own, gave Himself up for us, and clothed our nakedness with garments of His own righteousness acquired by the shedding of His blood.

This Savior will enable us to hold fast to one another, to love each other deeply, selflessly, and faithfully, to live as one flesh, to humbly, joyfully fulfill our God-given responsibilities in this marriage, to escape the serpent's entreaties, to walk together in the light with our Maker, to be forgiven when we fall, and to join Him in overcoming the serpent's evil designs.

We—my new husband and I—cling to our Savior's promise that one day we will experience the full blessings of the New Creation, we will be part of a holy, redeemed bride at the Marriage Supper of the Lamb, and we will reign with Him in paradise. Forever.

30 Pieces of Advice for the New Wife