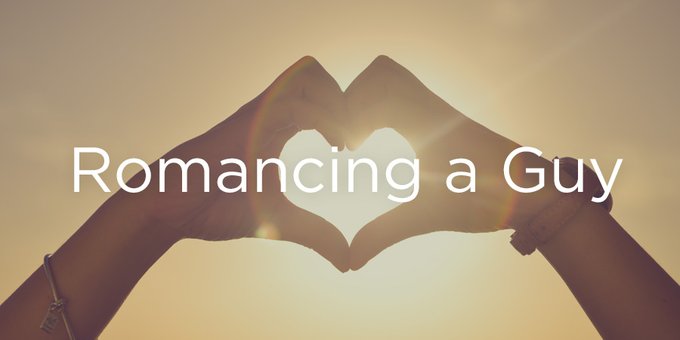 I have a theory that men desire romance just as much as women. I think they just define it differently. At least that's what I'm beginning to think as I find myself quietly studying my husband. What would he find romantic? I already know the answer is not endless conversation or a sparkling toilet. Those things speak to his heart about as much as a power drill on my birthday would speak to mine. But that doesn't mean he has no need for romance.

After all, you don't have to be female to long for someone to know you or to be delighted that someone has discovered you. To romance someone is to capture their affection by speaking in a language that touches them. It is to "see" inside of them and openly demonstrate that what you've seen is lovely. I don't think there's a manly man in the world who doesn't desire that to some degree. So . . . how do you romance a man? Obviously, all men are different, but at the risk of being written off, I am going to make three sweeping generalizations that I think will hold true for most men.

You need to listen to your husband, even when it's boring. This is critical. Women always complain that men don't talk, but I think what we really mean is they don't talk about what we want them to talk about. Ask him about something that's interesting to him, and I guarantee he'll say something . . . you'll just probably have tuned out about two minutes in.

I'll learn everything there is to know about football if it means he'll talk to me when he's hurting.

A professor's wife first opened my eyes to the importance of listening to a man by making a terrifying statement. She said, "When we don't actively listen to our husbands, we teach them not to talk to us." Yikes! I cannot tell you how many times my husband has started to jabber about something as interesting as snail slime, and suddenly, just as I'm starting to tune out, I hear my professor's words in my mind. I snap to attention and engage. "So why does the carburetor do that? What's so great about that commentary? Who's the best player on the team?" Sometimes it gets interesting, and sometimes it stays as boring as snail slime. But you know what? I'll learn everything there is to know about football if it means he'll talk to me when he's hurting.

Listening is a segue to the heart. It is an opportunity to actively practice Philippians 2:4: "Let each of you look not only to his own interests, but also to the interests of others." In other words, in those moments when I'm silencing Downton Abbey to listen to all the features of the new Honda Odyssey, my husband and I are forging a trust. We're building intimacy that says, "I care about you. I care to know what you're thinking about. I care to have a relationship with you."

Listening is also the first step toward romancing him, because it causes you to think the way he thinks. Maybe he talks a lot about a particular band, so this Valentine's Day (because you're listening), instead of surprising him with a special meal, you surprise him with tickets to a concert. Or maybe he mentions that he's always ready to crash around 2 p.m. at the office, so you show up at 2 p.m. with Starbucks and a note. Now you're speaking his language—and that's romance. (PS: In order for him to talk, occasionally you will need to stop talking. This was a revolutionary insight for me.)

There's really not a whole lot a guy needs. Honestly. This is one of those surprising things I'm learning from my husband. Female relationships are so complex because the majority of our needs are internal. We don't just want flowers, we want him to connect with us emotionally. However, I think most men see outward action as inward connection. Listen to the way they brag—it's almost always action-based.

Take my brother-in-law, for instance. He's a woefully sleep-deprived pediatric neurosurgery resident. You know what he brags about? The way the whole house could be a wreck but his wife will always have a clean bed with fresh sheets just for him after he's worked thirty-six hours straight. I once heard a famous pastor brag about the way his wife fixes him his favorite breakfast every Sunday morning before he preaches. Basic needs lavishly met. I think it ministers to men more than we realize. At least I'd wager it's more romantic than keeping him up all night so we can talk about our feelings.

We've talked about two basic needs—sleep and food. Perhaps you're thinking of one other need I've failed to mention. Let me just say, yes, I believe it matters, too. Honestly, it probably matters more than any of the others! Don't just meet his needs, meet them generously. Freely. Joyfully. Do I need another adverb? Eagerly. Wholeheartedly. Meet his needs, knowing that you are actually pursuing his heart.

Because of Ephesians 5 and numerous Christian books, I knew one thing loud and clear before marrying Clint—he craves my respect. What's more, respecting my husband is a biblical mandate (Eph. 5:33). Okay, but what on earth am I suppose to do? That's what I always wanted to ask. As a young bride, I didn't really get how to "accomplish" this mandate. Do I just say nice things to him? Tell him I think he's manly? I often wished there was a secret manual of "ten easy steps to make your husband feel respected" so I could check them off.

Remember—that moment when you least want to give respect is your greatest opportunity to demonstrate it.

I look back at that young bride and sort of laugh at her naivety. Because now I get it. The funny thing about respect is it's more easily identified in its absence than its presence. In other words, disrespecting my husband is what finally taught me the nature of respect. It's not an action; it's a heart attitude. That young bride lying awake at night wondering how she could demonstrate respect for Clint already respected him in her heart. But the longer we were married, the more I saw his flaws, and the more my heart waned in respect. Which brings me to the greatest lesson I have ever learned regarding respect: Like faith, respect is proven truest through fire.

I once asked Clint what I could get for his birthday that would really show him I loved him. He told me, "Honestly, what would really make me feel loved is if you showed me grace when I fail." I think I bought him a paintball gun. But his words have haunted me ever since. They will often come rushing to mind in the midst of a fight when I'm so angry I'm ready to go for the jugular—to say something devastatingly disrespectful. In that moment I think, This is when it counts, Jeanne! All the birthday presents in the world can't speak as powerfully as that moment when I'm most angry and I choose to respect him anyway. Remember—that moment when you least want to give it is your greatest opportunity to demonstrate respect.

I like to blog about things I'm weak in—eating well, shepherding my children, waiting on God, romancing my husband . . . These are all things I find vastly important, and part of the reason I write about them is because I want to grow in these areas. But the danger in blogging is that I may give off the appearance that these are the things I'm strong in. I don't want to do that, mainly because I don't want to go to bed at night feeling like a phony. And I don't ever want a reader to have that discouraging thought—she has it all together, and I don't. What a load of hogwash! Let me say it again—these are the things I'm weak in. If I wanted to write about the things I'm good at, I'd write about ping-pong.

So as you think about romancing your husband, remember Christ's own words to Paul in 2 Corinthians 12:9: "My grace is sufficient for you, for my power is made perfect in weakness."

We serve an infinitely good and gracious God, One who is able to do far more than we could ask or imagine (Eph. 3:20). From one wretch, saved by grace, to another—I can promise He will never give up on you. No marriage is beyond His ability to save, restore, and bless. That I know from experience.