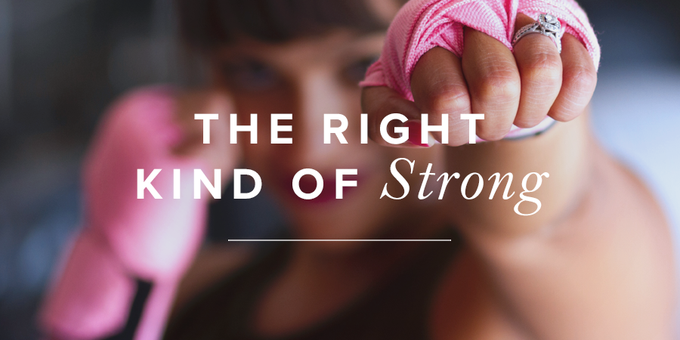 The Right Kind of Strong

I was good at arm wrestling.

And proud of it.

I could defeat all the girls at my middle school and many of the boys too.

As the only girl in a household of six kids, I was bent on proving that I was just as strong as my brothers. Anything they could do I could do better. Hitting a baseball? Performing a daredevil balancing act across the train trestle? Building a woodworking masterpiece in Dad’s garage? Scuttling up a tree? Collecting a handful of slugs? No problem. I could do it.

My can-do attitude was bolstered by the rise of second-wave feminism. During my childhood the airwaves were filled with Girl Power anthems. I knew most of the lyrics by heart and often hummed them under my breath as I went through my day. Nancy Sinatra’s “These Boots Are Made for Walkin’” convinced me that a strong woman crushes any man who dares cross her. Look out, guys . . . one of these days my boots might just walk all over you!

Aretha Franklin’s catchy tune empowered me to demand boldly that my five brothers (and all the other males in my life) respect me. And then there was Helen Reddy’s “I Am Woman,” which reinforced that I ought to be strong . . . invincible even.

I was sure that being strong and invincible was what womanhood was all about. Little patience did I have for girls who didn’t grasp this fundamental concept.

The other girls were content to enroll in the obligatory home economics course. Not me. I lobbied my principal to let me take mechanics/shop and drafting with the boys instead, and I think I got the best mark in the class. I was a go-getter. A leader. I started a small business. I started a rock band. I was president of the Christian club.

After I finished high school at age sixteen, I convinced a major department store manager to hire me as a night janitor—a physically demanding position that had, up until then, only been filled by burly males. The salary was four times higher than what I could have earned as a sales clerk or secretary. In the interview I pushed for the opportunity to prove that I could do the job as well as any man. I knew when they probationally hired me that I would need to do it even better.

I saved up enough money from that job to spend almost a year in Europe and to support myself through college. Of all my six siblings, I’m the only one who earned a professional degree and an opportunity to climb the corporate ladder. These were lofty achievements for a child of a family of poor immigrants, and especially for a girl.

I was a strong woman.

That is, I was strong in all the ways the world admired.

But as the years passed, I began to suspect that I wasn’t nearly as strong as I made myself out to be. The more I read the Bible, the more it challenged my idea about what it truly meant to be strong. I realized that bending my will to do what God wanted me to do required a strength I did not possess. I was strong enough to demand my rights, yet not strong enough to relinquish them. I reluctantly concluded that what I extolled as strength was often little more than stubbornness, insolence, self-sufficiency, and prideful self-promotion.

And then there was Pearl Purdie.

That was her name.

Pearl attended the church I grew up in, the little pink church on the corner. In my teens and early twenties, Pearl invited me over to her home from time to time to sip Orange Pekoe tea and play some rousing games of shuffleboard.

Pearl was old. Very old. She had tiny blue veins. Blue hair. Dentures. Coke-bottle glasses that made her right eye look bigger than her left. She stood at four foot ten—maybe. And that was with her sensible Aerosoles Mary Jane pumps on. Pearl was so frail that a high wind could have snapped her in half.

She didn’t have a college degree.

She hadn’t climbed up any corporate ladder.

She didn’t have the assertive, self-confident swagger of all the powerhouse female achievers I normally hung out with.

But as I got to know her, I discovered that she was a truly strong woman.

Curiously, she seemed even stronger than the strong women I admired and tried to emulate.

Pearl didn’t exhibit the brash, sassy, self-serving, demanding kind of strong that the women’s movement had cultivated in me and many of my peers. Hers was a different kind of strong. It was far kinder. Far more beautiful. Far more certain. Far more genuine. Far more profound.

Pearl’s strength was accompanied by a quiet and gentle spirit. The kind of womanly spirit that the Bible informs us is exceedingly precious to God (1 Peter 3:4). She was a woman of faith with deep, unshakable convictions. This sweet, gentle woman was fearless. Resolute. Passionate. Bold. An eighty-something, four-foot-ten, Orange-Pekoe-tea-sipping, shuffleboard-playing spiritual-giant slayer. A force to be reckoned with.

I learned from Pearl that godly strength has a far different texture to it than worldly strength. I also learned that strength can come in all sorts of shapes and sizes.

Pearl was Pearl. She didn’t need to get a professional degree, climb the corporate ladder, or adopt a different set of personality traits to be a strong woman. She didn’t need to be young, sexually attractive, and full of energy either. When Pearl’s eyesight failed and she was no longer able to strap on her Mary Janes, play shuffleboard, or make the perfect pot of tea, her inner strength continued to shine through—and even brighter—right to the end.

Pearl was my hero.

She was a woman who had made a lifelong habit of clothing herself with the right kind of strength.

Our heavenly Father wants all his girls to be strong. He wants all of us to clothe ourselves with strength and dignity and make our arms strong.

You may be an introvert or extravert. Love pink or hate it. Work as a CEO or a waitress. Know your way around the kitchen or around the racetrack. You may be the type of girl who lists perfume on her Christmas wish list, or the type who’d rather receive a power tool. (Brent, if you’re reading this, I’d like a Bosch or Makita power planer, please.)

Regardless of our varied personalities and interests and gifts, we can all become strong, godly women.

I suspect the reason you picked up this book is that you want to be strong. Maybe you’ve had a Pearl in your life who has inspired you with a vision of spiritual strength, a godly older woman who has modeled it well. Or perhaps you suspect that the popular formula for what it means to be a strong woman is lacking and misses the mark. Maybe you feel weak and inadequate. Maybe you’re tired of merely pretending to be strong.

Whatever your motivation, rest assured that your desire to grow stronger is in line with what God wants for you.

He does not want women to be weak and wimpy.

He wants us to be the right kind of strong.

This post is excerpted from The Right Kind of Strong: Surprisingly Simple Habits of a Spiritual Strong Woman (Nashville: Nelson, 2019).

An Open Letter to the Smart, Successful, Strong Woman