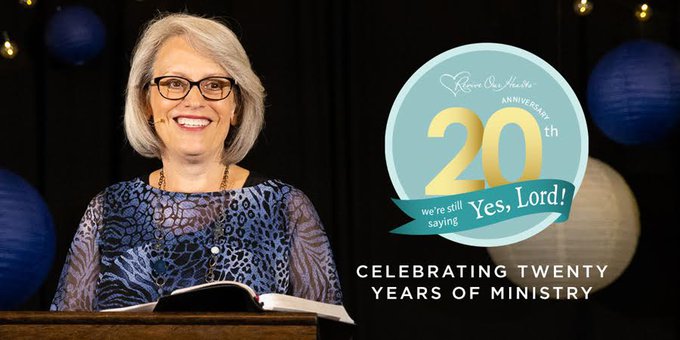 Revive Our Hearts: The Birth Story

More than one girl, I suppose. What was born on September 3, 2001, when the voice of (then) Nancy Leigh DeMoss reached across the airwaves on Christian radio stations all over the United States has now blossomed into a movement of millions of women whose lives have been touched by the ministry of Revive Our Hearts.

This week we’re celebrating twenty years of God’s faithfulness to the ministry. What would a birthday party be without a look back at the baby book? This is the story of how God birthed a countercultural movement through one woman’s willingness to say, “Yes, Lord.”

From a young age, Nancy journaled her thoughts and plans, her praises and prayers, and the years leading up to the launch of Revive Our Hearts were no different.

What Can Be Done to Turn the Tide?

I have been reading about the historical development of secular and religious feminism. My spirit is exercised within me. . . . As I read their writings, I am angry at the powerful lies that have been foisted on a whole generation of women, at the pervasiveness of feminist thinking in our whole culture, and at the extent to which Christian women have bought into the whole philosophy.

What can be done to turn the tide? What does God want me to do? A handful of women have succeeded by their writings and influence in destroying and brainwashing an entire generation with their godless philosophies. What could God do with a handful of women who were determined to “reclaim surrendered ground”?

I don’t have in myself the ability, the courage, or the drive to tackle this matter in the way it needs to be done. But I can’t help but wondering, what if this issue were crucial to bringing our generation back to God and His Word? What if this is a necessary part of “turning many to righteousness” in preparation for a visitation of God from on high?

O Father, I ask that You would guard my heart; protect/keep me from the evil one; guard my mind. Help me to understand Your heart, Your ways, and Your Word. Grant me courage to face whatever task You place upon me. May You be glorified and Your ways exalted through my life.

A Life in the Lion’s Den

Nancy had asked two big questions: what can be done and what does God want me to do? Two days later, those questions were still on her mind.

“One man of you shall chase a thousand: for the Lord your God is He who fights for you, as He promised you” (Josh. 23:10 NKJV).

This word gives faith to my heart, as I have been contemplating the possibility that God might want me to become more engaged in confronting the influence of feminism by promoting a biblical view of womanhood. I have felt that to do so would be to spend the rest of my life in the “lions’ den”—and to take on a battle that there is no hope of winning—the enemy has done such a masterful and thorough job of deception and devastation.

But I am reminded of numerous situations in which God placed His children in a position where they were hopelessly outnumbered—that He might show them that “the battle is the Lord’s.” If this is a battle of His choosing for me, then He will fight for me; He will conquer the unconquerable; He will cause the walls of Jericho to fall; He will defeat the enemy, no matter how numerous or deeply entrenched they may be.

A vision began to take shape in Nancy’s mind . . . and her heart.

“Sing, O barren one, who did not bear;
break forth into singing and cry aloud,
you who have not been in labor!
For the children of the desolate one will be more
than the children of her who is married,” says the Lord.
“Enlarge the place of your tent,
and let the curtains of your habitations be stretched out;
do not hold back; lengthen your cords
and strengthen your stakes.
For you will spread abroad to the right and to the left,
and your offspring will possess the nations
and will people the desolate cities.” (Isa. 54:1–3)

The Holy Spirit quickened this passage to my heart this morning. Are you wanting to make me more fruitful? Are there steps I am to take to “enlarge the place of [my] tent” in preparation for the blessing to come? Are you planning to give me spiritual “offspring”?

I envision countless women being set free from sin, self, pride, rebellion, and bitterness—released to love God with all their hearts, to love their husbands and children, to populate our desolate, ungodly communities.

I Want to Be in the Boat with You

As the world prepared for the turn of a century, Nancy was beginning to prepare for a turning of her own.

Two days ago, I met with the FamilyLife team in Little Rock to discuss the possibility of launching a radio program for women. This thought has been simmering in my heart for the past couple years, and I sense the Lord is now pressing me to give it more serious consideration.

My mind and heart are flooded with a multitude of thoughts as I contemplate this challenge. I feel a bit like Moses at the burning bush, telling God all the reasons I am not qualified to fulfill His call and fervently hoping He will raise up someone else for the task!

Interestingly, like Moses, when I was half the age I am now, I had all kinds of aspirations and self-confidence. But now, when it may be God’s timing to thrust me out, I am filled with reservations and reticent to step out.

I am torn between that lifelong vision of 1 Corinthians 7—the call as a single woman to wholehearted, reckless abandon to the will of God—and my natural longings for “normalcy,” security, and a private life of my own.

This undertaking would require:

I must know You are the One calling. And then, You must give me grace to say, “Yes, Lord.”

Letting Down the Nets

How would she know whether it was God who was calling? Nancy looked to the only place she knew to find wisdom: in the Word of God.

Faith in and obedience to His word paved the way for the miracle. Futility and fruitlessness gave way to abundance. As He is wont to do, Jesus didn’t just give an average (or above average) catch. He demonstrated His great power by providing an abundant, overflowing catch. “Much fruit” is the result of abiding in Him—of walking in faith and obedience.

I don’t want to settle for small, predictable outcomes that are merely equal to time and effort expended. If and when You want to send a “great catch” of souls, I want to be there in the boat with You, letting down my nets at Your word. I want those around to be astonished at what You do that exceeds all human possibilities. Grant, I pray You, much fruit, for Your glory alone, and for the sake of Your great kingdom.

I drove down to the lake tonight to read, pray, watch the sunset, etc. Through all of my Christian life, I have known His calling: to launch out into the deep; to walk by faith; to make His wonders, His beauty, His glories known, to the fullest extent possible—to the ends of the earth.

As best as I can hear the Shepherd’s voice, I feel I need to move in this direction—to develop demos and have them evaluated by spiritually discerning Christian leaders and radio industry leaders—to give God the opportunity to show that He is or is not in this.

Leaning on the Everlasting Arms

In June of 2000, Nancy placed a call to Bob Lepine of FamilyLife Today to tell him that God had confirmed in her heart that she was to proceed with the launch of a radio ministry. She later wrote in a letter: “As soon as I hung up the phone that day, with tear-filled eyes and quivering voice I sang all four stanzas of ‘Leaning on the Everlasting Arms.’”

Over the next six months, the Lord forged a partnership between three national ministries—Life Action Ministries, FamilyLife Today, and Back to the Bible—that came together to begin this new ministry. It was determined that Revive Our Hearts would become the successor program to Elisabeth Elliot’s Gateway To Joy when she retired from radio in the fall of 2001. Soon, Nancy recorded the first radio programs with thirty women in a small classroom at Summit Church in Little Rock, Arkansas. On September 3, 2001, Revive Our Hearts was “born” as a nationally syndicated radio program calling women to freedom, fullness, and fruitfulness in Christ.

When a child is born we often acknowledge that it takes a village to raise them into the people God intends them to be. Looking back, it’s clear that the same is true for the birth of a ministry. What started with one woman asking two questions: What can be done to turn the tide? What does God want me to do? has grown into a global staff reaching women around the world.

As we celebrate the twenty year anniversary of Revive Our Hearts, our hearts overflow with awe and praise for what the Lord has done! The questions haven’t changed. There are still plenty of voices calling women to follow ideals that are contrary to God’s Word. As you consider what God has done with Nancy’s willingness to say yes, dare to dream what He might do with your obedient surrender in the next twenty years (and beyond) and ask:

What can be done to turn the tide?
What does God want me to do?

Lord, thank you for all you’ve done. Whatever it is you’re requiring of us at this moment, give us the grace to say, “Yes, Lord” for your glory alone. Amen.

Celebrate Revive Our Hearts’ 20th Anniversary with us! Join the team October 8–9 at Revive ’21: Grounded. We can’t wait to be with you in Indianapolis! Can’t join us in person? You can participate online! Register now at Revive21.com.

Previous Post Dear Next Generation
Next Post Looking Back: A Conversation with Nancy on Revive Our Hearts’ 10th Anniversary

On the Eve of Twenty Years