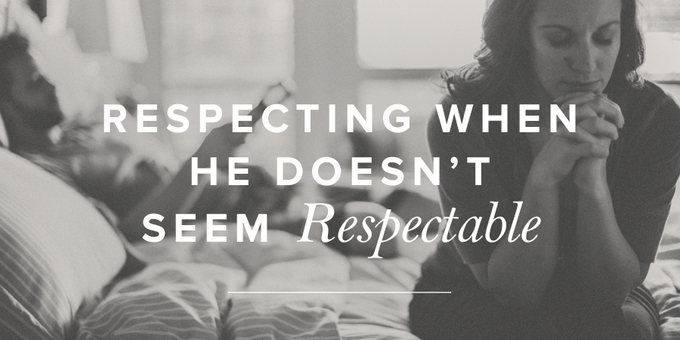 Respecting When He Doesn’t Seem Respectable

A few months after we got married, my husband and I took the five-hour trip to go visit my parents over Labor Day weekend. While we were there, my mom made the offhanded suggestion that we come back in October to celebrate Ken’s birthday.

I thought this was a splendid idea! Ken was part of our family now, and I knew my relatives would do me proud and shower him with gifts, time together, and a personalized cake. It’s what we did.

But when I looked over at Ken after the suggestion was made, he did not look excited. In fact, he looked downright grumpy. I was mortified! He was not doing me proud. I tried to offset his obvious ingratitude with an extra dose of enthusiasm on my part.

What Is His Problem?

Ken eventually drifted out to the front yard and sat down on my parents’ front curb. This was not normal. Nobody had ever gone out to sit on my parents’ curb for as long as I could remember. We always sat together on the back deck or in the living room, enjoying each other’s company. What in the world was going on with my new husband?

I marched out there to find out. “What is your problem?” I asked with folded arms and a trace of disgust. “What are you doing out here?”

He said, “Shannon, I don’t want to come back here in a month. We can’t come see your parents once a month! And besides, that’s not what I want to do on my birthday. It’s just not!”

I was outraged! Couldn’t he see what gracious, generous people my parents were? Why would he not want to come back in a month? Didn’t everyone go see their parents on a monthly basis?

There’s something I didn’t realize as a young wife. I knew that I was supposed to respect my husband. I just didn’t know that taking control was disrespectful. Yet every time I took over, made decisions without consulting him, discredited his viewpoint, rolled my eyes, or spoke over him, my husband felt disrespected—which only made him become withdrawn and angry.

From his perspective, why would I grab the reins if I trusted and respected him as a leader? He didn’t say this out loud, (I think because of the deep shame a man feels when he is treated with disrespect) but he was deeply wounded by my disrespectful attitude.

A controlling wife is not a respectful wife. Try controlling your husband and respecting him at the same time. It’s like walking in two directions at once. But God, the designer of marriage, says that wives are to respect their husbands. Consider 1 Peter 3:1–2:

Likewise, wives, be subject to your own husbands, so that even if some do not obey the word, they may be won without a word by the conduct of their wives, when they see your respectful and pure conduct. (emphasis added)

These verses bring up the complexity of our problem with control. The whole reason we want to take control is because our husbands are lacking in some obvious way. When my husband sat on the curb that day, he was not a picture of godliness and honor. True, he felt trapped by a wife who wasn’t even respectful enough to get his opinion. But it was his birthday, for crying out loud! He had decided he was not going to budge. So there he sat, sulking.

Well, I couldn’t just stand by and do nothing, could I? I loved this man! I wanted my family to love him. I felt compelled to show him his error and head off the problems that I thought I could predict.

So what’s a wife to do when she sees something lacking—or even downright wrong—in her husband’s attitude or behavior? Read those verses from 1 Peter 3:1–2 one more time, and consider with me five principles that can give guidance to wives in all stages of marriage:

1. A wife has powerful influence.
A wife can’t control her husband, and she shouldn’t try. But this man chose her out of all the women in the world. She moves him. Nobody pushed him down the aisle. He chose to walk it. He chose her.

Because of this, the verse says that she can “win” him over to what is good and right. She has deep influence with him. But she should be sober and cautious about the way she uses that influence. Shame, nagging, and manipulation can work wonders (think Samson and Delilah). But a godly wife influences her husband to do what pleases God, not just what pleases her.

2. A wife’s primary influence is not with her words.
This is counterintuitive for most wives. We are so gifted with communication, and we’ve seen the powerful way our words can create an effect. But our husbands are most deeply influenced, not by the words we speak, but by the lives we live.

3. A wife’s sexual purity and respect matter to her husband.
To wives wanting to influence their husbands for good, Peter names two behaviors to focus on. Interestingly he doesn’t mention housekeeping, cooking, or childcare—which we tend to put the most emphasis on. Instead, he speaks of respect and purity.

Why these two? Because nothing matters more to a husband than whether his wife is sleeping with only him and whether she respects him. Conversely, nothing cuts him deeper than her unfaithfulness or disrespect. A wife can’t expect to influence her husband if she is not respectful and pure.

4. A wife’s purity and respect shouldn’t be contingent.
A godly wife would never say that her sexual purity and faithfulness to her husband is contingent on his behavior. But plenty of wives make respect contingent on a husband’s behavior. They say, “I can’t respect him when he acts that way.” Yet Peter seems to put respect on par with purity (v. 2). That’s quite striking—especially given the way wives often shrug off their disrespect. But God doesn’t shrug it off.

5. A wife’s respect and purity reveal her view of God.
So how should a wife influence a husband who isn’t obeying God (v. 1)? She should respect him and be pure—not because her husband is worthy, but because God is.

A wife’s respect and purity ultimately say something about her view of God, not necessarily her view of her husband. By showing respect to a husband who clearly does not deserve it in the moment, she shows that she honors God and entrusts herself to Him. This stands out to a husband. It’s enticing to him. It lowers his defenses and draws him closer to his wife—and her God. Trying to control him does just the opposite.

After twenty-one years of marriage, Ken and I can look back at that conversation on my parents’ front curb and laugh. God has been faithful to show us our sin, and He’s often used marriage to reveal it. I’m also happy to report that we now live just a few miles from my parents—who love Ken dearly, and we’re both happy to spend time with them regularly.

As a wife, you may be disgusted with various character traits and habits of your husband. But when you lunge for control, he perceives this as disrespect and you limit your own influence for good. God invites you to trust Him with the outcomes and quietly respect your husband instead of control him.

What things would you most like to change in your husband (or someone else)? How do you try to take control? How does your husband (or others) perceive this as disrespect? How would trusting God help you to be respectful in this situation?

For more information on Shannon’s book Control Girl: Lessons on Surrendering Your Burden of Control From Seven Women in the Bible, go to ControlGirl.com.

Previous Post Does the Church Need a Startup Mentality?
Next Post Be an Oasis to Wives in Desert Marriages