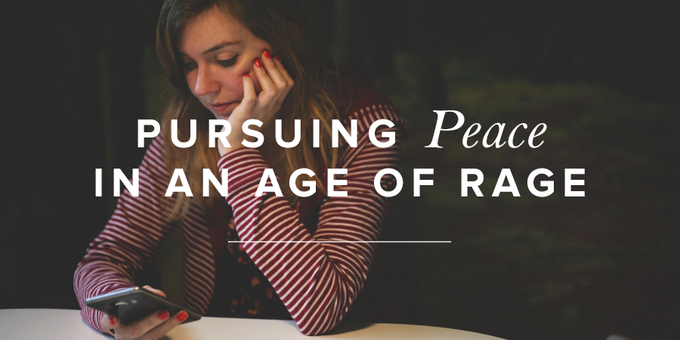 Pursuing Peace in an Age of Rage

I don’t know if you’ve noticed, but peaceability is not popular. Outrage is in. “Social” media is less about connecting with friends and more about taking sides. We’re pressured to be radical left or staunch right, ultra-conservative or super-liberal, pro or con, for or against. Cultural issues, political issues, social issues—in this day and age, we’re not really interested in hearing your thoughts; we just want to know if you’re on our side.

Being peaceable, friends, has gone out of vogue. And that’s just what’s going on in inside the Church.

I’m being a little facetious here, but the fact is that from our political candidates to our policy positions, and for Christians, even our doctrinal differences, the spectrum is out and dichotomy is in. The loss of the middle would not be such a problem, I suppose, except that too often temperance, kindness, graciousness, and peaceableness go with it.

I know what you’re thinking: Wait, are you saying I always have to pursue peace with everyone? What about righteous anger? Should we not take a stand for what we believe?

Of course! There are some issues on which we should not compromise—for which there is no middle ground. When it comes to doctrine, those are clear, first-level issues like the Trinity, the authority of Scripture, and salvation by faith. Many social and political issues, along with secondary doctrines, are less clear and sometimes are simply matters of conscience. Can you still publicly choose a side and stand for your position? Sure. But here’s the caveat, from Ephesians 4:26: “Be angry and do not sin.”

IMHO (In My Haughty Opinion?)

Let me say here, I come at this issue with enough personal experience (of the insert-foot-in-mouth variety) to speak with confidence. In the past four years, I have at times been outspoken and ungracious when it comes to certain political figures and those within broader evangelicalism who support them. In fact, in some of my circles, I’ve been known for it.

“Be angry and do not sin” is a great filter through which I should funnel my words when engaging in controversy. But what if I also ran them through the filter of Romans 12:14–21?

Bless those who persecute you; bless and do not curse them. Rejoice with those who rejoice, weep with those who weep. Live in harmony with one another. Do not be haughty, but associate with the lowly. Never be wise in your own sight. Repay no one evil for evil, but give thought to do what is honorable in the sight of all. If possible, so far as it depends on you, live peaceably with all. Beloved, never avenge yourselves, but leave it to the wrath of God, for it is written, “Vengeance is mine, I will repay, says the Lord.” To the contrary, “if your enemy is hungry, feed him; if he is thirsty, give him something to drink; for by so doing you will heap burning coals on his head.” Do not be overcome by evil, but overcome evil with good.

When we run our words, thoughts, and behaviors through the filter of “do not sin” first and peaceableness next, we move from “do not” to “do unto,” from the restrictive to the prescriptive. We move from Christian-ish to Christlikeness.

In my life, I had to take an honest look at myself and ask, “Would my family, my church family, my Twitter followers, and my Facebook friends know me for my love for Christ or for my disdain for Political Figure X? Have I been more occupied with jumping on the latest Twitter bandwagon or with actually doing the work of the gospel in the life that I live offline?

I knew what the answer was in my life. What’s yours? As you consider your answer, think outside the box of politics. What about doctrinal or local church issues? Do you find yourself angered by or harboring feelings of bitterness toward people who don’t land on the same side of a particular issue as you do? What about Christian leaders and influencers? Has your “constructive criticism” of someone who falls short of your (or even what you believe to be biblical) standards for leadership turned into slander? Are there particular special interest or social issue-oriented groups that leave the bitter taste of hatred in your mouth? When you peruse social media, do you feel your blood begin to boil? Finally, has your anger over a non-essential issue begun to affect your relationships with friends or family?

Again, this is not to say that Christians shouldn’t engage in debate with believers and non-believers alike. But if and when we do, it must be done with love, charity, generosity, and kindness. We must not attempt to take from God that which is rightfully His—vengeance. We must not sacrifice our witness or our relationships on the altar of being “right.”

I recently asked a friend how her granddaughter is doing. I was floored by her response: “Well, we really don’t talk to her all that much. You know she’s at the University of ________. Do you know how liberal they are there? And now all she ever posts on Facebook is all this liberal stuff. We really don’t talk.”

Please, let’s not make the mistake of forsaking relationships of spiritual consequence because we disagree on issues, no matter how passionately we feel. For believers, it’s not worth breaking the sacred bond of spiritual family. With unbelievers, is winning the war worth souring a soul toward the gospel?

Are you willing to forsake winning for winsomeness?

Am I willing to replace griping with graciousness?

Dick and his wife are a dear older couple from my church family. Over the past few years, Dick and I have engaged in a debate or two or ten, most often about politics. Dick teases me often about wanting to “steal” his red hat. I tease him about wanting to “accidentally” run over it with my car. Sometimes things have gotten a little intense, but we’ve remained friends. Earlier this year, after a Sunday morning message about living peaceably with our brothers and sisters within the church, I told Dick (maybe a little jokingly) that I felt the message was speaking to me, and I wanted him to know that regardless of our differences in headwear choice, we would always be friends. Well, Dick said that he appreciated me so much, that he was going to let me wear his “special” red hat, which was signed by a family member of Mr. Red Hat himself. Dick thought that the best way for me to show that I meant what I said was for me to wear the hat. In front of other humans. And get a picture.

I can see how some people might have highly personal reasons not to do such a thing, but I didn’t feel that it would violate my conscience, so you know what? I put on that red hat, put my arm around my good friend Dick, and stood for the picture. You know why? Because the blood of Christ runs thicker than water. Because my brothers and sisters in Him mean more to me than my rage over the current political scene. Because whatever I am willing to sacrifice to make my voice heard, Lord, let it not be my testimony. Because as sinful and offensive as I am, Christ is pleased to stand beside me and call me “sister.”

The Path Toward Peaceableness

Are there areas in your life where you need to walk down the path of peace? Are there relationships that you’ve let fall to ruin because of positional disagreements? You’ve been angry, but have you sinned? The answer to these questions is probably “yes,” or you’re not being honest. And the path toward peace is clear: “Above all, keep loving one another earnestly, since love covers a multitude of sins” (1 Peter 4:8).

Does your neighbor with the political sign in his yard irritate you? Let love cover that.

Does Christian Celebrity X’s interpretation of complementarianism irk you? You don’t go to their church. Let love cover that.

Do your Facebook friends’ liberal/conservative/pro-life/pro-choice/second amendment/gun control/Republican/Democratic/social justice/immigration/insert-your-issue-here outspoken opinions make you want to scream? Well, go ahead. Find a place where you're alone and let it rip. And then let love cover that.

I wore a red hat (okay, and sunglasses) in a photo with my friend, Dick. The jury’s still out on what he’s going to wear in a photo with me. But this I guarantee: For the sake of the gospel, we will choose peace. And it will probably be a good idea if we don’t take ourselves too seriously along the way.