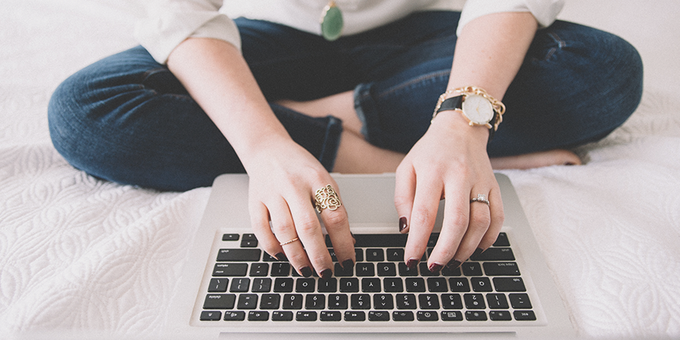 Pure for You, But Not for Me

Jeanne Harrison | Discernment,  Technology | Comments
Editor’s Note: This post was originally published in 2016, but it is still timeless. We’ve unearthed it and dusted it off for you to read today. Enjoy!

It was my one guilty pleasure. At least that’s what I told myself when the kids were in bed, the dishes were done, and I was cozying up with a blanket in front of the TV. I had discovered the show late one evening when my husband had a meeting, and I was too exhausted to do anything productive. It was “trending” on Netflix, so I gave it a try. Two episodes in, I was hooked. The plot was addictive, the characters were gorgeous, and their world was so exciting.

So unlike my world.

Plus, it was a fairly “clean” show. I was halfway through the first season, and the main characters had yet to even kiss. Actually, that was what made it exciting. (Are they ever going to get together?) It was so tragically romantic! Every night I grabbed the popcorn, flopped on the sofa, and told myself, “It’s way cleaner than the shows my friends watch. Way cleaner!”

There was just one problem. It bothered me.

“I think I need to stop watching this show,” I finally told a friend. “It’s putting me in a funk.” Then I quickly added (lest she judge me), “But it’s clean! It's not like there’s any sex or nudity in it.”

The Relativity of Purity

In 2012, Ted Turnau wrote a book called Popologetics, which examines pop culture from a Christian perspective. The book taught me one life-changing truth: when it comes to consuming media, believers must consider more than just content; we must also consider context.

Content is readily observable. In fact many helpful websites, such as Focus on the Family’s Plugged In, report questionable content in movies so Christians can make wise choices. They have ratings for sex, nudity, violence, profanity—all the junk we want to avoid.

But context is a lot trickier. Let me give you an example. Once, my husband and I stole away for the weekend to celebrate our anniversary. One night an old classic movie came on TV. I had seen it a dozen times, but Clint took one look and said, “I can’t watch that movie.” “Really?” I asked. I knew there were a few bad scenes, and I told him I would skip those, but he shook his head. “It’s the way she dresses,” he said. “I don’t want to watch that.” I quickly turned it off. I was so thankful for his honesty.

The next night, an action flick came on. “Oh, I love this movie!” we both said at once. So we watched it. From a content standpoint, it scored an A+. There was little violence, virtually no profanity, and zero sex or immodesty. Not even a kiss.

But the movie stirred so much inside of me. The hero was handsome, strong, and invincible. He always rescued the girl just in time. When he fell ill, she nursed him back to health. They were a team, on the run, fighting for their lives, and fiercely protective of one another.

That night as I laid in bed, I thought about the two different movies. The first one had some questionable content, but none of it bothered me. The heroine’s outfits didn’t make me stumble, and the hero of the movie was old and unappealing to me. In the past, I watched it because I liked the storyline and thought it was funny. I always skipped the inappropriate scenes, and I forgot the movie the moment it was over.

But the second movie lingered in my mind, and worse yet, in my heart. It made me ache for a life that wasn't real. For an adventure and a romance and a hero who couldn’t possibly exist. It led me to long for a fantasy.

Now let me be clear: I absolutely believe there is a standard at which sin is sin across the board. Nobody can righteously claim, “Pornography may not be pure for you, but it’s pure for me.” There is a point at which “content” becomes so contrary to God’s Word that believers ought to take a stand against it. But too often, it’s tempting to judge another believer for watching “that show” on TV, when “my show” may be just as poisonous to my soul, even though it lacks explicit content.

Perhaps then we would be wise to invest less energy into casting judgment and more energy into learning what is impure for us contextually. Philippians 4:8 says:

This verse begs the question: Are you watching any shows or reading any books, that make you think about things that are not commendable? What type of content tempts you to sin? Are you consuming some form of media that leaves you feeling dissatisfied with the life God has generously given you?

A while back I challenged a friend to quit watching a popular home renovation show because it stirred up such discontentment and materialism in her heart. The show is so “clean” a five-year-old could watch it, but it was causing fights between my friend and her husband. “It’s such a good show!” she told me. “I know,” I said. “But maybe it’s not a good show for you.”

The Reward of Obedience

I thought about my friend as I wrestled to give up my own “special show.” It was easy to spot compromise in another person’s life but so difficult to defeat it in my own life. Finally, one day I sank onto the sofa and told God, “What am I doing? I know myself. Shows like this are my Kryptonite!” Like the foolish people of Romans 1:18, I had “suppressed the truth” because I loved my sin. But that day I made the decision to actively love Jesus more. By His grace, I cut the show out of my life. Cold turkey!

Within days, the fog of discontentment began to clear. I found myself delighting in my family—studying my husband with fresh affection, thanking God over and over for my babies. Best of all, I sensed God's pleasure. “It’s so much better!” I whispered to the Lord.“Your way is so much better.”

The truth is, God’s way is rarely easier, but it’s always better. If you’re wrestling today with some form of media that’s sapping your soul, won’t you be bold and give it up? Do it by faith! Replace it with something spiritually and emotionally nourishing—a godly book, coffee with a friend, hanging out with your spouse, going to bed early! It may not feel better immediately, but the fog will clear. When it does, you’ll realize you traded a cheap idol for true joy.

Previous Post While You're Waiting, Seek His Face
Next Post Ask an Older Woman #17: Speaking Up When a Friend Goes Wrong

Is Social Media the Right Choice for You?