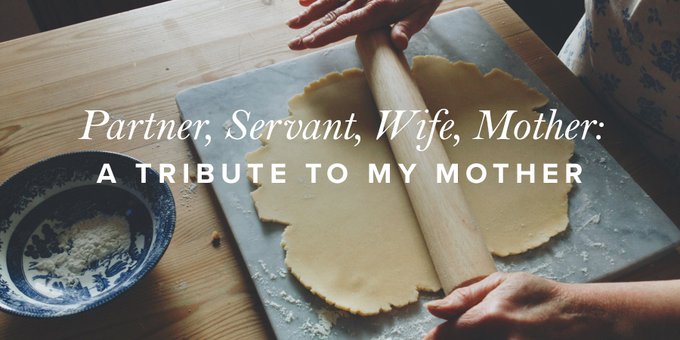 Partner, Servant, Wife, Mother: A Tribute to My Mother

As the firstborn child of Nancy Sossomon DeMoss, I have been blessed to bear the name and many of the characteristics of a remarkable woman. My mother’s example has shaped how I view my calling as a woman, how I relate to men, and, most importantly, how I relate to my heavenly Bridegroom, the Lord Jesus.

Growing up, I didn’t realize that my mother’s view of her role as a wife and mother was terribly out of sync with our times. Amid the climate of the 1960s, when women were encouraged to pursue independence, careers, and self-realization, my mother modeled a different kind of thinking—in which a woman’s heart and calling and the heart and calling of her husband were knit together as one for the purpose of serving and glorifying Christ.

When my mother, an extraordinarily gifted woman in her own right, married Art DeMoss at the age of nineteen, they planned to wait at least five years before having children so she could continue her training and career as a vocalist. However, the Lord had other plans. Within the first five years of their marriage, He gave them six children! Throughout those early years of marriage and childbearing, she welcomed each child God gave her—including a seventh child several years later. This was not without its challenges, but I have never heard my mother express anything other than gratitude for the blessing of having children and being a mother.

At the same time, my mother was fully-invested in the unique partnership she and my dad shared for twenty-two years as they built a successful business and a fruitful ministry together. In the early days, my dad dreamed of selling insurance through direct-mail marketing. Mother worked with him at the kitchen table to design the ads, write the letters, and process the responses. He also dreamed of inviting business and professional men and women to dinner to hear a gospel presentation—first a small handful, and ultimately thousands. She maintained the list of names and addresses, and sent out the invitations. The day of each event she supervised the meal preparation and service, stood by his side to greet the guests (he depended on her incredible gift of remembering names), and stayed up to put the house back together long after the guests left and the family went to bed.

Clearly, the task of planning and managing and corralling the hubbub of life and ministry in the DeMoss house was not for the fainthearted. And yet my mother oversaw all this and more with remarkable grace. She served her family and her Savior through her devotion to our home. And countless people found Jesus in that home, having been extended the gracious hospitality and gospel witness my parents offered.

Though she had given up many of her own plans, mother never thought of this as a sacrifice. She adored my dad and found delight in being his partner and encourager. And like the virtuous wife in Proverbs 31, my mother was far from downtrodden. To the contrary, my father deeply cherished and highly esteemed her; he cheered as every one of her God-given abilities was utilized in the service of Christ and His kingdom.

My mother considered it the highest honor to be Mrs. Arthur DeMoss. To this day, I can never remember her speaking negatively about him to us or anyone else. As such, she imparted to me a vision of a woman being a cheerleader for the men in her life. Her example caused me to look for ways, even while a single woman, to be an encourager and to accentuate the godly qualities in the lives of pastors, Christian leaders, and the men I served alongside in ministry. Now, as a married woman, it has given me a desire to love, bless, and encourage my husband in every way possible.

A Heart to Serve

Above all, her model has led me to reverence, honor, and joyously obey the Lord Jesus, the supreme love of my life. I long to be attentive to Him, to serve Him, to fulfill His wishes, to be by His side, and to let others know of my deep admiration for Him. These longings were first planted in my heart from the heart of my mother.

The Truth is: we are never more like Jesus than when we are serving. In the kingdom of God, true greatness is demonstrated by a person’s willingness to set aside his or her personal interests, put others first, and serve (Mark 9:33–35). As a wife, a mother, a servant, and a partner, my mother worked hard to create an atmosphere in our home that reflected God’s beauty, His order, and His merciful, welcoming heart. In so doing, she gave our hearts a taste for heaven and a picture of Jesus.