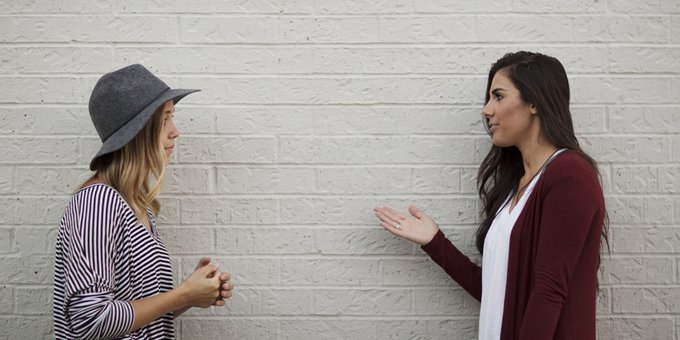 Is Our Communication Different? It Should Be.

Maybe I’m the only one, but I’ve noticed a fairly significant amount of mixed opinions milling around on the interwebs these days. (Actually, I know I’m not the only one who’s noticed this.) I’m not that old, but I certainly can’t remember a time where so much has been openly and hotly debated, and no matter what you do or don’t do—say or don’t say—there is someone who is going to disagree with you.

Now, I know that as Christians there are many who will disagree with us who aren’t believers. That doesn’t surprise me one bit. But what has been the most saddening to me in all of this is the amount of criticism and arguing happening amongst those who claim the name of Christ. I’m not talking about discussion; I’m talking all-out arguing, filled with anger, sarcasm, and open jabs. And it’s often about things that aren’t clearly laid out in Scripture as necessarily right or wrong. In fact, I can often see why both sides are thinking the way they are.

It’s gotten me doing lots of thinking and praying and seeking the Lord on how we should be handling these things as believers, both personally and with one another. I’m not going to be specific about the issues, because I’m quite certain you’ll be able to fill those in on your own. But I do want to encourage us to approach these topics how we are called to approach them according to the Word, not like the world.

There are certain principles in Scripture that are non-negotiable for the Christian: loving and obeying God, loving our neighbor, forgiving, being humble, being kind, being hospitable, caring for the poor, and so on. But the way (or method) that these are lived out might differ (sometimes significantly) from person to person.

For example, for the past five years, my husband and I have rented our basement to a number of Christian ladies in our community. It’s been a wonderful opportunity to practice life-on-life hospitality. But if I went around telling everyone that in order to practice hospitality it had to mean ladies living in the basement, that would be downright wrong. Why? Because God might be asking them to practice hospitality in a different way. They may not even have a basement in the first place! And if they did, God might be asking them to use that space for something else.

This might seem like an extreme example, but it’s not too far off from some of the things I’ve been seeing out there lately. Believers are, in essence, calling out other believers’ words, or lack thereof, as sin because it looks different than how they feel called to act, not because it’s clear in the Bible that it’s sin. We have to be so, so careful that we’re not quick to judge someone’s heart simply because what they’re doing looks different than how we would do it.

This doesn’t mean there is never a time or a place to discuss differences or to challenge the thinking of a brother or sister in Christ. There most certainly is, particularly when we feel that their words or actions are infringing on those non-negotiable principles we looked at earlier. But such a discussion must be marked by humility, love, kindness, and a willingness to hear the other out. It must be with a desire to bring greater love and unity, not us just wanting to be right.

What Are Christians to Be Marked By?

I’ll let the Bible speak for itself here:

I therefore, a prisoner for the Lord, urge you to walk in a manner worthy of the calling to which you have been called, with all humility and gentleness, with patience, bearing with one another in love, eager to maintain the unity of the Spirit in the bond of peace. (Eph. 4:1–3)

Do all things without grumbling or disputing, that you may be blameless and innocent, children of God without blemish in the midst of a crooked and twisted generation, among whom you shine as lights in the world. (Phil. 2:14–15)

Put on then, as God's chosen ones, holy and beloved, compassionate hearts, kindness, humility, meekness, and patience, bearing with one another and, if one has a complaint against another, forgiving each other; as the Lord has forgiven you, so you also must forgive. And above all these put on love, which binds everything together in perfect harmony. (Col. 3:12–14)

A hot-tempered man stirs up strife, but he who is slow to anger quiets contention. (Prov. 15:18)

It is an honor for a man to keep aloof from strife, but every fool will be quarreling. (Prov. 20:3)

The way we interact with one another and with the world should look markedly different than the world. Jesus said, “Love your enemies, do good to those who hate you, bless those who curse you, pray for those who abuse you” (Luke 6:27–28). This is a radical shift from the self-exalting, score-settling, insult-hurling culture we live in.

Our convictions should be strong. We should be bold to speak the truth. We should be willing to confront others when necessary and exhort our fellow believers to stand firm in the faith. But it should always, always be done in love and with patience. It is these traits that will usually make the difference between causing more division or achieving greater unity.

With patience a ruler may be persuaded, and a soft tongue will break a bone. (Prov. 25:15)

The wise of heart is called discerning, and sweetness of speech increases persuasiveness. (Prov. 16:21)

One last thing my husband and I have found to be helpful is waiting to discuss these difficult and often-divisive topics in person, if at all possible. There is so much that is left to personal interpretation when words are being read: tone of voice, attitude, facial expressions, etc. You might picture someone yelling, when in reality they are “speaking” calmly. In-person conversations are usually far more productive for that reason. This also provides the ability to dialogue in real time without a hundred other people chiming in. If face-to-face isn’t possible, the next best thing is a phone call.

Sometimes, it really is the right thing to engage with someone in writing on these hard topics, either privately or in the public sphere. But we just need to remember that generally speaking, it will be more difficult through writing to achieve the goal of bringing greater unity in these tricky and sensitive topics.

Again, there truly is a time and place to discuss these hard things. It’s just how and when. This requires wisdom from God, which He is always faithful to provide abundantly to us when we ask Him (James 1:5).

Friends, nothing is impossible with God. He can bring clarity and unity in the hardest of subjects. He can put love in our hearts for people we don’t agree with. He can give us humility and forgiveness when someone has wrongly accused us. And He can help us—His redeemed people—to be unified on the things that truly matter the most. Because of His indwelling Spirit, we can live in this world in a way that honors and glorifies God in everything we do and say. May He help us represent Him well to a world desperately in need of Him. Amen.

Previous Post Ask an Older Woman #19: 4 Mantras for Back to School
Next Post Pain Is Part of the Story He’s Writing