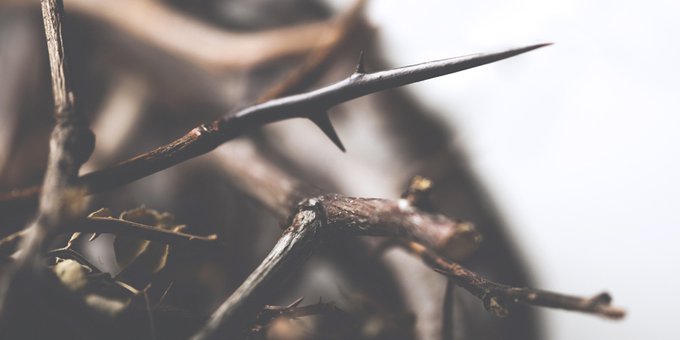 Offer Your Thorn to the Glory of God

The life of the apostle Paul—an unmarried man living two thousand years ago, Jewish convert to Christianity, well-known world traveler who survived beatings, shipwrecks, and imprisonment—can seem distant and foreign to our twenty-first century existence. But there is one aspect of Paul’s life that resonates down through the centuries to every believer: his famous “thorn in the flesh.” A thorn in the flesh is a near-constant irritant causing discomfort or pain in your life. It’s something you may be able to ignore briefly but is frequently on your mind, and is presumably not there by your own doing.

This thorn is such an unrelenting and problematic part of Paul’s life that he pleads repeatedly with God for relief, as he relates in his second letter to the Corinthians: “a thorn was given me in the flesh, a messenger of Satan to harass me, to keep me from becoming conceited. Three times I pleaded with the Lord about this, that it should leave me” (2 Cor. 12:7–8).

Almost without fail, the first thing a modern reader wants to know is what is Paul’s thorn? We begin to speculate, digging up clues from his other writings and revealing our particular fascination with another person’s secret problem. What could it be? Of course, we aren’t the first to have grappled with this question and many theories have been proposed: depression, malaria, epilepsy, vision problems, and persecution to name a few. We can speculate and debate all we’d like, but the fact is, we’ll never know. And there’s a reason for that.

Maybe Paul doesn’t reveal the identity of his thorn to the Corinthians because, frankly, it’s none of their business. It’s a problem that’s between Paul and God. But even more importantly, by not explaining the thorn more fully, Paul is ensuring that every believer both in first-century Corinth and in cities and times to come can identify with his plight. Every one of us has a “thorn in the flesh.” We all have something that is a frequent irritant, causing pain or discomfort in our lives that seems to never fully go away, no matter how often we ask God to remove it.

Our own thorn might be a person, a situation, a physical ailment, a persistent habit, or one of a multitude of other issues that can cause an unchanging, near-constant undercurrent of trouble in our lives. What if Paul had written instead, “I’ve asked God three times to improve my eyesight,” or “I’ve begged God to remove the persecutors from my life,” or “I’ve pleaded over and over with the Lord to heal me from epilepsy”? We would be sympathetic to his plight and think to ourselves, Oh, that must have been rough to have [specific thorn] bothering him all the time, but unless we could identify with that particular issue, we would simply move on to the next passage. By refusing to identify his thorn, Paul ensures that the wisdom and divine insight he’s about to share clearly applies to all of us.

But he [God] said to me, “My grace is sufficient for you, for my power is made perfect in weakness.” Therefore I will boast all the more gladly of my weaknesses, so that the power of Christ may rest upon me. For the sake of Christ, then, I am content with weaknesses, insults, hardships, persecutions, and calamities. For when I am weak, then I am strong. (2 Cor. 12:9–10)

God reveals to Paul why he has this thorn and why it’s going to remain in his side. First, Paul admits that it’s “to keep me from being conceited.” Humility is a critically important character trait in the eyes of God; in fact, humility and meekness are mentioned more than 100 times in the Bible. Paul likely has a propensity for pride and conceit (as do most of us, in different ways), and the thorn serves to remind him to be humble and not succumb to these sins.

Another reason that Paul is going to keep this thorn is because “[God’s] power is made perfect in weakness.” In his affliction, Paul is learning to rely on the grace of God, which is sufficient for him. In relying on God’s grace, he finds contentment and strength in his own weakness. It’s a paradox we see worked out numerous times in the Bible in many different ways. By God’s grace, we’ll see it in our own lives, as well.

Give Your Thorn to God

I’ve always been fascinated with this passage about Paul’s thorn, but it’s only recently that I’ve come to understand why. I’ve realized that the most important question isn’t the secret identity of the thorn or the mystery of why Paul has been afflicted. The real question is, what is my thorn? I have one and likely so do you. I won’t ask what yours is because, frankly, it’s none of my business; it’s between you and God. But it’s a weakness or affliction that you also have in common with Paul. If we ask this question of ourselves—what is my thorn?—suddenly this passage becomes not just about Paul and his struggles, but a practical way to identify our own thorn, face its reality in our lives, and admit that God is allowing it for a reason, which is for His glory. We also need to accept that it may never be taken away from us. The very thorn that brings us unhappiness and trouble is working for our sanctification, helping us to learn contentment, even contentment with joy.

Acknowledge your thorn and offer it up to the glory of God. For where you are weak, you are also strong.

Previous Post What I Want Out of These Challenging Days
Next Post The Church Together: Dead to Self, We Hide in Christ