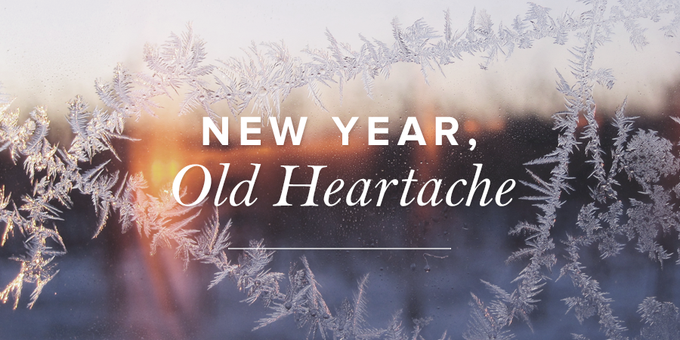 A long time ago, there lived a weak and weary people. They were used to defeat. Discord dampened their days, and fear of their enemies fueled their nights. King after terrible king led them closer to the brink of disaster. Then one day a sixteen-year-old boy assumed the throne. Against all odds he accomplished the impossible—he won battles, unified the people, and secured their nation’s borders. In a word, he became their “hope.” His name was King Uzziah, and sometime around 740 B.C., he did one more unthinkable thing.

Can you imagine how the people felt? In an instant their once bright future turned bleak. Have you ever had a similar experience? Has one moment changed everything for you? One hasty decision. One diagnosis. One irreparable mistake or irreplaceable loss. In that moment, it can feel like hope itself has died.

God gave me a small taste of a moment like this several months ago. One afternoon my healthy six-year-old daughter complained of a mild rash, and two days later her face and joints were swollen nearly beyond recognition. Her body was blood red, her eyes and mouth leaked pus, and unexplainable lesions covered her skin. It was the most terrifying nightmare of my life. For three days I kept vigil at her hospital bedside trying to process the impossible things I was hearing: “We’re calling in the infectious disease specialist.” “You need to see an ophthalmologist; there may be permanent damage to her eyes.” “She’s too dehydrated for her veins to bleed. We’ll have to stick an artery. Hold her; it’s very painful.”

I prayed relentlessly, often without words—just a deep, desperate cry to God from my spirit. But it kept getting worse. When her skin began to slough off of her body, we were rushed via ambulance to a burn unit two hours away. Our daughter was eventually diagnosed with Staphylococcal Scalded Skin Syndrome, a rare disease in which a staph infection causes skin to detach from the body, presenting itself like a second-degree burn.

In the weeks to come, life returned to normal . . . on the outside. We were discharged from the hospital, our daughter recovered and returned to school. But something had changed inside of me. I had nightmares every night. I felt anxious all the time. I cried for no reason during the day. At last I traced my distress back to a single moment. There was a moment, at my lowest point, when my heart whispered, “God, if you take her from me, You and I are through.”

It wasn’t a threat; it was a fear. I didn’t think my faith was strong enough to withstand watching my daughter die. So with sorrow I told God, “If she dies, I don’t think You and I are going to make it.” I simply couldn’t imagine a world where my child was gone, and I still felt hope, peace, faith, and joy.

Perhaps you’re facing this new year with a moment similar to mine tucked in your past. Perhaps your moment was far worse, setting the stage for a future as bleak as the one the Israelites faced after Uzziah’s death. Instead of ringing in the new year with anticipation or ambition, maybe you face it with old heartache and a sense of dread. If so, I have a verse for you.

Remember Isaiah 6? It’s the passage in which Isaiah has a vision of God seated on a throne, surrounded by fiery angels who cry, “Holy, holy, holy is the LORD of hosts; the whole earth is full of his glory!” (Isa. 6:3). Rewind back to verse one. Before describing his encounter with God, Isaiah provides a glimpse of context. He writes, “In the year that King Uzziah died I saw the Lord.”

I once heard a pastor say that Isaiah may as well have written, “In the year we lost all hope, I saw the Lord.” What powerful words! You could rewrite them a thousand different ways:

Just as one moment of tragedy can change everything in our lives, one glimpse of Christ can change everything about our future. If you’ve never read the story or you need a refresher, take a look at Isaiah 6:1–8. In light of Christ’s holiness, Isaiah saw himself for who he truly was—an unclean sinner, redeemed and chosen by God. With radical devotion, he answered God’s call to become a prophet by crying out, “Here I am! Send me” (v. 8). It’s believed he is the martyr Hebrews 11:37 commends for being sawn in two for his faith. That is radical life change. And it all started with an encounter with Christ, against a backdrop of hopelessness.

As we face a new year, perhaps it’s time to adopt a new perspective. The world tells us circumstances reign supreme. Are you rich or poor? Married or single? Successful or unemployed? Healthy or sick? What does your life look like this year? Whoever has the shiniest social media persona wins.

But God’s manner of blessing cannot be measured with Facebook likes or flattering filters. He doesn’t give as the world gives, with the Santa Clause theology that says, “Be good, and you’ll get what you want.” Rather, God gives out of the bottomless depths of His love, which cries, “I alone am good and the greatest gift is becoming more like Me.” How might God use the trials you face this year to make you more like Christ? How might you welcome an encounter with Him?

In the weeks following my daughter’s illness, I saw the Lord. The more I sat in His presence, the more I saw His heart with fresh clarity. And in the light of His great compassion, my fear finally dissolved. I used to think I would never deny my faith because I love Jesus too much. But now I know nothing will separate me from Christ not because my love is so strong, but because His love is unbreakable (Rom. 8:38–39).

Struggling for Satisfaction in Suffering