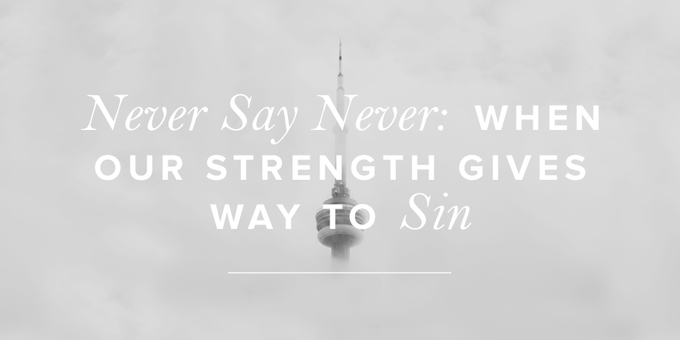 Never Say Never: When Our Strength Gives Way to Sin

A prominent megachurch pastor is fired due to long-term self-exalting and manipulative behavior.

A middle school teacher is accused of molesting a child she is hired to protect.

The rest of us? We look on. We shake our heads in disgust, spit out our enraged social media rants. And whether out loud or in our hearts, we presume these three little words . . .

And in that moment, we are sunk, because we already have.

Why? Why is it so easy for me to look out from the ivory tower of my (self-perceived) impeccable morality and see so clearly the gaping pits into which Activist A, Pastor B, and Teacher C have stumbled? I am prone to say, "How could they be so careless, so stupid? Wasn't it obvious that these decisions were wrong? How could they let themselves get here in the first place?" I mean, is it really that hard?

My tower is pretty high. So high, in fact, that I'm oblivious to my immediate surroundings. My whitewashed fortress, this strong sense of righteousness that gets me through the day? It's built in a pit of my own, and I'm completely blind to it.

Scripture tells us that "The heart is deceitful above all things, and desperately sick; who can understand it?" (Jer. 17:9). When I attempt to identify my own areas of vulnerability, my pits, I'm pretty shortsighted because I gravitate toward the areas in which I clearly see my weakness:

My weaknesses stink, and I recognize them, but rarely do I look to the area where, as a believer, I am most likely to stumble. I fail to see the pit of my strength.

A few weeks ago, I heard a message that drove this idea home to me like never before. Perhaps you've heard this Chinese proverb the pastor quoted: "An unguarded strength is a double weakness." He then went on to present a lineup of biblical examples—people whose perceived area of strength was exactly the area in which they fell. Think about it! Here are some of the examples given:

The case from Scripture is pretty clear. You can re-read the first paragraph of this post or cruise through your newsfeed for examples from modern culture. How about a historical example? What is the defining characteristic of the United States? Freedom. What do terrorist groups hate so much that they long to bring us to our knees? Freedom. Put it all together, and the old Chinese adage rings true: "An unguarded strength is a double weakness."

If these things are true, then we have to ask—as women, as wives, as mothers, as teachers, as mentors—is it ever wise to say, "I would never . . ."?

Chances are good that the majority of people in those early examples of falling to temptation would have put themselves in the "Never" category. Some actually did!

When I read my Bible, just one page before Peter's first, second, and third denial of Christ, he's confidently proclaiming before Christ Himself, "Lord, I am ready to go with you both to prison and to death" (Luke 22:33).

And within a day he's afraid to speak the name of Jesus before a little girl (v. 56)? If Peter, "the rock," is vulnerable to falling on the sword of his strength, then guess what? I am, too. And so are you.

So instead of looking for our weaknesses and then searching for the best self-help Christian book or blog post to overcome them, a different tactic might be needed in the battle against sin and self. For instance, as women, what are some of our more natural strengths?

Yet when perusing that list, it doesn't take long to see how any one of those strengths can become the pit of our destruction:

These are characteristics that are God-given and wonderful, but we are also playing with fire. As quickly as we become enveloped in its warmth, it can become all-consuming.

On an individual level, admittedly, it can be hard to pinpoint our own greatest asset, so I asked my husband the other night, "What do you see as my biggest area of strength?" After a long pause (a little too long for my comfort, frankly!), he said, "Probably your ability to communicate or your desire to do what's right." Both good things, correct? But both areas in which I need to exercise great caution.

I need to acknowledge that my words can slice and dice as aptly as they can build and encourage. I need to make sure that my desire to do what is "right" in my eyes is not done at the expense of my husband's leadership. These are tricky issues and fine lines, but ones which we cannot ignore.

Beware of the Undercurrent

In My Utmost for His Highest, Oswald Chambers summed it up this way:

We are apt to say, "It is not at all likely that having been through the greatest crisis of my life I would now turn back to the things of the world." Do not try to predict where the temptation will come; it is the least likely thing that is the real danger. It is in the aftermath of a great spiritual event that the least likely things begin to have an effect. They may not be forceful and dominant, but they are there. And if you are not careful to be forewarned, they will trip you.

You have remained true to God under great and intense trials—now beware of the undercurrent. Do not be abnormally examining your inner self, looking forward with dread, but stay alert; keep your memory sharp before God. Unguarded strength is actually a double weakness, because that is where the least likely temptations will be effective in sapping strength. The Bible characters stumbled over their strong points, never their weak ones.

Never say never, dear sister in Christ. Beware, but do not be afraid. Be guarded; stay alert.

How about you? What do you think is your greatest strength, and how might that be used to your detriment? What would others say about you? Ask someone today, and make it a matter of prayer going forward.

Previous Post Articles, Resources, and More (08/11/16)
Next Post Do More Better: A Productivity Tool That Could Revolutionize Your Life

The Self-Sufficiency of Self-Improvement

The Subtlety of Self-Justification