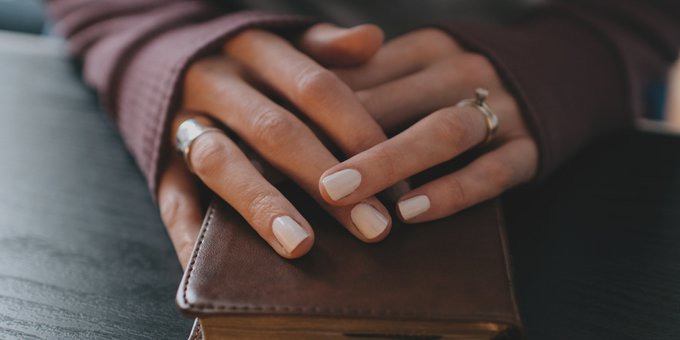 Moving from Milk to Solid Food

When my oldest was a baby, I was excited when he grew old enough to try real food for the first time. I was certain he’d love it. But as I soon learned, it’s not always a smooth transition from milk to solid food. Little ones have to adjust to the different textures in their mouth and learn to mash up food with their gums. To this day, one of my kids will not eat certain foods simply because of how they feel in his mouth.

The Bible talks about milk and solid food in reference to our spiritual growth. When we first come to faith in Christ, we begin with milk; we begin with the basics of the gospel. As we grow and mature, we start feasting on solid food. We dig deeper into Scripture. We learn more about the doctrines of God. Throughout our life of faith, we continue to eat rich spiritual food.

Sometimes though, we may find ourselves just not that interested in solid food. We are content to subsist on spiritual milk. Paul addressed this problem in his letter to the Corinthian church. This church was plagued with numerous problems, among them divisions in the church, co-mingling with pagan religious practices, and significant issues with sexual immorality. Their behavior was inconsistent with the gospel he had preached to them.

But I, brothers, could not address you as spiritual people, but as people of the flesh, as infants in Christ. I fed you with milk, not solid food, for you were not ready for it. And even now you are not yet ready, for you are still of the flesh. For while there is jealousy and strife among you, are you not of the flesh and behaving only in a human way? For when one says, “I follow Paul,” and another, “I follow Apollos,” are you not being merely human? (1 Cor. 3:1–4)

How did Paul know they were not ready? Because of their conflicts with each other and the popularity contest they put on between Paul and Apollos. But there was a deeper reason they could not digest solid food: their worldliness. They were still of the flesh. This doesn’t mean they were not believers; rather, their flesh had a greater hold on them than the Spirit. They hadn’t “put off” their old ways of doing things and “put on” Christ as Paul instructed in Colossians 3. They weren’t living a life of holiness, as those who were set apart by God.

Moving on to Solid Food

But like babies transitioning to solid food, we have to develop a taste for it. They say it takes at least ten times of trying a new food before you like it. When it comes to feasting on God’s Word, we develop the taste and desire for it through practice. The more we read and study, the more God’s Word transforms us, and the more we realize how much we need it. As the author to the Hebrews exhorted:

Though by this time you ought to be teachers, you need someone to teach you again the basic principles of the oracles of God. You need milk, not solid food, for everyone who lives on milk is unskilled in the word of righteousness, since he is a child. But solid food is for the mature, for those who have their powers of discernment trained by constant practice to distinguish good from evil (5:12–14).

We also need to lose our taste for milk. I remember teaching my little ones to hold their own cups and to use a spoon on their own. They were used to being fed by someone else and had to develop the ability to drink and eat for themselves. Likewise, when we are used to drinking spiritual milk, we are used to being fed by others. We read pre-digested devotionals. We ask others to tell us what a passage means. Growth in maturity means that we set those aside and engage the Bible for ourselves.

But above all, to grow in spiritual maturity, we must shed worldliness. Because we are united to Christ by faith in his life, death, and resurrection, we are new creations. We are not who we once were. So why would we want to live like we are? Let us put off our old way of life—the thoughts, beliefs, and behaviors of this world— and “put on the new self, which is being renewed in knowledge after the image of its creator” (Col. 3:10). Let us live like the holy and set apart people that we are.

While the Bible calls us to come to Christ like little children, dependent upon his grace, we are not to remain as children. We are to grow and mature in the faith, moving from milk to solid food. May we feast on God’s Word, savor its taste, and hunger for it all our days.