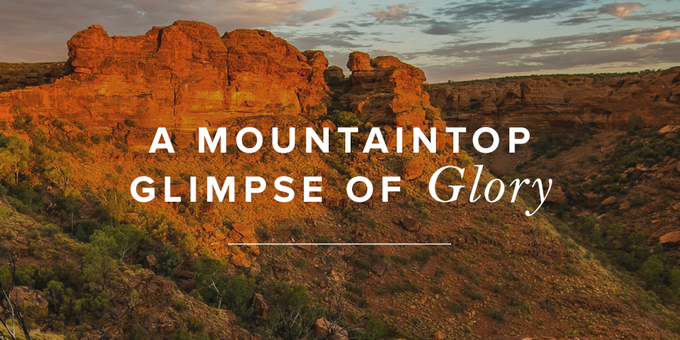 I kept leaning forward in my seat, squinting. We were supposedly getting close to the Grand Canyon, but I hadn’t seen anything even remotely spectacular yet.

Nor did I for quite some time. Not through the mundane flat plain, dotted with cactuses. Not at the gateway of the national park. Not in the vast parking lot, the visitor center, or even on the bus that leads down to the trailheads. All the way up to the actual overlook, I never caught even the slightest glimpse.

But I’ll never forget stepping off that bus and seeing the Grand Canyon for the first time. The vast beauty and explosion of three-dimensional color brought tears to my eyes and caused my heart to swell with deep emotion. It was one of the most stirring moments of worship I’ve ever experienced.

There is nothing like a sweeping, majestic overlook to provide perspective and stir up worship, don’t you agree? Perhaps this is why Jesus created the mountains in the first place and why He took the disciples to one to experience His transfiguration.

The excursion began as a normal hike, but at the top it wasn’t the scenic view that took the disciples’ breath away; it was their view of Jesus conversing with two unexpected guests.

At the bottom of the mountain, they had been a party of four—Jesus, Peter, James, and John. But now at the top, they were joined by two historical greats—Moses and Elijah.

Imagine the disciples’ shock. It would be like hiking Pike’s Peak then seeing your friend talking to George Washington and Abraham Lincoln at the top. You’d be stunned, first to see these history makers walking about but also to see your friend leaning in for deep conversation.

Moses and Elijah were talking with Jesus about His departure. Imagine their new clarity as they considered their own roles in the overarching story of God—now culminating in the upcoming death and resurrection of Jesus. Can you picture the realization dawning on their faces?

But as you picture Jesus’ face, be sure to note that “the appearance of his face was altered, and his clothing became dazzling white” (Luke 9:29). It was a color no bleach has ever produced—perhaps the color of a streak of lightning (Mark 9:3).

Jesus was in His glorified form. The veil that masked His deity was gone. The disciples, seeing Him in a whole new light (pun intended), were understandably terrified (v. 6). But Peter was also excited.

Impetuously, he rushed forward and awkwardly interrupted Jesus saying, “Rabbi, it is good that we are here. Let us make three tents, one for you and one for Moses and one for Elijah” (v. 5).

Notice Peter’s opening comment: “It’s good that we are here.” By “we,” he means the three disciples. He says, “Let us [Peter, James, and John] make three tents for you [Jesus, Moses, and Elijah].”

Peter wants to contribute and take part. He wants to make himself useful, so he’s jumping in to make suggestions. He could set up tents! That way they could all stay a while. Good thing he and his fisherman friends have the muscles and ambition. “It is good we are here!”

I have a Peter-type personality, so I get this. Sometimes I go tripping over my own feet, trying to make myself useful to God. I always want to jump in and use my gifts. I want to make things better. I want to be in that inner circle, doing big things for God, so sometimes I push in.

Can you relate? Even if you’re less impetuous, are there ways you rush in to make yourself useful? Perhaps you’re good at serving, organizing, or leading. Maybe you’re a good cook or a great hostess. Do you ever throw yourself into God’s work, looking back over your shoulder saying, Good thing I was here. Right, God? Like Peter, we’re a bit off when we respond this way.

When I only focus on what I can do to help God but never stop to be still and worship, it’s like standing at a Grand Canyon overlook and worrying about a stain on my shirt. When I obsess over what I can do to help Jesus rather than stopping to listen to Him, it’s like ignoring a Grand Canyon view and busying myself with the people beside me who need their water bottles refilled. That’s nice, but it’s also such a shame to miss the view!

To be at the Grand Canyon trying to make myself useful is all wrong. It puts the emphasis on me when my emphasis should be on the view!

When faced with the grandeur of God’s glory, the most right and appropriate response is to drink in the beauty of His majesty. The best thing to do is worship. This is true for worshipers today, and it was true for the disciples on the mountain with Jesus.

God responded immediately to Peter’s blurted-out tent-building idea. He draped the cloud of His presence over the mountain, clouding the view and putting a halt to Peter’s plans. God’s voice thundered through the cloud, bringing piercing clarity:

Notice the contrast. Peter had interrupted, wanting to talk with Jesus and share his idea. He wanted to get to work and contribute. But God told Peter to do just the opposite. Stop, and listen to His beloved Son.

This was a pivotal moment. Jesus hadn’t brought Peter there to do something; He wanted him to see something. Jesus was unveiling himself as their King. Their God.

A Glimpse of Glory

The cloud lifted, and everything went back to normal. Party of four. No patriarchal heroes. No glowing white clothes. Just Jesus and His three friends.

So did anything change? Did the disciples see everything in a whole new light? Apparently not, because later in the same chapter they’re arguing about who is the greatest among them (vv. 33–34). Perhaps the three hikers even used their mountaintop experience to tout their superiority.

But before we roll our eyes and wag our heads, perhaps we should check the mirror. We might not share them publicly, but sometimes we also make checklists of the ways God has singled us out or how we’ve contributed to His kingdom work.

Rather than worshiping Jesus as we sing, teach, serve, or lead, we use these experiences as proof that we are superior disciples. We say, “It’s good that I’m here. Right, God?”

How inappropriate. We’re once again putting the emphasis on us when it should stay on Jesus.

Right now, we’re on a road that leads straight to heaven. We lean forward squinting, hoping to catch a glimpse. On the day we step out into glory, our faith will become sight and worship will swell in our hearts like never before.

But for now, we must be satisfied with glimpses of God’s glory. Little mountaintop experiences that offer perspective. When we get too caught up in our contributions, we need God to drape His presence over us like a cloud and put a halt to our busywork. We need to heed His clarifying voice, saying, “This is my beloved Son; listen to Him.”

When was your heart last stirred to worship God? Has God given you mountaintop perspective lately? Or are you more caught up in how you can contribute to God’s work? Perhaps, like Peter, God isn’t inviting you to do something spectacular but rather to see and listen to and experience His Son. How will you make time to listen to Jesus today?

When You Want to Worship God Well