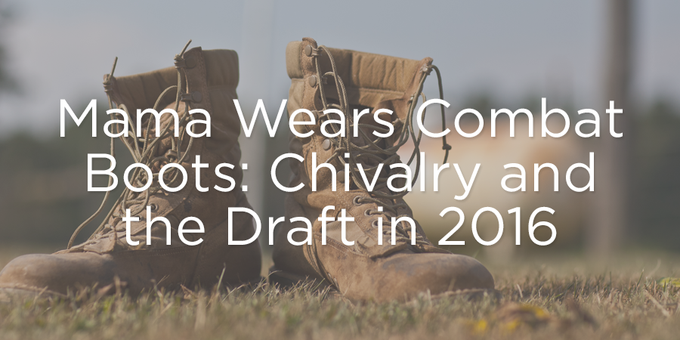 Every few years it seems, a national conversation regarding women in military combat arises. About four years ago, I was discussing this with a friend who said, "The only thing restraining us from sending women to the front lines, at this point, is selective service. America is still not ready to draft our little girls into battle. And the moment you allow women in combat, the draft issue will have to be dealt with."

Fast forward to February 3, 2013. While we Americans prepped our buffalo wings and sparred about game scores and commercials, President Obama sat down for his traditional pre-Super Bowl interview and expressed his unhesitant support for new Pentagon policy opening all military positions, combat included, to women. This served as an appetizer to the main course, when, despite opposition from the Chairman of the Joint Chiefs of Staff, Attorney General Ash Carter announced on December 3, 2015 that, within thirty days, all combat positions would be open to women. "There will be no exceptions," Carter said.1

Then dessert. True to my friend's words, in just a little over a month's time upper echelon military officials recommended to the Senate that since all positions are open to everyone, all eligible men and women should be required to register for selective service.

The icing on the cake? At the first GOP debate after the recommendation, three candidates were asked what they thought and each agreed with the recommendation heartily. The rest of the candidates remained quiet—a strange silence in an election cycle where debates have been marred with non-stop interruption. But who wants to touch this issue? Who wants to serve as counsel for biblical manhood and womanhood in the case of "Bible vs. Prevailing Public Opinion"?

I do. I hope that you do. But as we prepare our case, we have to ask how we got to this point. How did we go, in the Western world, from "Women and Children First" to "Equal Right to Die in Mandated Military Service"? Should we ring the death knell of chivalry as we know it?

Women and children first . . . We've all heard the phrase, but is it for real? Is this how men have historically responded in times of crisis? Well, yes and no.

Recently, two economists from Sweden studied eighteen maritime disasters in an attempt to understand how women and children fared compared to their male counterparts. The study found that the behavior exhibited in the legendary cases of the Titanic and, earlier, the Birkenhead (after which the "women and children first" protocol is named), was, basically, an anomaly.

By most accounts, all of the women and children on the Birkenhead survived the disaster, while more than 400 men perished. In the case of the Titanic, 75 percent of women aboard survived as well as 50 percent of children, while only 17 percent of men endured the disaster. However, the Swedish researchers garnered different results for the other sixteen disasters they studied. Men clearly took the cake, enjoying a 37 percent survival rate overall, compared to 27 percent of women and 15 percent of children. This led the researchers to believe that on most vessels a more accurate descriptor of behavior was "every man for himself."2

Kind of disturbing, isn't it? Why? Because, data or no data, as a society we still innately feel that it is the job of men to protect women and children. Remember the scene in the Titanic movie when Bruce Ismay, managing director of the White Star Line, takes one of the last remaining lifeboat seats? He immediately becomes just about the most hated man in the film, and according to reports, the real Ismay lived to regret that decision for the rest of his life. He could not come to terms with the fact that he, by choice, had survived when women and children went down with the ship.

The Swedish researchers concluded that the difference between the Birkenhead, Titanic, and the other disasters came down, not to the intrinsic bravery of the men on board, but to the leadership of those particular ships. Both ships had captains who insisted that the lives of women and children came before those of men. But what about the other sixteen disasters, where it was "every man for himself"? Maybe chivalry is dead after all!

But modern history tells us a different story, doesn't it? It tells us of the heroes of the Aurora, Colorado movie theater shooting in which at least a quarter of the victims who died were men bodily protecting their wives or girlfriends. It tells us of the Paris terrorist attacks, where men reportedly rushed to the venue's balcony to plead for the lives of their feminine companions. It tells us of Shannon Johnson, who, as bullets showered his holiday party during the San Bernardino terror attack, was killed while shielding his coworker, Denise Peraza, uttering his last words, "I got you." Denise Peraza survived because there was something within one man that told him to put "women and children first."

And that "something," we can be sure, was put there by God. Going all the way back to creation, God's distinction between men and women was both purposeful and productive. In Genesis 1:27 we read, "So God created man in his own image, in the image of God he created him; male and female he created them." The distinction between men and women is punctuated by these words in verse 31: "And God saw everything that he had made, and behold, it was very good." God affirms His creation—the whole thing—with these four remarkable words: It was very good.

Not only was God's distinction between male and female purposeful and productive, but it was also prescriptive and protective. As Christ was sent to the Church as her remedy for sin—sickness and her protection from spiritual harm, so the husband is called to die to himself for the sake of his bride. We read in Ephesians 5:28–30, "He who loves his wife loves himself. For no one ever hated his own flesh, but nourishes and cherishes it, just as Christ does the church, because we are members of his body."

Beyond its application within the confines of marriage, the case for men as the natural, God-ordained protectors and defenders of women is affirmed elsewhere in Scripture:

A Biblical Response: Christians Must Take the Lead

I mentioned earlier that the difference in outcomes during maritime disaster depended on the leadership of the vessel. It's time for Christians who affirm the purposeful and complementary design of the sexes to take the helm of our ship. Some great responses have already been crafted, like this one, in which Andrew T. Walker draws this line in the sand: "America may fall victim to such erroneous ideologies that intentionally [put] women in harm's way, but it will not count my daughters as casualties for its cause—ever."

Writing for the Center for Biblical Manhood and Womanhood, Grant Castleberry stakes a powerful position as well:

The church constituted in the name of a self-sacrificial savior calls men to lay down their lives for women and children. We men gladly put ourselves on the line because we are following our head, the Lord Jesus Christ, who sacrificially laid down his life for his people (Eph. 5:25–26). Without hesitation, we are ready to protect women and children at the expense of our own lives. This is a weighty responsibility, but even if no one else joins us in owning it, we will bear it gladly.

These are fantastic responses, and ones which, prayerfully, will be echoed by our churches' men in the months to come. But as a mother and as an affirmer of biblical womanhood, may I add one more thing?

We refuse to sacrifice our children's mothers on the altar of ideology.

Without a doubt, a common argument for women in the draft will be this: Even if women are required to register for selective service, it doesn't mean that they will be required to perform combat roles. Here are two things to consider as we respond to this challenge:

The battlefields of today know no boundaries. There are no rules in the war on terror. Every woman in the military is a woman at stake. It would be gross negligence to believe otherwise.

As women and as Christians, we should stand behind our God-fearing leaders, affirming their nature as our protectors and thanking them for their unwillingness to sacrifice us to the cries of our culture. And we must be careful what we demand, ladies. In the march for equality, we are likely to get more than we bargained for.

How do you feel about the possibility of the draft expanding to include women? How might mandatory inscription for women impact our culture? Do you see a window of opportunity to spread the message of biblical womanhood by becoming a part of the conversation? Is chivalry dead in the United States? Chime in and let us know what you think.