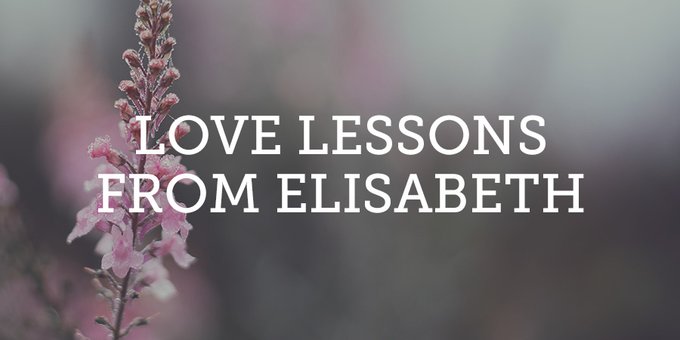 My life changed radically as a sophomore in college. It was 1997, I was a brand-new Christian, and I was dealing with a broken heart after my Christian boyfriend of two years broke up with me at the start of the school year. Initially we tried being "just friends," which sent me on an emotional roller coaster every time I received a call or email from him. Maybe he wanted to get back together? He must really be missing me if he is reaching out to me again.

All of my preconceived notions of being in a relationship were thrown out the window.

But back in our hometown over Thanksgiving break, he said the words that stabbed me like a knife in the back: "You're like a sister in Christ to me." What?! After two years of dating and then continuing to communicate . . . my heart was smashed into a million pieces again. I knew things needed to change. Then I discovered a little pink book . . .

Quest for Love by Elisabeth Elliot is probably not one of her more well-known writings. Somehow it ended up in my hands, and my entire perspective on dating, marriage, and being "just friends" was changed. I devoured that book, every page of it. This was all brand-new to me—male initiative, courtship, marriage being a gift and not a right. All of my preconceived notions of being in a relationship were thrown out the window. I saw the wisdom of this godly woman, and my paradigm shift began.

Before reading this book, I had no trouble being the one to make the first call, showing my interest in a "subtle" way. Being flirtatious just seemed like par for the course. And what was wrong with dating people just for the fun of it? But now that my heart had been broken and I realized how incredibly difficult it was to be "just friends" with someone you had a long-term romantic relationship with, I realized I had a lot to learn. Elisabeth Elliot became a mentor to me through the pages of her book. Here are a few lessons I learned along the way.

More often than not, one person has other motives involved. In my own story, I thought I could handle being "just friends" after we broke up. But in reality, I was hoping that staying in touch would eventually bring us back together. Instead, it only brought pain and an emotional roller coaster. It wasn't until I cut off all communication with him that I felt free to fully embrace God's plan for me and true healing began.

Everything in our culture pushes women to pursue. No one would bat an eye at a woman making the first move, calling the guy she is interested in, suggesting the first date, or even making the marriage proposal. But from the very start of creation, God made plain that man is to be the initiator, the leader. God created Adam first. Eve was made for Adam. She was named by him. He is the initiator, she the responder. How contrary this is to popular opinion! But when I firmly decided not to pursue this man I was so drawn to, I was released to trust that God was in control. If the young man came back into my life, he would need to do the pursuing. And then it would become much plainer where the relationship was headed.

I often say the two years I was single in college were the best of times and the worst of times. My heart longed to be with the young man who had broken my heart, but God had a plan in the waiting. I soaked up the Scriptures like never before, searching for comfort and hope. I read Elisabeth Elliot and determined to do things completely differently should another romantic opportunity arise. I was forced to trust the promise of Psalm 84:11, that God would withhold nothing good from me. Those two years were a time of greenhouse growth in my spiritual life. In waiting for God's best for me, I was learning to trust Him like never before.

This was perhaps the lesson that stood out to me the most. I had always assumed I would get married. But after reading this chapter in Quest for Love, my perspective totally changed. Elisabeth's blunt words cut to the chase: "Singleness ought not to be viewed as a problem, nor marriage as a right. God in His wisdom and love grants either as a gift" (p. 198).

Singleness as a gift? Really? But it was those words that made me refuse to sit and pine over my lost relationship. My portion ( Ps. 16:5) for that time in life was singleness. And I was not going to waste it! Not expecting that I would definitely get married or fearing that I would miss out on a courtship opportunity gave me the boldness to study overseas the following year in Spain. As I shopped for a friend's wedding and discovered a lovely set of dishes on sale, I decided to purchase them for my apartment. Why wait to get nice things until your own wedding? Life starts now! God's gift to me at that time was singleness, and Elisabeth Elliot encouraged me to embrace it to the fullest.

Ironically, at the start of my senior year of college, the young man who had broken my heart came back into my life. But this time, things would be different. As we shared what God had taught us and how He had changed us in the course of two years, this young man began to pursue me. I shared with him how much my perspective had changed on dating/courtship, largely in part because of Elisabeth's book. I asked him what his intentions were for our relationship, knowing that "just friends" would not be a possibility. I also asked this strapping football player if he would be willing to read Quest for Love as we began to renew our relationship so he would understand the perspective I was coming from.

In waiting for God's best for me, I was learning to trust Him like never before.

That young man is now my husband, and we laugh as we recall how he had to go into the Wheaton College library and ask for the pink copy of Quest for Love that was kept behind the counter in the "special collections" area—a place where books couldn't be checked out but only read in the library. Not very many football players could be found reading Elisabeth Elliot in the corner of the library on Friday nights. And thanks to Elisabeth's wisdom, the course of our relationship followed a very different path the second time around. We were married just months after graduation.

Thank you, Elisabeth, for setting a godly example of biblical femininity and complementarianism that has impacted thousands. Your legacy lives on through the lives you touched and the pages of your books that will be handed down for generations to come. My tattered, pink copy is ready to fall into the hands of my daughters in just a couple of short years.

Previous Post Jesus Speaks Out for Marriage
Next Post Mom vs. Mom: The War I Didn't See Coming