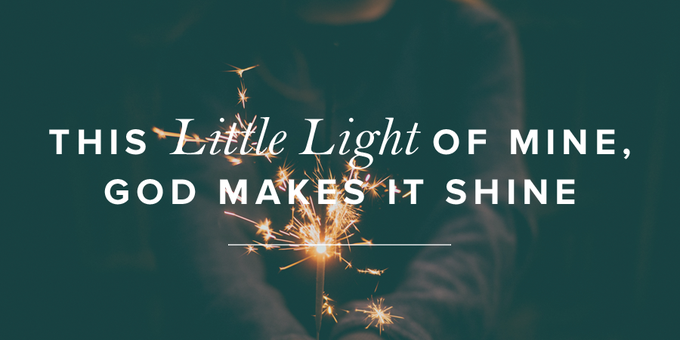 This Little Light of Mine, God Makes It Shine

Our first house was on a corner lot, in a neighborhood that had no stop signs. There was an unwritten rule that drivers on east/west streets were to yield to drivers on north/south streets. For the most part, the system worked. The only time it failed us was when someone unacquainted with our neighborhood happened to drive on an east/west road.

Believe it or not, this occasionally happened.

One afternoon, I heard a crash and ran to my front window. Two cars had collided and were now crumpled together in my front yard. I could tell which driver was "new." She was the one who emerged looking stunned rather than angry.

This was before cell phones, so I called to her, asking if she wanted to use our phone. Gratefully, she headed my way. After calling the police, she sat in our living room, looking dazed. She said, "I could have died just now. My sister died recently, and now I could have died."

I nodded sympathetically, and asked, "Do you know what would happen to you if you died?"

Her expression shifted to bewilderment. She said, "Well . . . no. Does anybody?"

I said yes, that I did know, based on what God says in the Bible. She was intrigued by my confidence, so I went on. I explained about the invisible world beyond ours that will one day be our reality. I told her in that life we will see God and be held accountable for how we responded to His Son, Jesus. Those who embrace Jesus as Lord will enter into eternal happiness. And those who ignore or reject Jesus will be cast out to outer darkness (Matt. 8:12).

My new friend listened intently, then agreed to let me pray for her. I sent her home with some verses to read and consider. I rejoiced that day, knowing that God strategically brought a woman with questions about Him to my very own living room.

A Light on a Stand

"No one after lighting a lamp covers it with a jar or puts it under a bed, but puts it on a stand, so that those who enter may see the light" (Luke 8:16).

The lit lamp is a metaphor for coming to understand truth. All of us enter this world with darkened hearts and minds. As Christians, we are the ones who have a lamp of understanding lit in our hearts and minds. We see things that the rest of the world is blind to. Praise God, our eyes are opened to the truth!

This verse about the light on a stand comes just after the parable of the sower in Luke 8. The good soil, Jesus explains, represents the people who receive truth and hold fast to it. The truth germinates in their hearts over time, and then the one seed grows and multiplies itself (Luke 8:7, 15). So seed spreads. And light spreads.

But who is responsible for the spreading? Well, we are. As little children, we sing, "This little light of mine . . . I'm gonna let it shine!" We should willingly and cheerfully cultivate lives that shine out into the darkness around us. Yet the true strategist behind all of our shining is God, for He strategically puts us in the very place that we shine out from.

A lamp placed under a jar gets snuffed out, the verse says. A lamp placed under a bed (hopefully a tall bed!) doesn't help anyone see because no one is down there. But a lamp on a stand allows others who enter the room to see! So God strategically places His people on stands for the sake of spreading light.

Sometimes, the stand God places me on is a comfortable, happy place. The day the woman came in to use my phone, I believe God strategically positioned me to share truth with her. But this interchange cost me very little. The interruption was no more than thirty minutes, and I didn't even have to leave the comfort of my own home.

Other times, however, God places His people on stands or "platforms" that are far less cozy. For instance . . .

None of these platforms are comfy-cozy. Nobody wakes up one day, longing to share the ugly, dark crevices of their experiences with sin. Most of us prefer to store life's darkest moments up in the attic, not pull them out in the middle of the room. Sharing with strangers is very hard; sharing with close friends and family can be even harder! Those we hold dearest can hurt us most. And so it is out of fear, shame, discomfort, or feelings of inadequacy that some Christians choose to walk off the very platform God has chosen for them.

Look at Your Stand

Friends, may this not be so of us! Take a moment, and glance down at your stand. What platform has God given you to speak from?

Consider this. God has strategically positioned you on this very stand—with your particular past, experiences, and position—because He wants you to shine for Him from it.

Now, look up. Who has entered your "room"? Who can you influence?

This very day, God may bring someone to you who is living in darkness. Maybe your paths will cross for twenty minutes, maybe for twenty years. The woman driving through my neighborhood that day had no intention of coming to my house, but God brought her anyway. She entered my "room," and I had the great delight and privilege of shining light into her darkness. God has strategically placed you on a "stand." He brings people into your room and with a smile says, "Now, shine!"

Who will you spread light to today?

Look around you. Who is stumbling in the darkness? Who has a look of bewilderment? Who has crashed right outside your door? Won't you lay aside busyness and shine the light of Jesus into this person's darkness? God has placed you on your particular stand for one purpose: He wants to use you to spread the light!