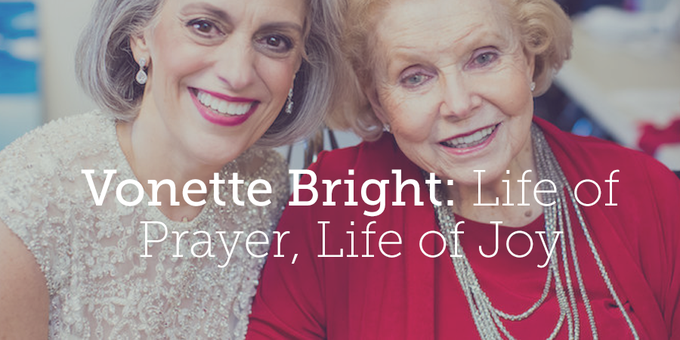 Two phrases, chosen by her family and staff, summarize the fruitful legacy of Vonette Zachary Bright: A life of prayer, a life of joy.

Two days before Christmas 2015, Vonette was taken home to be with Christ, where she longed to be, at age eighty-nine.

Those words—a life of prayer, a life of joy—beautifully depict both the public and private life of this woman. She was prayerful and joyful in carrying out her more visible ministry efforts. She was also a prayerful, joyful wife, mother, and friend. And rather than diminishing as she aged, these features were true in increasing measure all the way to the end of her journey.

The path of the righteous is like the light of dawn,
Which shines brighter and brighter until full day. (Prov. 4:18)

A Life of Prayer

In 1951 Vonette and her husband, William (Bill) R. Bright, founded Campus Crusade for Christ (now Cru in the U.S.). She faithfully, prayerfully, and joyfully served at her husband's side as his chief companion, consultant, and cheerleader, as together they sought to make Christ known throughout the world, by every means possible.

She modeled a joyful spirit of hospitality, always with an open heart and home, ever a helper to her husband and to the mission, vision, and ministry God had put on their hearts.

After faithfully raising their two sons, Vonette exhibited an extraordinary, tireless passion and perseverance in mobilizing others to pray. She pressed on in the battle when most would have wearied and moved on to less demanding and daunting tasks.

A Life of Joy

Vonette refused to wallow in grief or "take it easy" after her beloved husband died in 2003. As a widow in her 70s and 80s, no one would've faulted her for wanting to relax and leave the heavy lifting of intercessory prayer ministry to younger backs. But like Anna, that indefatigable, elderly widow of old, Vonette never departed from God's presence, "worshiping with fasting and prayer night and day," giving thanks to God for the fulfillment of His promises in Christ, and speaking of Him to all who were waiting and longing for His redemption (Luke 2:37–38).

Vonette traveled thousands upon thousands of miles in those sunset years, continuing to serve the Cru staff while taking on numerous other ministry endeavors.

She found great delight in encouraging anyone and everyone who sought to proclaim the gospel; I recall her telling me a decade or so ago that she was taking an online course so she could become an honorary member of a Christian biker's association that was using Crusade resources to evangelize lost bikers.

A life of prayer, a life of joy.

Bill and Vonette's friendship with my parents began before I was born, so I've never known life without Vonette. She was a second mother to me and never hesitated to express her thoughts with the kind of candor mothers reserve for their own kids. Hence her words to me at age twelve: "Honey, we've got to do something about your hair!"

Through the years, she would often call—always with sincere words of affirmation and encouragement, consistently celebrating the ministry the Lord was giving me, and inevitably challenging me about some undertaking she felt would advance the gospel.

Vonette had a huge, persistent burden for calling Christian women to be kingdom-minded and for mobilizing them to pray for revival and spiritual awakening. "We've got to get 100,000 women together to pray," she insisted on a call a couple of years ago. A three-hour simulcast concert of prayer will be a part of True Woman '16 in September. I pray it will engage hundreds of thousands of women in earnest, united prayer. The concert of prayer is the fruit of that conversation.

In mid-November, less than six weeks before she died, Vonette traveled from Orlando to Chicago to participate in my wedding to Robert Wolgemuth. She was giddy with joy at the prospect of my marriage, and nothing and no one was going to keep her away. I will always treasure the prayer she prayed over me in the bride's room moments before the service began (preceded by some practical marital advice from "a mama's heart"!).

When Robert and I returned from our honeymoon, we had the unexpected providence of staying in Vonette's guest apartment for six days. What a gift it was to share precious hours with this faithful servant of the Lord—praying, reading Scripture, talking about heaven, singing, just being together.

What a joy to have a front row seat on the sideline as this precious, homeward-bound saint reflected on God's goodness, anticipated what He had in store for her, and pressed toward the finish line, still longing to be fruitful during her remaining time on earth.

Vonette's son and daughter-in-law, Brad and Kathy Bright, faithfully oversaw her care in this season and kept others informed of her condition. In her next-to-final update, when Vonette was within eyesight of heaven, Kathy wrote:

So many deep and powerful lessons Mother and the Savior are teaching us even now. Her caregivers have been blessed by the fact that even in her weak state, Mother says, "Thank you, honey; thank you, thank you," when they help her. She is as gracious and grateful now as she has always been.

"Consider the outcome of their way of life, and imitate their faith" (Heb. 13:7).