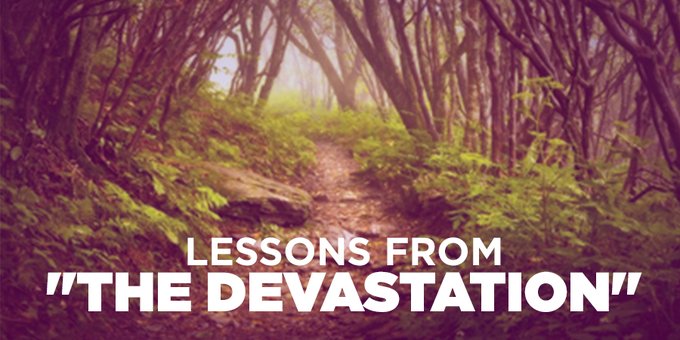 Lessons from "The Devastation"

Fact: You are either heading out of the wilderness, or you are heading into it.

My pastor, Tim Cook, recently preached a killer sermon about Jesus’ time in the wilderness. I was struck by his description of the wilderness where Jesus was led and tempted. Tim told us the wilderness described in Matthew 4 was the area that surrounded the Dead Sea. It was thirty-five miles long and fifteen miles wide with almost no drinkable water. Because of this, birds were known to drop out of the sky dead mid-flight if they attempted to cross the wilderness. The ancient Jews called this spot “The Devastation.”

This nickname alone provides tremendous context for the forty days and forty nights Jesus spent in the wilderness. This wasn’t a serene camping trip. It wasn’t a personal retreat. Jesus’ time in “The Devastation” was a time of anguishing trials. When we see this story correctly, we are more able to apply the example of Jesus to our own lives the next time we find ourselves in the wilderness of devastation.

Rapid fire, here are five big lessons Matthew 4 teaches us about The Devastation:

1. The Wilderness Often Comes After A Victory.

We like to think of our spiritual lives as a steady climb up a predictable hill. Just keep putting one foot in front of the other and eventually we will summit, having “arrived” at the apex of what it means to follow Christ.

But the reality is there will be very high highs, often followed by very low lows. God is God, and we are called to be faithful at both elevations.

2. Sometimes, God Chooses the Wilderness for Us.

Matthew 4:1 says, “Then Jesus was led up by the Spirit into the wilderness to be tempted by the devil.”

God didn’t simply allow the wilderness. He chose it. It was according to His plan and by His leading that Jesus entered The Devastation.

We don’t like to think that God would ever choose suffering for us, but it is so important to know that God is sovereign, even in The Devastation. He isn’t surprised when we end up there. He didn’t fall down on the job, resulting in our suffering. Sometimes He simply allows suffering, and sometimes, as was the case in the life of His Son, He chooses it because it is for our good.

3. The Tempter Thrives in the Wilderness.

Jesus hadn’t been in The Devastation long before the Enemy seized the opportunity to strike. Matthew 4:3 records,

“The tempter came and said to him, ‘If you are the Son of God, command these stones to become loaves of bread.’”

When we face periods of tremendous loss or disappointment, we are especially vulnerable to the lies of the Devil. He would like nothing better than to convince us that God is not really good, or that He doesn’t really love us, that His promises are not really true, or that He’s not there at all when we face seasons of pain. If you are in the wilderness now, learn to recognize the lies of the Tempter.

4. You Need God’s Word To Survive the Wilderness.

Every time Jesus was tempted in the wilderness, he quoted Scripture. Like a broken record, when Satan came at Him with a lie, Jesus responded with, “It is written.”

God’s Word can shore you up, get you through, and help you win big battles. The kicker is you must study God’s Word when you’re not in the wilderness in order to have the right weapons in your arsenal when The Devastation comes.

5. The Path Through the Wilderness Leads to the Kingdom.

Immediately after Jesus’ time in the wilderness, my Bible adds this little notation: “Jesus Begins His Ministry.” Jesus walked out of The Devastation and straight into life-transforming, kingdom-building, culture-shaking ministry. God has a habit of taking our seasons of loss and turning them into big gains for the Kingdom.

Would you describe this season of life as The Devastation? Do you sometimes feel like you may not make it across without dropping dead? Consider the lessons Jesus teaches from the wilderness and take hope.