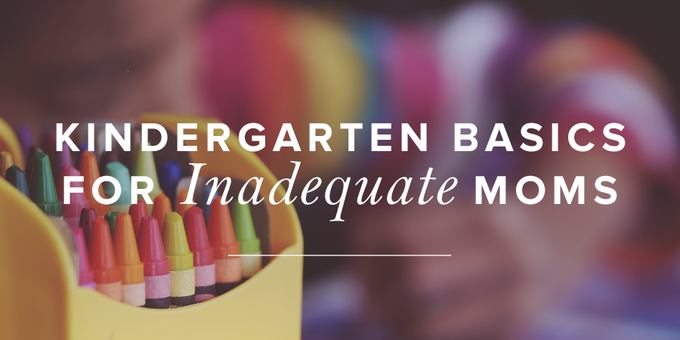 I had been inflating this day for weeks, saying things like, “You’re going to love kindergarten, Buddy.” To build up to the big event, we found Mrs. Plantinga’s picture in the yearbook, interviewed Jonathan—our neighbor who had once partaken in the joy of being part of Mrs. Plantinga’s class, and carefully reviewed the classroom routine (compliments of Jonathan) until Cole felt quite sure that September 7th was going to be the best day of his life.

As Cole pulled open the door of the school, he wore an expression that matched Christmas morning, when he would race down the hall toward the presents. Only today there would be no hallway running! For today he was a kindergartener.

This was it. His first day.

We entered the classroom, all abuzz with moms helping kids pull glue sticks and markers from backpacks and kids posing for photos at their new desks. I pulled out my video camera and panned the room’s apple posters and number charts, until I spotted the lady of the hour in the viewfinder.

“There’s Cole’s kindergarten teacher!” I said into the microphone. My lock on her jiggled as Cole tugged on my arm. “Mom, I can’t find my spot.” I turned off the camera and began scanning the nametags taped to the tables. Trevor . . . Carter . . . Cassidy . . .

Hmmm . . . this wasn’t good. I gave my boy a reassuring pat on the shoulder, and we walked hand in hand toward the knowledge source of all things kindergarten. Mrs. Plantinga listened to our predicament then kindly scanned her list as Cole swung his backpack into my leg.

“Hmm . . .” she said, her brow furrowing deeper as she flipped the page. Then she exclaimed, “Oh, honey! You’re in the afternoon class!”

The glorious moment I had been inflating for weeks was now punctured. Horrified, I looked down at my son, whose expression of incredulous shock now shifted to outrage. A little squeak escaped his gaping mouth, signaling an impending meltdown. Quickly, I bent down and nervously began smoothing his hair, whispering, “It’s okay, sweetheart. The afternoon class is just as good! We’ll come back after lunch.”

But no. It was not okay. And Cole was about to let us all know it. “I wanna go to kindergarten!” he shrieked, bringing all of the room’s commotion to an immediate halt. Oh, boy. There was only one thing to do.

I began strong-arming my screaming, kicking, begging five-year-old toward the door. A few mothers smiled sympathetically. Others dropped their heads in empathetic embarrassment. One woman looked on in open disgust.

“I wanna go to kindergarten!” Cole’s agonizing wails could be heard all the way down to the fifth grade classrooms, as I dragged him inch by inch from the building.

How could I have made such a mistake? I was probably in a frenzy—trying to make dinner, feed the baby, and answer six questions—the day I opened the mail and misread the “Kindergarten P.M.” clearly stated at the top of page (rather than “A.M.” as requested).

It wasn’t the first time I had missed a detail or confused information. Not by a long shot. I had joked plenty of times about being such a “bad mom.” But this time it felt very, very true.

I could only imagine what my son’s teacher was thinking about the boy from her afternoon class who had come to disrupt her morning class. And I didn’t want to know what the other moms were thinking.

Fear gripped my heart. Would my constant blundering weigh my son down in life? Would my negligence hold him back? It felt like the whole education system was shaking its head, saying, “What a shame. If only he didn’t have such an inadequate mother.”

This next week, Cole will start his senior year of high school. I wish I could tell you that my fears were ridiculously unwarranted. In actuality, some of my other mom-mistakes make that kindergarten blunder seem pretty tame. I’ve caused fires and car accidents. I’ve overcorrected and under-corrected. I’ve caved in too soon and dug my heels in too deep.

As a mom, I often feel like I know the right way. I’m convinced I can make everything turn out. I have a strong urgency to corral my kids onto the path that I am sure leads straight to a happy ending.

But then there are these moments when it becomes readily apparent that I don’t have what it takes, and I can’t make everything turn out right. I abhor moments like those. Yet they offer such beautiful perspective from the Lord.

That voice saying, “It’s all up to you!” is not God’s and never was. That’s the voice of my sinful heart, craving autonomy rather than dependence, wanting control instead of surrender, and longing to write my own little story rather than be part of God’s.

That first day of kindergarten, God had a lesson for me. From kindergarten through graduation, God has been pressing me to put hope and confidence in Him alone, not anything else—and especially not myself.

Fearing God means humbly acknowledging how much I need Him. It’s orienting my life around Him. It’s recognizing He is the fountain of life that I can’t live without. Putting confidence in myself is the opposite of this. It’s like taking a desert hike without packing water—a trap that leads to death.

Relying on myself to be all that my children need is not life-giving to them or me. Instead, it’s like putting hope in a mirage that always over-promises and disappoints. As a mom, I can and will fail my children. I will make mistakes, put them at a disadvantage, and let them down. But when I put my confidence in God and rely on Him, I train my children to do the same. Even when I fail to pack what my kids need for their trek through life, I don’t despair, because I’m showing them how to make their way to the Refuge always gushing with life-giving springs.

God will never let my children down. He is a constant, bubbling source of refreshment, joy, and hope to them, no matter what difficulties or disappointments they face. He will always be enough.

When we got to the car that first day of kindergarten, Cole stopped crying and I started. As I buckled him in, I said, “Cole, I am so very sorry! Mommy made such a big mistake about kindergarten.” I looked into those beautiful blue eyes and held his little cheeks in my hands, weeping over the distress I had created.

But Cole said, “It’s okay, Mommy.” And it was. I prayed with him, and then we enjoyed a sunny morning at the park and lunched at his favorite “happy meal” spot. When we reported back to kindergarten, he bounced back in and grinned brightly when he found his nametag.

Oh the freedom in recognizing that I will never be all that my kids need, but God always will!

As my son inches toward adulthood, there is still the temptation to put confidence in my plans, perspective, and hopes for the future—and then despair when I fall short as a mom. So it’s helpful to review the lesson God had for me on his first day of kindergarten.

It’s not all up to me. My confidence is not in myself. My role as a mom is to lead my children to their only life-giving refuge: Jesus Christ. He is the One they need, and in Him alone, I have strong and lasting confidence.

Do you struggle with inadequacy, either as a mom, or in some other way? What’s one situation or person that you are craving autonomy or control over—saying, “It’s all up to me!”? Spend some time repenting of your sin of self-reliance and meditating on Proverbs 16:1–9. Invite God to be the one you put your confidence in.