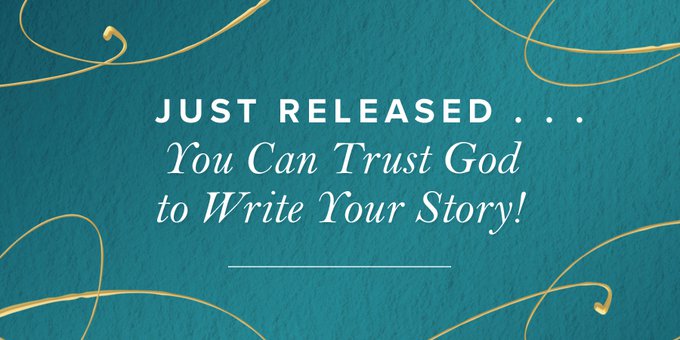 You can trust God to write your story . . . isn’t that a wonderful thought? The idea that God is actually in control and involved in the everyday details of our lives? But it’s not just a happy imagining. It’s true. God’s Providence is at work, all the time, behind the scenes and sometimes right in front of us.

Captured by this truth, Nancy DeMoss Wolgemuth and Robert Wolgemuth wrote a brand-new book, You Can Trust God to Write Your Story: Embracing the Mysteries of Providence.

Today, you can get your copy for a donation of any amount to Revive Our Hearts. Just head over here.

(And if you read to the bottom of this post, you can enter for the chance to win one of five copies for you or a friend.)

Now, check out this sneak peek at from the first chapter of You Can Trust God to Write Your Story.

Not long ago we were invited to a dinner meeting at a lovely restaurant in downtown Grand Rapids, Michigan.

When we arrived, we gave the maître d’ the name of our party. We were promptly escorted to a private room, where our server greeted us warmly. Once we were seated, he handed each of us a leather-bound menu with the name of the restaurant embossed on the cover. Classy.

Then, opening the menus, we were surprised to encounter the latest in touch screen technology. Very cool.

We placed our orders, then settled into comfortable, uninterrupted conversation. In just the right amount of time, our server returned first with our appetizers and a little later with our salads. But when he returned the next time, he was accompanied by three additional waiters, who carried our entrées. This was the first time we had seen these other three, but they seemed to know exactly who had ordered what. This was especially impressive because the plates they were holding were covered with shiny chrome domes.

Placing our dinners in front of us, the four servers looked to each other for a signal. Then, at precisely the same moment, the silver covers were lifted . . . followed by a chorus of oohs and aahs. The entrées looking up at us after the big reveal were exactly what we had ordered.

The problem is when it comes to real life, what’s on our plates under those chrome domes is often something we didn’t order and might not even want. And because the selection on others’ plates is clearly visible, we may be tempted to compare ours to theirs.

“That’s not fair,” we may protest. “This isn’t what I wanted. Why didn’t I get that dinner rather than this one?”

To make things worse, we may not have had a chance to “order” at all.

What we’d prefer would be to choose what looks good to us, our best-life-now hopes and dreams, and then to have the server return, lift the silver dome, and—voilà!—exactly what we wanted. And occasionally that may be the case. But sometimes it’s not. Often it’s not. God’s divinely apportioned sovereignty is usually a surprise to us mortals.

So, why would we trust a God who doesn’t give us what we want?

In fact, why would a good, loving God serve up unappetizing portions to us?

You can keep your cancer. I’ll take a pony.

This book is about trusting God to write your story. But as we’ve said, this is really about God’s Story. His ways. His watchful care over His creation. His Providence.

Providence—it’s not a word you hear a lot in everyday conversation. In fact, a search of Google books shows that the use of the word in print has steadily declined since 1800. But it’s an incredibly important word and concept.

Tucked inside this three-syllable word is the shorter word provide, which combines the Latin videre, meaning “to see” (think “video”) with the prefix pro, meaning “before.” Pro-video, “to see before”—that’s at the heart of God’s Providence.

God goes before us. He sees and knows everything before it even happens. And He makes provision for whatever we will need at that time.

Stop and think about that for a moment. Imagine the peace, comfort, and hope that would be ours if we really believed that He knows and sees everything that lies before us, before it happens—and that He has already provided whatever we will need when we get there! What freedom from fear, anxiety, and dread that should give us.

This is why I (Nancy) often say, “I love living under Providence!” What an amazing gift this is to us.

If we were able to sit down with Jesus and chat about Providence, He might explain it with a simple word picture, much as He did on a Galilean hillside a long time ago:

Look at the birds of the air: they neither sow nor reap nor gather into barns, and yet your heavenly Father feeds them. Are you not of more value than they? . . . Consider the lilies of the field, how they grow: they neither toil nor spin, yet I tell you, even Solomon in all his glory was not arrayed like one of these (Matt. 6:26–29).

Birds. Wildflowers. Human beings. In His Providence, God sustains, attires, and cares for all of His creation.

When Jesus wanted to help people understand and trust God’s Providence, He reminded them that God does a more than adequate job of feeding birds and clothing flowers. So, what does that mean for you? It means you have a God who cares deeply about you and who will meet your needs. He doesn’t just watch the birds eat or take photos of white blossoms. He is personally involved with the feeding and clothing. And what He does for these, He will do for you.

But that’s not all there is to God’s Providence. The word also speaks to His wise, sovereign rule over every detail of His creation.

Where would we be without the certain knowledge that “He’s got the whole world in His hands” and that every detail of our lives and days is ordered by our all-wise, all-knowing, loving God? Far from being a crushing burden to be borne or diminishing our value, the Providence of God is a great and precious gift. To be helpless victims of chance, tossed about on the storms of life—that would be forever disconcerting and tragic. Thank God it is not the case.

The Old Testament book of Exodus includes many providential moments. One of the most dramatic was when the Israelites were finally released from their Egyptian captors. They were escaping eastward, but there was a problem. They came to a massive body of water, with no way over or around it—and no boats or life jackets. What’s more, a ferocious army was bearing down on them, brandishing swords and plenty of hostility.

In the next few hours, God’s Providence would be on display in a way that makes bird feeding and flower dressing look like child’s play. But His people didn’t trust that it would happen. In spite of God’s relentless faithfulness up to that point, in spite of watching Yahweh perform one spectacular miracle after another on their behalf, they feared for their lives and fell back into their trademark response: complaining. “So, dying in Egypt wasn’t good enough for you?” they griped to Moses as they stood there on the banks of the Red Sea. “You just want us to die here in the wilderness?” (see Ex. 14:11–12).

Undaunted, Moses had another plan. He trusted God. Proving that he was the right man for the job, he announced to the restless, fearful mob:

And show up He did. Not only did He provide a path through the water and drown the pursuing army, He went on to lead the ragtag group of Israelites through the wilderness, providing food, water, protection, and more until they finally reached the land He had promised them.

Shades of watching God feed our birds or staring in awe at the little white wildflowers spread out in the woods.

Our heavenly Father looks at our circumstances, our concerns, and our anxious fears, and says, “Take heart, My child. I’ve got this.”

You may not be able to see His purposes or plan at this point. But by His grace, you can rest in His Providence, confident that . . .

And you can trust Him to write your story.

This excerpt adapted from Nancy DeMoss Wolgemuth and Robert Wolgemuth, You Can Trust God to Write Your Story: Embracing the Mysteries of Providence (Chicago: Moody, 2019). Used with permission.

How have you seen God’s Providence at work in your life? Tell your story in the comments below, and then enter to win one of five copies of You Can Trust God to Write Your Story.

Previous Post Join Us for Revive ’19 LOCAL!
Next Post God’s Providence in the Little Things of Life