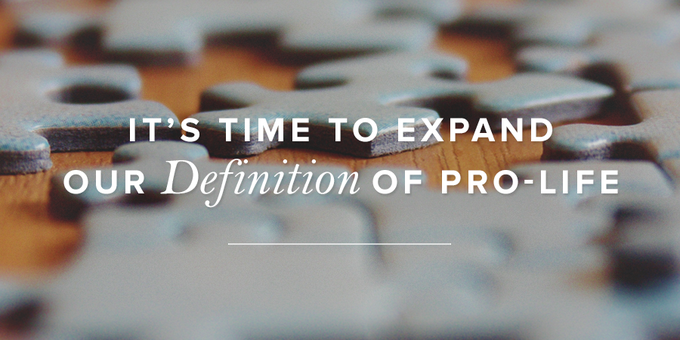 It's Time to Expand Our Definition of Pro-Life

As I sit here observing the aftermath of Election 2016, I can’t help but reflect on the impact that potential Supreme Court nominations had on the race. Within the Republican Party, and specifically the traditionally conservative evangelical community, we are left with a gaping rift, one that won’t be quickly sutured by calls for unity and #comehome.

“It’s the economy, stupid,” was the phrase coined by James Carville, campaign strategist for Bill Clinton during his presidential bid against George H.W. Bush. The phrase signified the notion that a single issue—the economy, in Carville’s opinion—trumped every other issue in the mind of the American voter. For many evangelical voters however, as demonstrated in every presidential election in my memory, that overriding issue can be summed up in one word: abortion.

It’s an ugly word, as sterile and slicing as the procedure itself. Sure, many evangelical voters have cited other issues affected by Supreme Court appointments during this gaudy circus of an election cycle. But when it comes down to it, when you get to the brass tacks of why a majority of evangelical voters are willing to support a less-than-admirable candidate it comes down to one thing: babies.

Over 58 million and counting in the past forty-three years in this country alone.

It’s tragic. It’s heartbreaking. Let’s just be clear about that right off the bat.

But Supreme Court justices? Anti-abortion legislation? Protecting the unborn? These are all noble causes, and ones that we should indeed champion. But my dear friends, readers, women who are committed to drawing worldly eyes to the loveliness of Christ and the beauty of the gospel . . .

Looking for the Missing Pieces

Like a jigsaw puzzle dumped out of its box, with pieces scattered here and there, many in the pro-life movement have taken the tedious first steps toward building the case for life. We have sifted through the pieces, some upturned, some down. We’ve located the four corners of the anti-abortion movement, we’ve completed a couple of edges by exposing despicable practices within the abortion industry. We’ve begun to piece together some patches of blue sky by advocating for adoption services and providing physical, emotional, and spiritual support for expectant mothers.

But tedious as it’s been, this has been the easy work—the obvious straight edges that align just right with our evangelical social structure. Now it’s time to finish the puzzle, to solidify what the meaning of “pro-life” is. But first, my friends, we have to find the missing pieces.

The straight edges of the unborn have been easy to pick up and place. We know one when we see one, and we can tell where it goes. But the disabled? The poor? The immigrant? The refugee? The “one-another” who looks different, talks different, lives a life foreign to that which is comfortable in our little world?

Let’s take it a step forward: The rebellious. The thief. The sluggard. The druggie. The one whose very essence makes you cringe and blanche and groan. Yes, Christian, I’m saying it—the “thug” and the “illegal alien.”

Does our pro-life message extend to those, or are we too afraid to leave the edges of the puzzle and move in?

Why We Need the Middle

Our crusade for the sanctity of life will not be complete until we first believe in our hearts the fact that every human being, from conception to natural death, is created in the image of God. In Genesis 1, we read:

So God created man in his own image, in the image of God he created him; male and female he created them (v. 27).

Tony Reinke wrote an article recently that described how Christian culture has, perhaps, confused the issue of what it truly means to be created in His image:

Christians often speak about how humans are “image-bearers,” but this is a misleading way to say it, Kilner told me. The image of God is not found in the interior of our bodies, and it’s not located in our rational or creative powers. Instead, he said, referencing 2 Corinthians 4:4 and Colossians 1:15, “The image of God is Jesus Christ.”

General mankind, the first humans (Adam and Eve), and you and me—we are not the image of God. “Christ is the image, and people are created in his image,” Kilner said. “The preposition ‘in’ more specifically means ‘according to.’ So the idea here is that God created people according to his image, which is Jesus Christ. Christ is the standard, the model for what a human being should be.”

Did you catch that, reader? We are not the image that God sees when He looks through the mirror of His creation. Christ is! He is the image!

That Spirit is one in the same with the Spirit that dwells within you and me, believer. And by that Spirit, can we not love, serve, and sacrifice, extending grace upon grace and mercy upon mercy among all of those who are created in the image of the Savior we love?

In trying to explain how words like “everyone” and “everything” were indeed singular, my seventh-grade English teacher hammered it into our heads: “Everyone means: Every. Single. One.”

Folks, to use a recent political gaffe, we all began in a basket of deplorables. Someone recently said that when we think of God’s plan of adoption, we automatically think of orphans. But we were not orphans. We were His enemies.

And perhaps when we begin to treat the downtrodden, the different, and indeed, our enemies in a way that honors the image of Christ, the world will take a second look at the pro-life movement.

When we refuse to tolerate racist notions in our churches and in our communities with the fervor with which we oppose abortion, perhaps the secular African-American community will take a second look at the church.

When we work to bring forth the soul-saving message of the gospel to Syrian refugees with the fervor with which we advocate for adoption, perhaps our Muslim neighbors will take a second look at new life in Christ.

When we embrace our law-abiding immigrant friends as Christ embraced us, His enemies, perhaps our Hispanic neighbors will take a second look at the cross.

Until Every Piece Is Found

You know that puzzle? The one you worked on for two weeks last Christmas vacation? When you got down to the last three pieces and realized one was missing? That feeling of discontent, of incompletion? The pro-life movement has come a long, long way in the last thirty years. More work needs to be done to save baby puzzle pieces, yes, but even if we preserve the life of every unborn child, the work of the pro-life movement will not be finished until we find Every. Single. Piece.

Lord, in our fervor to protect little ones being carefully knit in the womb, we have grown calloused to those on the outside who also bear the image of our Savior. Forgive us for forcing the hand of our government in caring for the needs of the poor, the widows, the orphans, the aliens, the others in our communities because we, Your Church, have neglected to do our job. Forgive us for accepting what is deplorable to you: the marginalization of the elderly, the disabled, the disadvantaged. We’ve outsourced our vocation as lovers of the weak to those who can provide for physical needs, but no sustenance for the sin-struck soul. Forgive us, Lord, and move us to action to share the gospel with a love that is worthy of the image of Your Son.

Friends, Supreme Court appointments are of great importance. There’s no doubt about that. But if we, the Church of Christ, would step out of our comfort zone and dive headlong into caring for, loving, and doing something for the people behind the issues we have bickered about during Election 2016, we could have a far greater impact than a whole bench full of conservative judges.

Let’s search out every piece of this puzzle, to honor our Shepherd who is not content that any of His sheep would perish (2 Peter 3:9). Let’s advance the pro-life movement by seeking out pieces in every tribe and tongue, nation, and neighborhood. Then they will know that every life is precious. Every. Single. One.

Who are the downtrodden, the outcast, the marginalized in your community? How can you help to meet their needs and broaden the pro-life message? Is there someone with whom you can share both physical bread and the bread of life?

Be Pro-Life in Action, Not Only on Paper