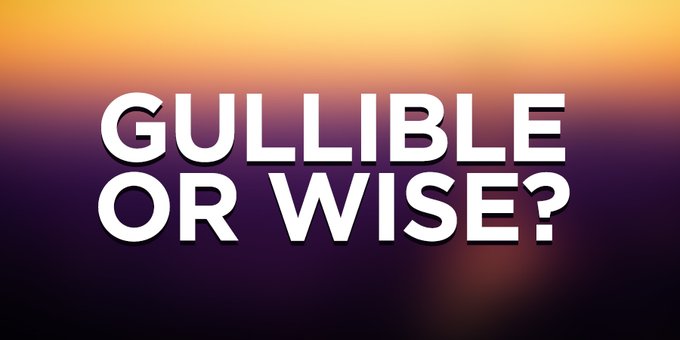 In 1957, the British Broadcasting Company (BBC), produced a program on its prestigious Panorama programme informing people that a certain kind of pasta came from trees. In a reverential BBC documentary tone, Richard Dimbleby explained how spaghetti was harvested from trees, dried, and processed into strands of spaghetti.

The audience not only listened to the spoof, some phoned in to ask where they could buy a spaghetti tree.

Although I strive to be a Proverbs 9:10 wise, God-fearing woman, sometimes I can be so gullible. Just ask my sons. They’re always trying to pull one over on their mama. Sometimes they feed me lines just so they can say, “Gotcha.”

And sometimes the enemy of my soul tries to pull the same thing. Where once I could describe my life journey as “Gullible’s Travels,” now I see myself as a Wise Warrior Woman. I’m more alert to the devil’s sneaky tactics as I walk hand-in-hand with God, wielding the Sword of the Spirit, the Word of God.

Recently, though, I caught myself believing my adversary: “You aren’t as pretty as that other woman speaker. Look at her white, straight teeth and her trim ankles.” (Yes, the enemy says stupid things like that!) “Don’t you see,” he continued, “that’s going to get in the way of your message when you speak? Maybe you should decline the offer to speak at that luncheon.”

I had to remind Satan of the truth (and I needed to hear myself proclaim it). God is the source of my strength and any influence I hope to have; and I have determined to be obedient to His call, regardless of my imperfect appearance.

One of the most powerful exercises we can do as women is contrast truth and lies. Maybe you’ve heard something you think might not be accurate. Ask, “What’s the truth here?” Try to find a Scripture passage that shows the difference between truth and lies on that topic. (There are lots of them in the book of Proverbs.)

When you hear something in the culture that doesn’t ring true (maybe on TV, in a movie, or in a book), confront the lie by quoting Scripture. This was the pattern Jesus gave us when He rejected the devil’s twisted thinking. Over and over He said, “It is written . . .” (Matt. 4:3–11).

You might also want to make a list of positive character qualities (love, joy, peace, self-control, integrity, etc.), and then memorize Scriptures that relate to each one. Or try some role-playing. Imagine that someone—a friend, Satan, or even your own fleshly appetites—is trying to tempt, deceive, or sidetrack you with the opposite of that quality. What would your response be? What Scripture could you quote to stand against the lie or distraction?

For example, do you want to practice gratitude? Memorize Scriptures like Psalm 136:1: “Give thanks to the Lord, for he is good, for his steadfast love endures forever.”

Pretend something has made you feel discontented. What is your first response? What Scripture comes to mind? What action will you take? We role-play with our children to give them tools to combat the evils in the culture. Why not role-play with the unruly, stubborn “child” within us?

What do you do to help you recognize the enemy’s lies?