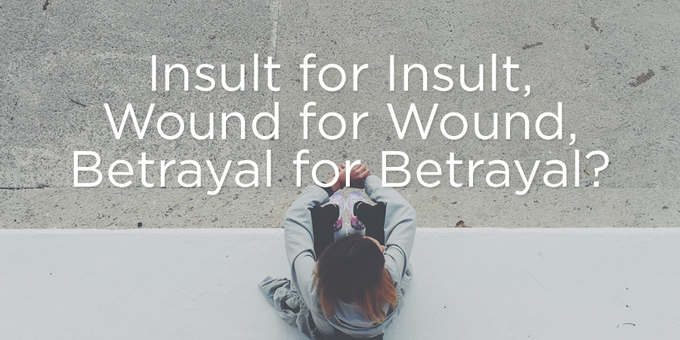 Tit for Tat is the name of a Laurel and Hardy slapstick comedy released in 1935. In the film, Stan & Ollie open a hardware shop right next to Charlie Hall's grocery store. A misunderstanding occurs and Hall takes revenge on Stan & Ollie. Stan & Ollie retaliate.

The back-and-forth antics start with silly attacks such as mashed potatoes in the face, eggs cracked on the head, and a curling iron pressed on the nose, and escalate in intensity until both the hardware shop and grocery store are on the verge of being demolished. The plot is simple—every attack by one party triggers a retaliatory attack by the other. The movie is funny. But sadly, this destructive type of tit-for-tat interaction characterizes many real-life relationships. We return insult for insult, slander for slander, hurt for hurt.

The phrase "tit for tat" dates back to the sixteenth century. "Tit" is an old Middle English word meaning tug or jerk. "Tat" comes from the Middle English "tatele," meaning to prattle or tattle. The phrase refers to an exchange of insults or attacks involving retribution or retaliation. The British say tit for tat; the Dutch, dit vor dat; and the French, tant pour tant. The corresponding Hebrew phrase, "eye for eye, tooth for tooth" is based on an ancient law that dates back to the time of the patriarchs.

The Punishment Matches the Crime

The Lex Talionis law of retaliation was widespread throughout the Near East. It was a judicial principle that ensured that the punishment fit the crime. It protected the innocent by ensuring that justice was served, but also protected the guilty by ensuring that the punishment was not overly excessive. If a man poked out his neighbor's eye, the eye of the offender would be the maximum penalty the neighbor could demand, "Fracture for fracture, eye for eye, tooth for tooth" (Lev. 24:19–20). Exodus 21:24–25 includes other examples: hand for hand, foot for foot, burn for burn, wound for wound, and bruise for bruise.

The Lex Talionis law of justice is one that's deeply ingrained in the human spirit. It incorporates the concept that a crime deserves to be punished and that the punishment must match the crime. Just think of the cries of two feuding children. The "She hit me!" is almost inevitably followed by the defense, "He hit me first!"

Do you ever administer judgment according to the Lex Talionis law? Do you return sarcasm for sarcasm, slander for slander, criticism for criticism, or hurt for hurt? I must admit that I often do. When someone injures me, I feel justified in injuring that person in kind. In order to serve justice, I want to administer a tit-for-tat judgment on their crime.

The Lex Talionis law governed fair and just judgment, but there were additional concepts that God's people were to take into consideration when deciding how to act toward an offender—mercy, compassion, and humility.

"This is what the LORD Almighty said: 'Administer true justice; show mercy and compassion to one another'" (Zech. 7:9).

And what does the LORD require of you? To act justly and to love mercy and to walk humbly with your God (Mic. 6:8).

God's mercy and compassion have always tempered His judgment. But the full extent of His mercy wasn't revealed until He sent His Son to die for us. According to the Law, eternal death is what we deserve. But because of God's great mercy, we are offered eternal life.

This offer became possible through Jesus, who fulfilled all the demands of the Law (Matt. 5:17–18). All fair and just penalties "eye for eye, tooth for tooth, and life for life" were paid on the cross with His holy blood. That's why we who believe in Jesus are no longer under the letter of the Law. We're free to live by a greater standard.

James 2:13 contains a warning as well as a promise. First the warning: "Judgment without mercy will be shown to anyone who has not been merciful."

Let me repeat those words. Think about them. Let the meaning sink in: "Judgment without mercy will be shown to anyone who has not been merciful."

I don't know about you, but that warning strikes fear into my heart. I judge others whenever I treat them according to what I feel they deserve rather than according to the mercy God has shown me.

As we depend on Him, He empowers us to respond to evil with good.

I need only think of how impatient I was with the girl who served me so slowly at the coffee shop this morning to see that I am guilty of judging. The thought makes me fall to my knees in shame. And that leads me to the second part of James 2:13, the promise:

The word "triumphs" is a unique word that means "to be superior; to boast in triumphant comparison with." Because of Jesus, God's mercy takes priority over His judgment. His mercy triumphs over my sin. And because I have received mercy, I have the capacity to extend mercy to those who least deserve it. Mercy can triumph over my tit-for-tat demand for justice. Instead of demanding justice, I can treat others as God has treated me.

Jesus instructed His disciples to respond mercifully to evil behavior rather than giving back tit for tat.

"But to you who are listening I say: Love your enemies, do good to those who hate you, bless those who curse you, pray for those who mistreat you" (Luke 6:27–28).

By nature, we want to return insult for insult, anger for anger, betrayal for betrayal, screaming for screaming, criticizing for criticizing, wound for wound. Thankfully, Christ can set us free from this habit. As we depend on Him, He empowers us to respond to evil with good.

This post was originally posted on GirlsGoneWise.com under the title Tit-For-Tat.