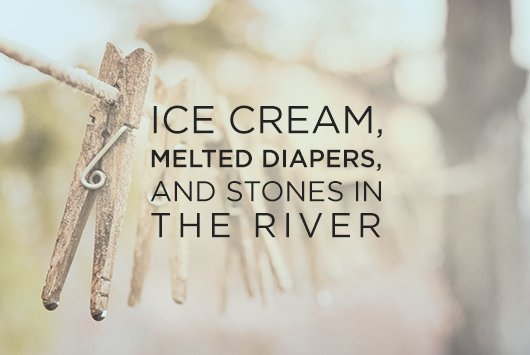 Ice Cream, Melted Diapers, and Stones in the River

I don't think I knew my family was "poor" when I was a young child. I had all the self-awareness of a normal four-year-old, consumed by playing house and keeping up with my older brother. But poor we were, a family of four barely getting by while my dad was in seminary. I credit my parents with sheltering their children from worries and fears about how we would survive. Or maybe they weren't all that worried. All I know is that leaving a full-time job to move to a new town and go to school full-time with no steady income and a family to care for would scare most people to death.

There isn't space enough to record all the ways God provided for us.

I used to be a worrier. My husband always knew when I was worrying because I would get a little bump on my forehead—my "worry tell." But the Lord has used experiences from my early childhood—twenty-five years ago—to free me from much of my anxiety. The words on the metaphorical doorposts and foreheads of my family were those of God's faithfulness and provision. The stories I tell my children today are those I lived—those recounted to me for years growing up.

There was the time a friend of our family came into our home and smelled melting clothes, never saying a word. The following morning the phone rang and on the other end of the line was this friend's husband telling my parents their new clothes dryer (one that wouldn't melt plastic diaper liners) would be delivered that day from Sears.

Or the time my brother desperately wanted to go to Baskin Robbins for ice cream. The problem was that we couldn't afford groceries, much less a special trip to taste even just one of their thirty-one flavors. But rather than just saying "no," my mom instructed my brother to pray and ask God to provide money. I don't know what she thought would happen, but clearly she had seen God provide many other times—why not now? That same afternoon, my brother opened the mailbox to discover a Valentine card, weeks late, from our grandparents. The address was incorrect, and it had been rerouted several times before finally arriving at its destination. Inside was a crisp five dollar bill—an answer to a young boy's faith-filled prayers. I get teary every time I recount this story to my kids and watch their faces brighten with wonder at the thought of answered prayers.

There isn't space enough to record all the ways God provided for us. Monthly grocery deliveries from my grandmother who lived a few hours away. Cars gifted to us. Even an incredible story about my parents believing they were to pledge a certain amount to the church's love offering, only to discover at the deadline that they didn't have the money. So they faithfully gave the only thing of monetary value they possessed—my mom's engagement ring. When the pastor told the church a woman had given her ring, it was bought back, twice over, doubling the amount pledged. Even her ring is a testament to God's unwavering faithfulness and provision.

I pray they see the wonder of a God who gives gifts far greater than ice cream—gifts of peace and forgiveness found only in the life, death, and resurrection of His Son.

So now, as I raise children of my own, I wonder what their stories will be. We aren't "poor" by most people's standards, and we don't have the same awe-inspiring tales to tell. Yes, there are times when I'm not sure how God will provide for a new heater, a water leak, or car problems. But when He does, it's another chance to set up a stone to remember His faithfulness. Just as Joshua set up twelve stones in the midst of the Jordan River to remember and recount to the children of Israel all God had done (Joshua 4), we have stones of our own to set up. My children inherit generations of grace upon grace, gift after gift. I pray they see these gifts and know how dearly they are loved. I pray they see the wonder of a God who gives gifts far greater than ice cream—gifts of peace and forgiveness found only in the life, death, and resurrection of His Son.

And I pray they (and their mother) see the true secret of contentment—whether in circumstances of melting clothes, lack of heat, or ice cream shortage—the secret discovered and recorded by Paul in Philippians 4:

Not that I am speaking of being in need, for I have learned in whatever situation I am to be content. I know how to be brought low, and I know how to abound. In any and every circumstance, I have learned the secret of facing plenty and hunger, abundance and need. I can do all things through him who strengthens me.

How does recounting God's faithfulness help you battle anxiety? What are the stones in your past that remind you of His power to strengthen you?