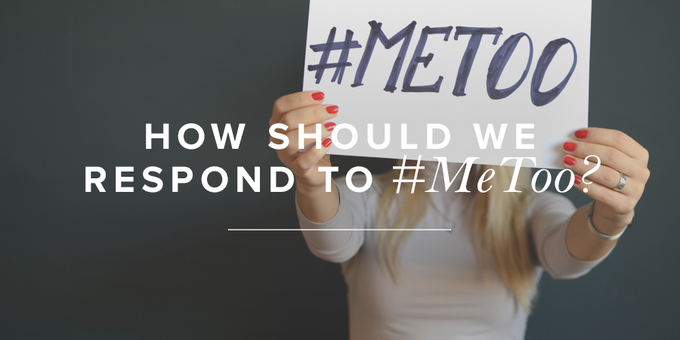 How Should We Respond to #MeToo?

In order of importance, I am a follower of Christ, a mother, and a women’s ministry leader. That means that I love the Word of God, the Bride of Christ, women, and future generations deep down in my gut. It also means that I have a responsibility to hold high the banner of truth in every sphere of influence God has graciously given me.

As the tidal wave of the #MeToo movement crashes through our culture, I know I can’t simply stay safe under my beach umbrella, waiting for it to pass. I can’t look the other way or, by my silence, encourage you to do the same. Since the megaphone of culture has been cranked up to deafening levels on the topics of gender roles, abuse, sexuality, and violence against women, we need to run (not walk) to God’s Word looking for truth.

This is not a post outlining what you should think about #MeToo. Instead, it’s a reminder that God’s Word has everything we need to think and respond righteously (2 Peter 1:3) and that spiritual discernment is a muscle that develops through training.

For though by this time you ought to be teachers, you need someone to teach you again the basic principles of the oracles of God. You need milk, not solid food, for everyone who lives on milk is unskilled in the word of righteousness, since he is a child. But solid food is for the mature, for those who have their powers of discernment trained by constant practice to distinguish good from evil (Heb. 5:12–14, emphasis mine).

God’s Word is the bar we must lift over and over and over again. The messages of #MeToo work like weights that we can use to train our spiritual muscles as we seek to understand the heart of God.

#MeToo is a global, grassroots movement, the stated mission of which is to help survivors of sexual violence find paths to healing. Made popular by the circulation of the corresponding hashtag though social media, organizers say that their desire is to create a community of advocates for both the victims of sexual violence and systemic change by “bringing vital conversations about sexual violence to the mainstream.”

From Hollywood awards shows to Twitter to church services, #MeToo has certainly generated buzz, but will it lead to change? And if so, what role, if any, is the Church and the individual Christian compelled to play?

Our first step needs to be to stop and pray. When we don’t know what to think about an issue or we want to hold what our culture says up to the light of God’s Truth, we have this promise to motivate us to hit our knees.

If any of you lacks wisdom, let him ask God, who gives generously to all without reproach, and it will be given him (James 1:5).

If you’re wondering how to respond to #MeToo (or any other cultural or personal issue), stop and pray. Ask the Lord for wisdom that transcends your feelings or the deluge of opinions coming through your social media feed.

From there, we can pivot to what we know for sure from God’s Word.

The Imago Dei Informs How We Approach All People

Nearly every issue that the culture is war dancing around is tied to the truth we find in Genesis 1:27:

So God created man in his own image, in the image of God he created him; male and female he created them.

Our Fight Is Not with Each Other

An undertone of the #MeToo movement that sends my spiritual antenna up is the message that men in general are monsters who have held the power too long. Offshoot messages like, “The future is female” imply that men have had their moment and botched it; the time for women to rise has come.

With our feet firmly planted in the truth that both men and women equally bear the image of God, God’s Word also appoints men as both the leaders of the Church and of our households. This is not a commentary on ability, for both men and women can lead, mold, and shape, but God has given us unique and complementary roles to play.

Any message that undermines the idea that men can and should lead or that communicates that the roles of service and support are somehow “less than” misses God’s brilliant design.

Are there men who abuse power? Absolutely! As there are women who do the same. Yet God’s design is for our flourishing. The future is the Lord’s. Period. And His future graciously includes both men and women.

God’s heart for justice is unmistakably declared throughout all of the Bible.

Who made heaven and earth, the sea, and all that is in them, who keeps faith forever; who executes justice for the oppressed, who gives food to the hungry.

The LORD sets the prisoners free; the LORD opens the eyes of the blind. The LORD lifts up those who are bowed down; the LORD loves the righteous.

The LORD watches over the sojourners; he upholds the widow and the fatherless, but the way of the wicked he brings to ruin.

When we cry out against violence and abuse, when we insist that wrongs are made right, when we refuse to stand for attacks against others, our hearts beat with God’s heart. In fact, it is one of the hallmarks of God’s people that we are to fight for the oppressed, as surely women who have been sexually abused, attacked, and mistreated are (Isa. 1:17; Mic. 6:8).

The question I am wrestling with personally, and inviting us to wrestle with collectively, is how do we fight? While hashtag activism is an effective tool for exposing a problem, it rarely works well as a solution. This violent surge of awareness to the forefront of public consciousness is surely a starting point, not the end-all-be-all.

While not an exhaustive list, here are some ways we can fight against abuse beyond clicking and posting.

#MeToo Reminds Us of How Widespread Our Depravity Is

As we use #MeToo as a metric to identify the victims of sexual abuse, the numbers are staggering.

Though these numbers are in constant flux, they illustrate an important point that sexual abuse is widespread, but that is just the headline. The real story is this: #MeToo reminds us of how widespread our depravity is. We’re marked by sin, and every single one of us has sinned against our fellow image-bearers and against the God who made us (Rom. 3:23).

This does not trivialize the impact of sexual sin on the victims; instead it places a white hot spotlight on the Truth, that we all desperately need a Savior. Sin should grieve us, but not shock us. #MeToo is an angry movement. I’m angry for the millions of women who have gaping wounds caused by sin. Attackers should never be granted a free pass, and yet this movement is ultimately a reminder who our real enemy is.

Since the first man and woman were formed by the loving hand of God, Satan has come at us, eager to destroy God’s image-bearers by convincing us that God’s ways are not best. #MeToo reminds me that the war on sin can only be won by Christ’s work on the cross. I am grateful all over again that my sin hangs there, as does the sin of victims and attackers alike.

Church, there’s no use glossing over it; we haven’t done well here. That is not a commentary on our God or our Bible but a reminder that on our best day we are a people group tied together by this two-threaded chord: our sin and our Savior.

And yet the Church is God’s Plan A to carry the message of hope and redemption to a lost and hurting world. There is no Plan B. Instead of guarding our reputation, we must create environments where sin is called sin and confession is heralded as an essential spiritual discipline.

James 5:16 reminds us, “Therefore, confess your sins to one another and pray for one another, that you may be healed. The prayer of a righteous person has great power as it is working.”

We need to be healed. Many are in need of individual healing from the wounds of abuse. And collectively, as the people of God and as a culture, we need healed hearts, healed minds, healed priorities, and healed systems. The formula God gives us for this in His Word feels so simple, we’re tempted to look for something more. And yet we’ve surely seen with our own eyes the power of dragging what is in the dark into the light by telling each other and then seeking the Lord together. Exposure of sin is ultimately grace, and we should celebrate it as such. As this response to #MeToo reminds us, “Silence is not spiritual.”

You have influence within your home. Are you using it to call out sin and create an environment of regular confession? What about within your Bible study groups and friendships with other Christians? Never underestimate the power of one person living a righteous life. Be willing to be the spark God uses to ignite the powder keg.

As followers of Christ, we are the guardians of true hope. We know there is nothing the Lord cannot restore (Deut. 30:1–3); that there is no sin, either individual or collective, that He cannot forgive (1 John 1:9); and that His love for us cannot be shaken (Jer. 31:3).

We also know that the storm of sin is temporary. A day is coming, it won’t be long now, when abuse will be banished from our midst forever, tears will dry, sin will stop, and the Church will be the radiant Bride she was made to be. While we work hard to live like Christ calls us to in this moment, we hold high the hope that this is not all there is. There isn’t a victim or perpetrator of abuse who doesn’t need to hear that.

As we wait for Him to make all things new, let us cry out like the prophet Habakkuk, “O LORD, how long shall I cry for help, and you will not hear? Or cry to you ‘Violence!’ and you will not save?” (1:2). Refusing to ignore the #MeToo tidal wave, let us embrace it, asking the Lord to use it as a force to send revival.

Previous Post What Did You Expect After Graduation?
Next Post Parents, Don’t Waste Your Lazy Summer Days
Store Donate Now My Account
Stay Informed via Email