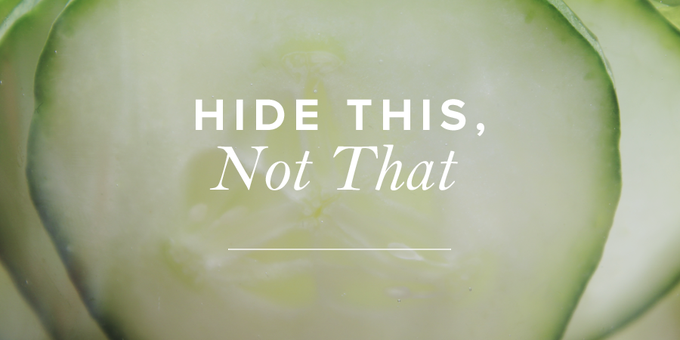 Hide This, Not That

Confessions of a Former Cucumber Hider, Volume 1. Yes, you read that right. I’m a cucumber hider. Let me explain.

I hate cucumbers, always have. The taste, the texture, the slimy seeds, the leathery skin, the whole nine yards. Unfortunately, for the better part of the 1980s (otherwise known as “my growing-up years”) my parents were on a diet-kick that involved eating salad with every meal. And when I say salad, I mean the same salad every day. Lettuce, tomatoes, cucumber, repeat.

Now, I also used to loathe tomatoes (cue the slimy, seedy, textur-y litany), and thankfully, I hated them to the point of gagging, so I was excused from eating them. But not the cucumbers. I had to eat the cucumbers. At every meal, there they would sit—exactly two slices, taunting me like a set of haughty, know-it-all eyes from their position atop a bed of iceberg lettuce, until I put them out of their misery in the only way I knew how. I ate them.

This went on for about a year, until one day I decided I would never eat another cucumber, not in my whole life. I was, at the time, an only child, and a very slow eater, so I realized that if I just took long enough eating my dinner, my parents would eventually get up in pursuit of doing dishes, watching the news, or the like. So I waited.

I ate the rest of my food slowly so as not to draw attention to those menacing eyes being passed from place to place on my plate like a Christmas fruitcake. I waited, until that blissful moment when I was alone in the dining room, and then in one soundless swoop I swiped those cukes off my plate and into the secret recesses of my napkin, never to be heard from again. Quickly finishing the rest of my dinner, I got up from the table, tossed my napkin and its contraband into the garbage, and never ate another cucumber the whole time I lived at home. And my parents? They didn’t find out until, as an adult, I confessed and repented of my cucumber sins.

The Messes We Hide

While I don’t hide cucumbers anymore (not saying I eat them, either), I must confess that my days of hiding are nowhere near done. I suppose my methods have just become a little more sophisticated. For instance, in my years as a married woman, I’ve become adept at hiding my messes. My gum-wrapper filled purse, my cluttered bedroom closet, and the cabinet in my hallway nearly overflowing with garments needing to be ironed all testify to the fact that instead of hiding cucumbers in the hopes of presenting a clean plate, I’ve taken to hiding messes in the hopes of presenting a version of myself that has it all together. Likely, you all know what’s coming . . . likely you’ve learned, as have I, that we can’t hide our messes for long.

Eventually, your toddler dumps out the contents of your purse on the church pew, revealing a mound of wrinkled Walmart receipts, gum wrappers, unused coupons, feminine products, and maybe even a grocery list from seven or eight months ago. (How did all that stuff fit in there?)

Eventually, your well-meaning father comes to visit for the weekend and wants to help with the basement bedroom project, resulting in a jaw-dropping moment as he scales Mount Clothes-That-Don’t-Fit-Anyone-Right-Now.

Eventually, you have to move, which requires preparing your home for showings. You may be seen driving your French-fry littered minivan around town carrying your six children, plus three baskets of dirty laundry and two that are clean but in need of folding. We won’t even discuss the mess under your bed, where, with the fervency of Susanna Wesley, you are praying the potential buyers don’t look.

If you have a family or friends who love you, if you have a community of believers who speak truth into your life, if you have a God whose very nature brings light to dark corners, know this: You can’t hide your messes for long.

Bring Your Darkness into the Light

So let’s stop trying, shall we? Let’s stop hiding and bring into His marvelous light (1 Peter 2:9):

In Genesis 37, Joseph’s brothers devised a shady plot for the purpose of personal gain at their brother’s expense and then attempted to ease their collective conscience by allowing him to live, while, they thought, disposing of the evidence of their sin. This worked for a few years, until in a moment of desperation, they found themselves bowing at the feet of the very “sin” of which they had tried to dispose. If we don’t expose our sin, eventually it will expose our heart.

Paul says in 2 Corinthians 12:5, “On my own behalf I will not boast, except of my weaknesses.” But who among us really does that? Most days, I feel like David, as though my sin, my weaknesses are ever before me! Why would I want to bring them to the light? Because as Paul reminds us just a few verses later . . .

But he said to me, “My grace is sufficient for you, for my power is made perfect in weakness.” Therefore I will boast all the more gladly of my weaknesses, so that the power of Christ may rest upon me (2 Cor. 12:9).

Our weaknesses are not a mess to be hidden, but an opportunity to bring glory to the One who died that we might be free from them.

Our need for help.

Tucked into the story of Jesus healing Jairus’ daughter, we find the account of the bleeding woman—you know, the one who attempted to hide herself from Jesus, just touching the hem of his garment (Luke 8:45–48)? This woman knew that she needed help, and she seemed to know that Jesus was the only one who could provide it. And yet she hid from Him, perhaps believing that her “uncleanness” would somehow diminish His ability to provide her the help she so desperately desired. Until her need was brought into the light:

And when the woman saw that she was not hidden, she came trembling, and falling down before him declared in the presence of all the people why she had touched him, and how she had been immediately healed (v. 47).

Sisters, acknowledging that we are sinful, weak, and in need of help opens up fields of opportunity to declare in the presence of everyone we encounter why we need Christ and how we have been healed by His grace.

If we can’t hide our messes—our sin, our weaknesses, our need for Christ, what can we hide? If you’re a recovering hider, like I am, try hiding these things instead:

His Word in your heart.

If you’ve been through Sunday school or Awana or any children’s ministry program, you’re probably very familiar with Psalm 119:11: “I have stored up your word in my heart, that I might not sin against you.” So how about instead of hiding our messes to conceal our sin, we instead hide Scripture to combat it?

For the word of God is living and active, sharper than any two-edged sword, piercing to the division of soul and of spirit, of joints and of marrow, and discerning the thoughts and intentions of the heart (Heb. 4:12).

Instead of spending time and energy attempting to hide from God, let’s instead focus on hiding in Him.

For he will hide me in his shelter; in the day of trouble; he will conceal me under the cover of his tent; he will lift me high upon a rock (Ps. 27:5).

Perhaps you’re like me, and you’ve been hiding things for far too long. Maybe it started with cucumbers, wrappers, and laundry, but gradually moved to things more serious—spiritual darkness, habitual sin, depression, anxiety, anger, hopelessness. Whatever it is, will you join me today in bringing that hidden darkness into the light? Stop hiding from Him; hide in Him instead.

This week, I came across the text of this old hymn by J. Hyatt Brewer. I pray that its message blesses those of you who are searching for a place to hide today:

Against the God that built the sky,
I fought with hands uplifted high;
Despised the mansions of his grace,
Too proud to seek a hiding place.

Enwrapt in dark Egyptian night,
And fond of darkness more that light,
Madly I ran the sinful race,
Secure without a hiding place.

But lo! the eternal council rang,
Almighty love arrests the man;
I felt the arrows of distress,
And found I had no hiding place!

Vindictive justice stood in view,
To Sinai's fiery mount I flew;
But justice cried with frowning face,
This mountain is no hiding place!

But lo! a heavenly voice I heard,
And mercy's angel soon appeared:
He lead me on a pleasing pace,
To Jesus Christ, my hiding place!

Should seven fold storms of vengeance roll,
And shake this globe from pole to pole:
No thunder-bolt shall daunt my face,
While Jesus is my hiding place!

On him almighty vengeance fell,
Which else had sunk a world to hell;
He bore it for his chosen race,
And thus became a hiding place!

Roll on, thou sun, in rapid haste,
And bring me to that constant feast,
Where mirthful songs of sovereign grace,
Are sung to him the hiding place.

Do you find yourself hiding from Him or in Him today? What verses could you hide in your heart as a beginning point for bringing light to your darkest corners?