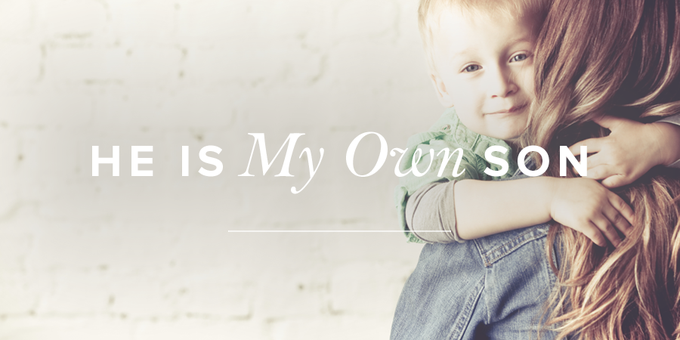 He Is My Own Son

Almost a decade ago, I was lying on my couch, sick with pneumonia, when my husband took a phone call that would change our lives forever. Through my medication-muddled brain, I could hear him say things like, “What time?” “What hospital are they at?” “Have they made a decision?”

When he hung up, I asked, “What was that about?”

He replied, “There’s a baby boy who was born today, and they want to know if we’re interested in adopting him!”

The Pull Toward Adoption

For someone who had struggled with infertility for many years, this was news I was longing for. Although I had surrendered to God my longing for children and knew I probably would never be pregnant, I still desired to embrace God's gift of children.

Even though we didn’t have children, my husband and I took the words in Deuteronomy 6:6–9 seriously. We loved on our nephews and wanted to be a godly influence on their lives, as well as that of our friends' children. We volunteered to teach Sunday school to a room full of three- and four-year-olds. These were ways we could have an influence on the next generation. But we also felt God's pull toward adoption.

So after four years of waiting from the time we first visited an adoption agency, we picked up our two-day-old son at a local hospital. While some couples may have a few months heads-up, we had less than forty-eight hours. But what an exciting forty-eight hours it was!

When we walked into that hospital room and my son was placed in my arms, I started to cry. I had such love for this little boy. No, he didn't grow in my womb, but he'd been growing in my heart for a long time. We chose to name him Jeremiah, after Jeremiah 1:5: "Before I formed you in the womb I knew you."

Grafted into the Family

I heard a speaker on a radio program once talk about adoption in terms of "grafted into our family." It’s an image I can relate to. When a branch of one tree is grafted onto another, it becomes part of that tree. Even though the branch and tree were originally from two different sources, they very quickly become united.

Even as he chose us in him before the foundation of the world, that we should be holy and blameless before him. In love he predestined us for adoption to himself as sons through Jesus Christ, according to the purpose of his will, to the praise of his glorious grace, with which he has blessed us in the Beloved (Eph. 1:4–6).

I also like how J.B. Phillips puts it in his translation of the New Testament:

For consider what he has done—before the foundation of the world he chose us to become, in Christ, his holy and blameless children living within his constant care. He planned, in his purpose of love, that we should be adopted as his own children through Jesus Christ—that we might learn to praise that glorious generosity of his which has made us welcome in the everlasting love he bears towards the Son.

However, not every aspect of adoption here on earth is "wonderful." Each party in adoption experiences some sort of grief along the way. Adoption at its core involves loss.

Separating biological families was not part of God's perfect plan. But the reality is that we live in a sinful world. Sometimes people make choices that have a negative effect on their children. Sometimes those parents don't choose to have their children taken from them and our government steps in. Other times the birthmother (and possibly the birth father as well) realize their choices are not the best for their children and choose to place them with a loving family who can give them what they cannot. And there are myriads of other scenarios, each of them involving sorrow. All of them involving pain.

The reality is that I am not my son’s first mother. He has another, and I try to do a good job of acknowledging that in his life. Although we originally had an open adoption plan, she has chosen to cut off contact with us at this time. But in the meantime, I can talk about her with my son, I can tell him how much she loved him and wanted the best for him, and we can pray for her together.

Most of the time I forget that Jeremiah is adopted. I want him to know this part of his story as he grows up, of course, but my heart doesn't distinguish him as an "adopted" child as opposed to a "biological" one. And I know that's how God looks at us, too.

A few years after Jeremiah came to our family, God gave my husband and I a wonderful, surprise gift of a biological daughter. During my pregnancy, I had one well-meaning person tell me, "Won't it be nice to have one of your own?" But that wasn’t the truth at all. Jeremiah is my own. He is my child, just as much as I am God's own child through salvation in His Son, Jesus Christ.

How does knowing that you are adopted into God's family impact the way you think about your salvation? How should that affect how we approach adoption as believers in today’s world—whether we adopt children ourselves or interact with families who have?

Why Adoption Is Worth Every Obstacle

What If I Can't Have Children?