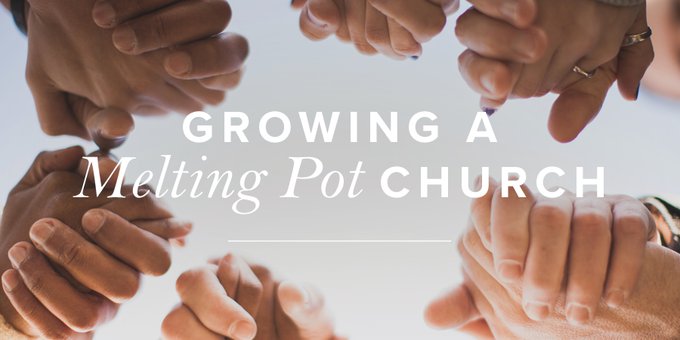 I grew up in a black neighborhood for the first seven years of my life. The only time I had ever seen a white person was on television shows like The Brady Bunch.

I remember the day my family moved into a new community. My siblings and I were exploring the backyard. Suddenly, we looked across the fence and saw three white children looking back at us. All of us were silent for what seemed like an hour looking at each other.

Then my oldest sister said, “That boy, he has blue eyes! Can you see out of those eyes?” Their mouths were opened in surprise as they looked at us, too. But as young children do, a second later we lost interest and continued to play.

Over the years, my neighborhood grew to include people from many different cultures. In those days, multicultural neighborhoods were called “melting pots.”

A Heavenly Perspective of the Church

Churches too are like melting pots. We are being built together as the Body of Christ (1 Peter 2:5).

Whether a church is multicultural or not, all churches undergo a burning away of sins and false beliefs. As the Spirit of Christ moves in and burns off the dross of His members (1 John 3:3), we are being conformed to His image (Rom. 8:29).

God created a variety of colorful threads among His people, but His ultimate goal is to weave them together into one glorious tapestry (Gal. 3:28), and His ways are higher than our ways (Isa. 55:7–8).

He forgives our sin with the mercy of a Savior who died for people from all over the world, so that whoever believes (John 3:16) will dwell together with Him some day in heaven (Rev. 21:2–3).

I looked, and behold, a great multitude that no one could number, from every nation, from all tribes and peoples and languages, standing before the throne and before the Lamb, clothed in white robes, with palm branches in their hands. (Rev. 7:9)

As we embrace people from different cultures in the Church, we put the love of Christ on display. This happens best when we start by seeking the Lord and His heavenly perspective.

But we often fail to embrace people who look different. Why?

Reasons We Fail to Embrace People Who Look Different

We allow fear and insecurity to cloud our thinking. We may fear being misunderstood by someone who is different or that they may prejudge us.

We have old prejudices about certain people groups. We may hold stereotypes about different cultural groups. We may have heard bad things that someone said about people from a certain culture and assumed that it is true.

Little children, let no one deceive you. Whoever practices righteousness is righteous, as he is righteous. . . . Everyone who hates his brother is a murderer, and you know that no murderer has eternal life abiding in him. (1 John 3:7, 15)

We make assumptions based on what we see. We may think that those who look different (e.g., clothing, hair styles, music, language, etc.) think differently from us.

If you pay attention to the one who wears the fine clothing and say, “You sit here in a good place,” while you say to the poor man, “You stand over there,” or, “Sit down at my feet,” have you not then made distinctions among yourselves and become judges with evil thoughts? (James 2:3–4)

We may be afraid to break a social norm. We may not choose to sit with people of a different culture since no one else seems to do so at church.

Do not be conformed to this world, but be transformed by the renewal of your mind, that by testing you may discern what is the will of God, what is good and acceptable and perfect. (Rom. 12:2)

We tend to associate with people we already know. Many people like to socialize with their family or friends rather than meet new people.

My brothers, show no partiality as you hold the faith in our Lord Jesus Christ, the Lord of glory. (James 2:1)

We may not fully trust God’s plans for reaching other people groups. We may be concerned that God will make us sacrifice to reach people outside of our cultural group.

“Go therefore and make disciples of all nations, baptizing them in the name of the Father and of the Son and of the Holy Spirit,teaching them to observe all that I have commanded you. And behold, I am with you always, to the end of the age.” (Matt. 28:19–20)

So, how can we instead embrace God’s vision for a melting-pot church like what we see in Revelation 7?

7 Ways to Embrace Different Cultures in the Church

1. Focus on what matters to God.

Ask God to help you see others with eyes of faith. Our first impression is to look at the outward appearance. Even God’s people wanted tall, handsome Saul to be king. But God chose David, a humble shepherd boy. God looks at the heart.

The Lord said to Samuel, “Do not look on his appearance or on the height of his stature, because I have rejected him. For the Lord sees not as man sees: man looks on the outward appearance, but the Lord looks on the heart.” (1 Sam. 16:7)

2. Pray to agree with God to view the universal Church as one Body in Christ.

We, though many, are one body in Christ, and individually members one of another. (Rom. 12:5)

3. Seek the Lord and ask him to show you if there is any area of sin in your heart that keeps you from reaching out to those who are culturally different.

Then pray and confess any sin God shows you that keeps you from fully embracing any church member who is culturally different than you.

If we confess our sins, he is faithful and just to forgive us our sins and to cleanse us from all unrighteousness. (1 John 1:9)

4. Seek God’s guidance found in His Word and from fellow Christians who are embracing different cultures.

There is wisdom in the counsel of many godly people. Pray for God to show you church leaders or members who easily embrace people, no matter what culture they are from, and seek their guidance.

By wise guidance you can wage your war, and in abundance of counselors there is victory. (Prov. 24:6)

5. Do not lose heart if there are differences among members from different cultures in your church.

Sanctification works through relationships, and Christ has already overcome the world. Persist in prayer and compassion when disagreements or conflicts arise between cultures, just as you would with a spouse or your children.

Put on then, as God’s chosen ones, holy and beloved, compassionate hearts, kindness, humility, meekness, and patience, bearing with one another and, if one has a complaint against another, forgiving each other; as the Lord has forgiven you, so you also must forgive. (Col. 3:12–13)

6. Focus on what you have in common first.

Celebrate Christ! It may not be necessary to hold activities in church to celebrate culture. The Church is thirsty for God’s Word, prayer, and fellowship.

And they devoted themselves to the apostles’ teaching and the fellowship, to the breaking of bread and the prayers. (Acts 2:42)

7. Remember that God is preparing us for the heavenly kingdom.

We are the Bride of Christ that is preparing for His return. All weddings have rehearsals that require unity among the wedding party. Let’s allow God’s Spirit to continue to work in us to make us a beautiful Bride for the coming Wedding Day with our King!

Then I saw a new heaven and a new earth, for the first heaven and the first earth had passed away, and the sea was no more. And I saw the holy city, new Jerusalem, coming down out of heaven from God, prepared as a bride adorned for her husband. And I heard a loud voice from the throne saying, “Behold, the dwelling place of God is with man. He will dwell with them, and they will be his people, and God himself will be with them as their God. (Rev. 21:1–3)

Editor’s Note: For more thoughtful insights, check out this interview Crystal did on her growing-up years in a multicultural neighborhood in the 1970s. It’s free to download!