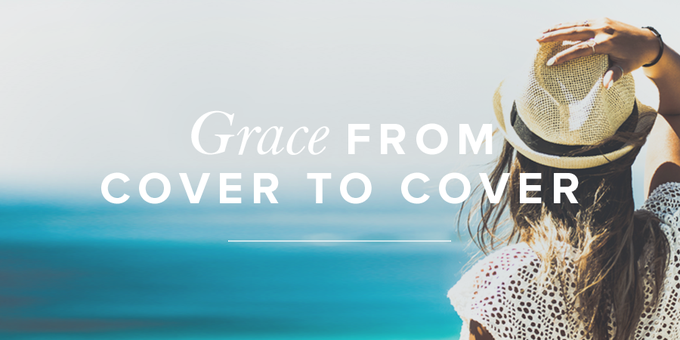 Grace from Cover to Cover

From our team: This month on the True Woman blog, we’ve been exploring the beauty of God’s grace. As Dawn shares, our God has always been gracious . . . read on and rest in the unchanging grace of the Lord toward His people.

In his book But for the Grace of God, Philip Hughes wrote, “Grace speaks of God’s initiative, of the priority of God’s action on behalf of us poor sinners. . . . Divine grace precedes all. That is the whole point of grace.”

To love God is to love grace. We find grace from cover to cover in His Word. Grace is always present because God is “the God of all grace” (1 Peter 5:10). He is “merciful and gracious . . . abounding in steadfast love and faithfulness” (Ex. 34:6). Grace is the essence of His being, and we find in Him an inexhaustible supply of good and gracious gifts.

I am not like God. My motives are tainted with selfishness. But God does not give to get anything in return. He is absolutely self-sufficient. He forgives offenders who deserve nothing but judgment. In His rich grace, sinners are not condemned because of the work of Jesus for and in us.

Grace from Eternity Past

A common misconception is that God wasn’t always gracious, but somehow the sacrifice of His Son transformed Him from a wrathful taskmaster into a gracious Father. This simply isn’t true. God didn’t suddenly change to grant grace.

Scripture reveals God was gracious before the world began. Paul said God’s people were saved and called by His purpose and grace in Christ “before the ages began” (2 Tim. 1:9)—before humans sinned. God planned to extend eternal life to His children before the beginning of time.

In due time, the Father sent His Son to be the Redeemer, an act of grace designed to make alive in Christ those who were dead in sin. Spiritually-dead people could never meet God’s conditions, but God is “rich in mercy” and love; and He made a way for sinners to come to Him (John 14:6; Acts 4:12).

Grace for the Old Testament Saints

Expressions of God’s grace in the Old Testament were meant to point mankind to the mystery of the ultimate grace of God in Christ.

I used to think Adam and Eve were the starting point for God’s gracious work. But I believe God’s act of creation was in itself all of grace. He didn’t need to make anything or anyone. He has no “needs.” He simply wanted to create and love. But His grace was working before all time, knowing people would reject His love and go their own way. He would need to send a Savior.

But we see the first promise of grace to Adam and Eve. God could have killed them on the spot for disobedience. Instead, He promised a “seed” who would someday triumph over sin; but in the meantime, the Lord provided a way for humanity to be right with Him. He sacrificed an animal to make coverings for Adam and Eve—a pattern that continued throughout the Old Testament as a reminder: Only the blood of a suffering substitute can atone for sin.

Then Noah “found favor in the eyes of the LORD” (Gen. 6:8). In the midst of a culture saturated with sin and deserving judgment, Noah received undeserved grace. Though a sinner, he came to God in faith, and the Father imputed righteousness to him. This grace was extended to those who survived God’s catastrophic judgment in the flood. God’s grace preserved the “seed” of the coming Messiah.

The story of God’s grace was woven through Old Testament history.

We find grace in the Old Testament rituals of the Passover, the redemption of the firstborn, the sacrifices, the Day of Atonement, and the holy priesthood. These rituals were established to express God’s grace and the outflowing of His love, mercy, and forgiveness in the midst of well-deserved judgment. These rituals were later corrupted when people turned them into means to “win favor” with God.

I was surprised to find God’s grace in Old Testament Law. The Jews were never saved by keeping the Law; they were only justified by grace through faith.

So why the Law?

The Law served as a schoolmaster, a guardian-tutor, to bring people to Christ so they could be justified by faith. Abraham was saved by faith, more than 400 years before the Law was given. David was likewise saved by faith alone.

Old Testament saints looked forward by faith to the “Good News” of the Messiah’s coming, and New Testament saints and all who follow Christ today look back to His coming and believe the gospel.

Some people say the Old Testament is about law and the New Testament is about grace (quoting John 1:17), but the truth is that law and grace are at work in both testaments. The function of the Law points to salvation, but it always pictures God’s grace as well. And believers are never to use grace as an excuse to pursue a lawlessness lifestyle.

How the Law Demonstrates Grace

So how does the Law show God’s grace to His children?

The Law helps us understand more about who God is. We can understand from Leviticus 19:2 that God is holy and requires us to be holy. We discover God wants us to live in light of His holiness. In the New Testament we learn Christ came to perfectly fulfill the requirements of the Law in our place.

The required sacrifices help us understand our need for a high priest—a representative mediator. The New Testament reveals Jesus is that holy High Priest and Mediator at the “throne of grace.”

Rather than given to intimidate us, the Law is actually a gracious gift from God to motivate us to seek and cry out to Him. We are convicted of sin and realize how desperately we need a Savior.

Author Tim Keller writes, “If you listen at all to the law of God, you will feel naked and exposed, ashamed and helpless, and you will seek out the mercy of God. That is why Paul says that though the law, when listened to, is devastating, it is nevertheless ‘spiritual, righteous and good,’ and its work is ultimately gracious.”

The Law teaches us to heed and obey God because He is God—the ultimate Authority—and we are not. Our Father knows what is best. The prophet Jeremiah said God would write the essence of His Law—love for Him and for our “neighbors”—on our hearts (Jer. 31:33).

Christ-followers are set free from sin and death, not to be lawless but to obey the “law of the Spirit” (Rom. 8:2). We are not free to be a law unto ourselves, living with license or perverting the grace of God, but are to surrender to God’s authority so we can live under the 0.God-honoring Law of Christ.

Grace in the Gospel

It is the gospel of grace that continues to change lives today as believers trust and follow the glorious Savior who is “full of grace and truth” (John 1:14).

The powerful message of the gospel is often used as a synonym for grace. “The grace of God has appeared” to us in Christ’s salvation, instructing us to live godly lives after we trust in Him. The biblical order is always that we are rescued by grace, not works (Titus 2:11; Eph. 2:8–9).

To understand the magnitude of God’s grace in the gospel, we need to grasp the depths of our sinfulness. We cannot earn His favor. We are desperately wicked and can never measure up to God’s righteous standard.

God’s grace that saves us will keep us saved in Christ throughout eternity. He has extended such incredible grace toward us, and our gratitude will be in full bloom in eternity. The One who is able to save us “to the uttermost”—once and forever—makes intercession for us. He is our great High Priest and Advocate forever.

How has God shown you grace and mercy today? Be specific and take time to thank and praise Him!

Grace Calls for a Response