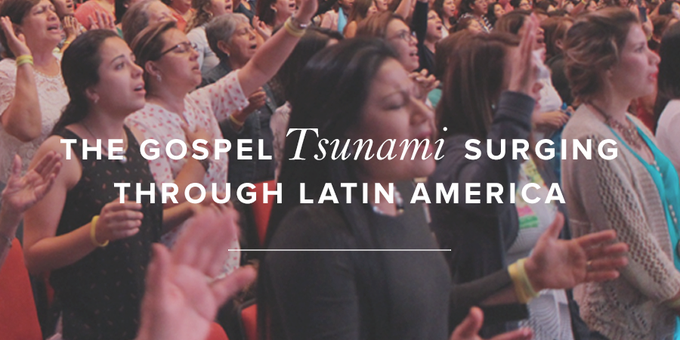 The washing machine hums as I keep filling it, and soon the smells of the streets of Querétaro, Mexico, will be replaced with Gain (original scent). The smell of this country is washing away, but the love for the women I met at Mujer Verdadera ’17 is planted deep in my heart. And I’m trusting that the work God did there will remain, grow, and flourish!

There are few experiences that come close to reaching heavenly proportions, but praising God together with thousands of women from Latin America—several languages in one voice—transports me into that unseen realm. More than 4,500 women from cities all across Mexico and twenty-two countries came together in one place, to sit under God’s Word and worship Him in song. Many of these women had never heard the gospel or attended any type of evangelical event like this, but the believers were belting out praise loud and clear.

How Did It All Start?

Aviva Nuestros Corazones, the Spanish ministry of Revive Our Hearts, was birthed in January 2011 with a burning desire to take the message of revival and biblical womanhood to Santo Domingo, Dominican Republic. (Read about how it all started here.) But it has reached far beyond those early dreams. Laura González de Chávez, director of ANC, describes the faith-explosion:

It was a project of faith from the very beginning. Seven years later, God has proven Himself faithful and has rewarded our faith in ways beyond our asking or imagining. I can’t help but remember my husband’s words when Revive Our Hearts launched Aviva Nuestros Corazones. He said that this was going to be a tsunami. We have seen that wave gaining momentum right before our eyes!

In 2013, Aviva Nuestros Corazones was officially launched with five radio programs a week and a website. God has expanded its reach in unforeseen ways. In February 2015, we held the first Mujer Verdadera (True Woman) conference in Santo Domingo. The ripple effect of this conference was amazing. God took our few fish and loaves and multiplied them. He was calling women to Himself and doing a work of revival in the hearts of Spanish-speaking women all around the world.

God is on the move. He is taking the message of gospel freedom and biblical womanhood across Latin America, and this past week I was privileged to watch it happen in the city of Querétaro.

Laura describes the spiritual need there:

This city is known among evangelicals as being impenetrable for the gospel; they call it the “dark area of Mexico,” as the gospel has reached other regions in the country, but this one not as easily. There is one specific strip called “the alley of silence,” because there are no churches in this part of the city. The region is also known for the large number of single mothers, and high alcoholism rates and addictions are prevalent among women. Moreover, until recently it was a region known for satanic cults.

Querétaro is a prosperous, thriving city, strategically located two-and-a-half hours northeast of Mexico City. There are a few churches in the area that God is using in united efforts to bring sound doctrine to the city. During our visit in 2014, the Lord gave us the opportunity to share with them the vision of ANC and of a future conference in Querétaro. They were open and willing to help. We were encouraged that God was indeed moving powerfully in Querétaro.

The church leaders expressed that Mexico was in the early stages of a revival. In God’s providence, Querétaro was the place where the movement for Mexico’s independence begun, and they prayed that revival would be birthed in this city as well.

God directed us every step of the way, and now the dream has come true. Mujer Verdadera ’15 officially ignited the movement, and we hope that Mujer Verdadera ’17 will expand and accelerate it . . . 'until all the earth is filled with the knowledge of the glory of the Lord, as the waters cover the sea' (Hab. 2:14).

A pastor from Querétaro told me that for hundreds of years this city has been oppressed under dark (and demonic) strongholds. Querétaro is only 0.25 percent evangelical and is a part of “The Rosary Belt Region,” which is often called the 10/40 window of the Americas by Latino Evangelicals. The gospel didn’t reach Querétaro until 1970, when an American missionary dropped thousands of gospel tracts over the area from a plane. That missionary later came to live among the people and endured beatings and persecution as he shared the gospel.

It has remained an extremely difficult area to evangelize, but we saw God breaking through that darkness during the conference.

Women came from all around the world for this event, all the way from Germany, France, Spain, Colombia, Dominican Republic, Guatemala, United States, Argentina, Costa Rica, Honduras, Puerto Rico, Peru, Canada, Venezuela, El Salvador, Panama, Bolivia, Nicaragua, Ecuador, Chile, Cuba, and of course, from all over Mexico. We even had a couple of attendees from Korea!

Women also joined via livestream from different locations around the world. We estimate that approximately 22,000 women watched the conference online, as many churches hosted groups and others met in homes.

Although most of the messages were delivered through interpreters, the women attending the conference were visibly engaged and impacted by the messages from Dannah Gresh, Mary Kassian, Dámaris Carbaugh, Pastor Carlos Contreras, and Nancy DeMoss Wolgemuth. As they shared Christ-exalting messages and encouraged women to seek Christ, the response was incredible. Hundreds of women made their way through crowded rows of seats to kneel at the front when speakers invited them to repentance and prayer. You could hear them sobbing as volunteers prayed over them, and they literally wet the concrete floors of the conference center with their tears.

Volunteers who served in the prayer room didn’t get the typical “American conference” prayer requests. They reported story after story of women who had experienced the loss of family members to kidnappings, drugs, murders, and prison. They carried the pictures of their lost loved ones with them, asking for prayer for the return of those kidnapped or prayer to let go of their bitterness and hatred of the kidnappers. One of the volunteers told me that she is a scientist in the field of neurology and witnessed physical changes in women as they were released from years of bondage. She kept stating that it was beyond science, that the work of God she witnessed was supernatural. Women were set free from resentments and unforgiveness. One woman was even able to forgive the person who murdered her parents.

Most importantly, many women who’d never heard the gospel came to salvation in Christ.

One young pastor from the area shared that two years ago his church launched a twenty-four hour prayer vigil, asking God to bring a spiritual movement of awakening and revival to their area. Their church helped in the effort to host Mujer Verdadera ’17. This pastor, and many others I spoke with, said they believe this conference is the beginning of the revival they’ve been praying for!

If you were involved in the prayer effort for Mujer Verdadera ’17, gave financially, or served in any capacity, you can rejoice in the fruit your labors produced in the fields of Querétaro. Please continue to pray for the women of Latin America and the ministry of Aviva Nuestros Corazones.

God’s heart is for the nations, and His eternal gospel is the message He commissions us to take across this globe!

“Great and amazing are your deeds, O Lord God the Almighty! Just and true are your ways, O King of the nations! Who will not fear, O Lord, and glorify your name? For you alone are holy. All nations will come and worship you, for your righteous acts have been revealed” (Rev. 15:3–4).

Will you join us in praying for the women of Latin America?

Feel free to leave a prayer for them in the comments below.

PS: To experience some of this conference for yourself, watch this video: