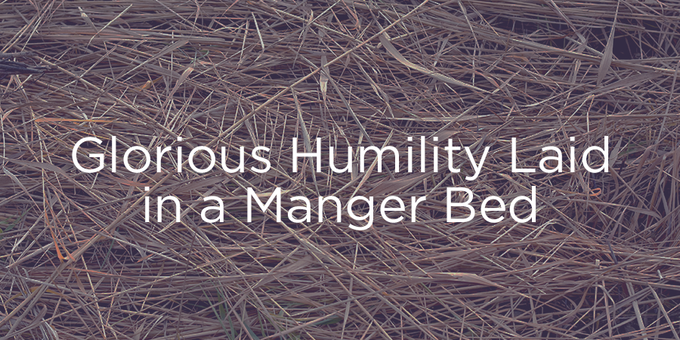 We're all pretty glory-hungry. We care deeply about what others think of us, or at least what the right people think of us. We want to be important, special, gifted, spiritual, unique, mature, wise, wealthy, popular, successful, and well-liked. We want to be made much of, to be glorified. Some of us might not want a ton of glory, only enough to make us feel better than the next person. Either way, we have a glory-seeking problem.

And into that glory-seeking world came a glory-forsaking God.

And [Mary] gave birth to her firstborn son and wrapped him in swaddling cloths and laid him in a manger, because there was no place for them in the inn.

And in the same region there were shepherds out in the field, keeping watch over their flock by night. And an angel of the Lord appeared to them, and the glory of the Lord shone around them, and they were filled with great fear. And the angel said to them, "Fear not, for behold, I bring you good news of great joy that will be for all the people. For unto you is born this day in the city of David a Savior, who is Christ the Lord. And this will be a sign for you: you will find a baby wrapped in swaddling cloths and lying in a manger." And suddenly there was with the angel a multitude of the heavenly host praising God and saying,

"Glory to God in the highest, and on earth peace among those with whom he is pleased" (Luke 2:7-14).

The joy of heaven is exposed as praise overflows to the shepherds that night. What is so delightful, so thrilling about the moment Jesus gave up His glory? And why do we often not share in the angels' exuberance over Jesus' birth? Though we know this is an important day for our faith, His birth is often seen as a stepping stone to the greater, more important things that Jesus did: His ministry, His death and resurrection. But none of those moments garner such a heavenly declaration.

So what is so praiseworthy about the baby lying in the manger?

Often, we aren't thrilled by the birth of Jesus because we don't understand why He came as a baby. Wouldn't it have been more efficient if He descended to earth at thirty years old to do his ministry and then pay for our sins on the cross? If His death and resurrection were all He came to do, why arrive as a baby and spend thirty years doing menial stuff?

Because our greatest need wasn't just to have our sins paid for. Imagine you are seeking entrace into a special organization. The cost of the membership is $1 million. The problem is you don't have a $1 million. Not only that, you currently have a debt of $1 million! Of course you need your debt paid, but being at zero still doesn't buy your entrance. You need a positive amount of $1 million. In the same way, salvation doesn't just require the absence of sin, but the presence of perfection. Jesus told us "unless your righteousness exceeds that of the scribes and Pharisees, you will never enter the kingdom of heaven" (Matt. 5:20).

Jesus, the only person who ought not be humble, humbled Himself as a servant to a thankless and prideful mankind.

Jesus came as an infant to earn that righteousness for us. A pure, flawless righteousness without one spot or wrinkle. He was made like us in all things (Heb. 2:17): in infancy, in childhood, in adolescence and in adulthood, in sickness and health, in joy and sorrow, in affliction and suffering, in the menial and significant. He was tempted in all things as we are, yet without sin (Heb. 4:15). Jesus lived a perfect life, from birth to death, so that we might be clothed in Him, the One who has become our righteousness before God (Gal. 3:27; 1 Cor. 1:30).

That Infant lying in the manger is the only reason we can be saved. He wasn't just coming to remove our sin, but to earn our righteousness. Through His obedience we are made righteous (Rom. 5:19).

I recently raised my voice at my daughters. After a full day of caring for them, making lunches, doing bathroom breaks, cleaning up crafts, and listening to their more-than-usual amount of complaints, I was getting angry. Deciding to do the "right thing," I got down on their level to apologize. Just before the words escaped my mouth, my oldest daughter condescendingly asked, "Mommy, are you going to apologize to us right now? Because you weren't very nice to us."

I struggled to hold in the wave of angry inner-dialogue: Excu-u-use me?! I'm not nice to you?! I do everything for you! All day long! And all you do is complain and fight with each other. Now just because I got a little upset, you think I'm the one who's wrong?! Humility is unnatural to us, especially when directed toward those we deem "less mature" than ourselves.

But Jesus did not consider His deity a thing to be asserted over us, but rather emptied Himself, choosing to come as a servant in our likeness, choosing to come as a baby (Phil. 2:6–7). The profound significance of this cannot be felt without remembering who this God-Man is. The Bible tells us Jesus is the image of the invisible God, by whom and for whom all things were created, the radiance of God's glory and the One who upholds all things by the word of His power (Col. 1:15–17, Heb. 1:3, John 1:1–5). Consider the mind-blowing implications of this in His birth:

John 1:10–11 says, "He was in the world, and the world was made through Him, yet the world did not know him. He came to his own, and his own people did not receive him." Jesus could have shouted like I did: "I do everything for you! I hold your atoms together! Because of My conscious choosing, you are alive right now. All you do is complain, grumble, and seek your own way. And now when I come to help you, you reject Me." But He didn't. Consider it again: He didn't.

Jesus, the only person who ought not be humble, humbled Himself as a servant to a thankless and prideful mankind. Hallelujah! Glory in the highest! For we serve a God who dwells in a high and holy place and also with the contrite and lowly of spirit (Isa. 57:15)! Our God gave up His exalted place in heaven to humbly dwell with sinful man! It is God's humility that makes Him supremely glorious.

May the humble Jesus, the only righteous One be greatly exalted this Christmas season! Let us join the heavenly chorus and celebrate our glorious God. Glory in the highest! For our God has come to save the sinners and to reveal Himself to the lowly.

Mild He lays His glory by
Born that man no more may die
Born to raise the sons of earth
Born to give them second birth
Hark! The herald angels sing
Glory to the newborn King!