Dannah Gresh returns to the blog to talk about the lies girls believe and the Truth that sets them free. Psst . . . did you know that there’s now a book by that title? That Dannah wrote? (Cue a happy dance!) You can find it in our store today! We hope this book and today’s post will help you teach Truth (and bring True Hope) to the next generation. —Hayley Mullins, True Woman Blog Manager

When Nancy DeMoss Wolgemuth penned Lies Women Believe in 2001, it was plausible to her that she might bring the same message of Truth to teenage girls. As quickly as the book hit the shelves, women were writing to tell her that many of the lies they believed seemed to be rooted in their teen years. That’s how I got into the picture of the Lies We Believe book series. She invited me to write Lies Young Women Believe with her.

While I was working on that book, it didn’t occur to me that we would need to write a version of this book to help younger girls overcome lies. Back then, tweens—those aged eight to twelve—weren’t on the front lines of the battle like teens were. They weren’t manifesting the telltale consequences of believing lies like adult women were.

Nancy and I could not have imagined that the words used to describe a large percentage of adult Christian women—insecure, depressed, lonely, confused—would apply all too readily to the littlest of women just ten years later. But so much has happened. And to talk about it with clarity, I wanted to talk to moms on the front lines of the battle who were raising girls between the ages of eight to twelve. So I hit the road and stopped in several U.S. cities to conduct focus groups with women who know just how to describe today’s girls. According to them, these four "grown-up" words all-too-often describe the way girls feel.

Moms said that, like themselves, their tween girls were insecure. Insecurity strikes at the hearts of girls at younger and younger ages, especially in the area of beauty and body image, since the culture preys upon women in this area.

Consider the fact that when Marilyn Monroe was at the height of her sex symbol status, she was nearly thirty and her image was being used to peddle beauty products to adult women. Purveyors soon broadened the audience to include teens in their buying demographic by creating younger beauty icons. Within just the last ten years, we’ve seen beauty icons as young as thirteen rise to celebrity power. Their images are used to tell your daughter that she needs everything from lip gloss to padded bikini bras.

Girls—armed with their mom’s credit cards—quickly turn toward artificial expressions of beauty and consumerism in a quest to feel more secure, creating a $200 billion worldwide industry for the “tween.” For example, eyeliner and mascara sales for eight- to twelve-year-old girls doubled in 2010. Doubled! Should there be anything to double? What little girl is in need of eyeliner to begin with?

Makeup to mask the insecurity isn’t so bad when you look at the small minority that fall into more harmful ways of hiding their insecurity. Insecurity concerning their bodies will take them to great lengths, often leading to harmful eating habits.

“A decade ago, new eating disorder patients at Children’s National Medical Center tended to be around age fifteen,” says Adelaide Robb, director of inpatient psychiatry. “Today kids come in as young as five and six.”

Of course, the opposite can be true, too. Overeating can be as harmful as under-eating. Some girls will succumb to the ads of fast-food marketers and cupcake franchises to soothe their insecurity. Childhood obesity is growing at an alarming rate. Unfortunately, the choice the overeater makes to soothe her insecurity only adds to it.

Moms also told me that a lot of their girls were struggling with anxiety. Ironically, buying a girl anything she wants (a.k.a. feeding her self-entitlement so she will have self-esteem) doesn’t make her happier. It tends to leave her depressed and more anxious about how she compares to others.

Author Juliet Schor, who studied the impact of today’s consumer-focused culture on childhood says, “Today’s average (that is, normal) young person between the ages of nine and seventeen scores as high on anxiety scales as children who were admitted to clinics for psychological disorders in 1957.” Sadly, this impact has long-term results.

And anxiety is just the tip of the iceberg when it comes to the long-term ramifications of the new consumerism. Social science offers us a statistical footprint for how a little girl will turn out based on what she’s exposed to and when. A two-year study by the American Psychological Association task force on the sexualization of girls offers clear evidence that a mother’s “hunch” that she shouldn’t let her nine-year-old run around in a mini-skirt and go brand crazy is more than a hunch.

The task force’s report states that music lyrics, Internet content, video games, and clothing now being marketed to younger and younger girls, pressuring them to grow up too fast—while creating no apparent immediate effect—is clearly linked to eating disorders, low self-esteem, depression, and early sexual debut when these girls become teenagers. Those teen years impress so many body image issues and scars from sexual relationships onto their hearts that by the time they are married they cannot fully enjoy the gift that God created for them to know.

The ramifications are significant in terms of her future marriage and family.

Many moms mentioned how confused their daughters felt in terms of gender, marriage, and family. In fact, the subject that lobbied for a significant amount of time in conversations I had with mothers was homosexuality. Moms want to know how to address it biblically, given the fact that their daughters are exposed at younger and younger ages through “the neighbor across the street,” “her uncle who is married to a man,” and “her best friend at school who has two mothers.”

Very few moms of the last generation had to face the question of whether or not to let their little girl visit the home of another little girl who has two moms. And homosexuality is just the tip of the iceberg when it comes to gender confusion. As we began this project, Facebook had fifty-six gender options to choose from, but before we had our first draft complete they simply changed it to male, female, or “fill in the blank.” This is presumably because they could not keep up with the evolution of the new sexual revolution in which transgender is just one of dozens of options.

“The level of deception my daughter has stooped to in order to avoid submission has dumbfounded her dad and I,” said one mom in our focus groups. “She decided to stop doing her homework in second grade, but continued to get A’s and B’s on all the tests and quizzes. On national tests, she was testing in the 97th percentile. Teachers began to send notes home concerning her lack of obedience and submission, but she threw them away in second grade! For two years, I have had to meet with teachers at the beginning of the school year to explain my daughter’s deception and give the teachers my cell phone number so they can call me directly if she doesn’t hand in homework or is disobedient or disrespectful.”

She wasn’t alone. So many moms—with daughters in public, Christian, or homeschool environments—stated their concern that their daughter was comfortable with lying and often acted in disobedience or rebellion. And it might be worse than they know. Seventy-six percent of mothers said their daughter struggled to obey, but when we asked the girls, 97 percent of them admitted they did.

I could go on with words that neither of us want to apply to any little girl—lonely, exhausted, angry, fearful! Maybe what I’ve just shared with you gives you a taste of the danger, but it’s just the tip of the iceberg.

An Iceberg to Avoid

Here's how I see the situation: Your daughter’s life—and yours—are like ships out on the ocean. You’ll see many icebergs of untruth out there and need to make decided efforts to avoid them . . . or collide and suffer the consequences. Many of those icebergs won’t look so big, bad, and scary. The tip of the iceberg is often very unassuming, as are so many of the cultural lies that your daughter is facing today. But without decisive action, the results could be grave.

On April 15, 1912, the chief steward of the great ship Prinz Adalbert snapped a photograph of an unimpressive iceberg. Compared to most, it was small and didn’t even come up to the bridge of the ship. Nor did it make a great photograph, because it was a “blackberg,” meaning that it looked clear rather than white due to continuous melting. Though it had on it a telltale smear of red paint along its base, indicating that it had collided with a ship in the previous twelve hours, the steward knew of no collision reports.

However, earlier that morning, the RMS Titanic had settled under the ocean surface just a few miles to the north, taking with it over 1,500 lives. Someone failed to make a decisive decision on the Titanic. But those on the Prinz Adalbert did. And they survived.

What if I told you that instead of being insecure, anxious, confused, and deceptive that your daughter could grow up to be confident, peaceful, and truthful?

This is how God intended her—and you—to live. In the book of John, Jesus is recorded as having said this hopeful Truth:

As you look at your daughter’s life—and yours—can you say you are both experiencing the abundant life that Jesus came to give you? Are you both on a course to experience it in the future?

You have a decision to make. 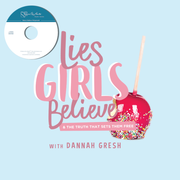