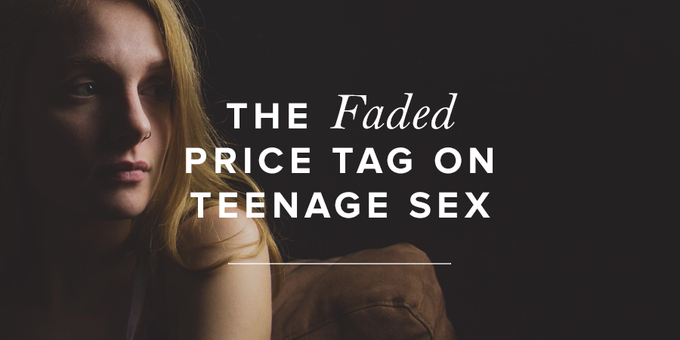 From our team: This month on the blog, we’re continuing our theme of seeking God together by taking a look at holiness. Shannon Popkin has been thinking about this topic, and the Lord brought her face-to-face with the “sticker shock” of living with holiness in an unholy world . . . while shopping with her daughter. Read on to hear her story.

I knew what to expect, because I’ve shopped here before. But I didn’t expect for God to break my heart.

I was probably looking my age, over in the clearance section, as I held up various sweatshirts and tops and and turned the price tags (which are stamped in faint red ink that is even harder to read) at various angles, hoping to find a stray beam of light. I found a nicely priced T-shirt and began calling (yelling) to my daughter a couple of racks over and waving the price tag in the air. That’s when I almost tripped over the baby.

This store is clearly not set up for strollers. The racks are really close together and it’s so dark, a baby could easily get trampled in the chaos. But nevertheless, a stroller was there, and I—the squinting, yelling, out-of-place, middle-aged mom—had just jostled it and upset the baby.

I felt terrible and tried—loudly but sweetly—to offer an apology. The teenage mom did not look pleased. She gave me a weak smile, then leaned down to pick up the adorable little infant, who was now puckering up her lip and starting to cry. The baby girl couldn’t have been more than a few weeks old and was obviously no more pleased than I with the blaring music in this store.

Just then, a teenage boy approached with his arms full of hangers and clothes. The baby’s dad, I thought. The girl, who was bouncing the baby and trying to get her to stop crying, said something in the boy’s ear and pointed over toward the fitting room. He rolled his eyes, flopped his armful of jeans and sweaters onto the stroller, and reached for the baby.

I seriously doubted that anyone was enjoying this family outing.

My heart ached for them. I wanted to reach for the baby and take her somewhere quiet, peaceful, and bright where I could softly sing her back to sleep. I wanted to hug the new mama and whisper a prayer of hope into her ear. And I wanted to put my arm around this new father and give him a bit of guidance on what shepherding a family looks like.

I turned back to my daughter and helped her dig through the racks. As I waited for her outside the dressing room, and then in the line that inched toward the cash registers, I kept an eye on the two teens with their new baby, over in the corner of the store.

A customer ahead of us turned from the checkout counter with a huge, bulging shopping bag, which caught my eye. The bag served as a moving billboard, featuring both the store’s name in giant print and a life-sized photo of a shirtless male model.

As the bag bobbed toward the stroller, I noticed something. The model on the bag looked remarkably like the teenage father. Both boys were about seventeen and handsome. They had similar haircuts and the same trim, muscular build. But there was one notable difference. The boy in the store was wearing a shirt and holding a baby.

That model, that bag, and that store were all strategically designed to sell clothes. But there was something else being sold here, too. And the two teens holding the baby had bought the whole package—the clothes, the trendy image, and the sex.

Now, please don’t misunderstand. I wasn’t critical of this pair for having their baby or even for bringing her in the store. Quite the opposite, actually. In that short time I had been looking on and wondering about their back story, I had grown to admire these brave teens.

I wanted to rejoice with them over their noble decision to bring a daughter into the world. I wanted to praise them for honoring her worth as a human being, created in God’s image. And I wanted to celebrate their refusal to listen to the world and use abortion to snuff out her life.

Our teens are growing up in a world that sells sex, independence, and self-exaltation. Any talk of honor, noble sacrifice, or laying your life down for another is drowned out by angry protesters, demanding their rights and autonomy.

It is uphill and counterintuitive to deny yourself and follow Christ in a world that equates serving others with injustice. It’s always hard to lay your life down and lift others up, but especially so when the crowd is sneering at your selflessness.

We all agree that God’s narrow path for relationships and sexuality is costly. But the world—looking over our shoulders at the price tag on purity—experiences slack-jaw sticker shock! So when a godly teenage girl with a beautiful body skips the rack of trendy, revealing clothing, the world says she’s eyerollingly foolish. When a Jesus-following boy sets a “no-girls-alone-in-my-car” rule, the world thinks he is outlandishly narrow-minded.

But here’s the irony. You can’t have sticker shock toward purity without cheapening sexuality. You can’t sneer at modesty and boundaries that flow from a heart to honor God without also devaluing what they’re intended to protect.

The world displays teenage sex like a “must have” summer line displayed on window mannequins—to be worn immediately and tossed aside as soon as the weather changes. In contrast, God displays teenage sexuality like a diamond ring behind locked glass. It’s valuable and anything but disposable. When a teen devalues sex and refuses to respect its worth, he or she only cheats themselves.

Let’s Turn Up the Lights

Trying to sort out teenage sexuality from within today’s teen culture is like reading faded price tags in a darkened room with the music blaring. As Christian women who love Jesus and love our kids, let’s turn up the lights and turn down the noise.

Instead of shrugging or sighing when the topic of sexuality comes up, let’s make ourselves available. Instead of frowning or scoffing, let’s have conversations about truth. Let’s lead small groups and mentor teens with passion and be willing to expose lies. Let’s pull back the curtains and expose the deceiver who steals, kills, and destroys. And let’s lead kids to Jesus, who offers rich and satisfying life (John 10:10).

From our team: If you want more resources on how to do this practically, we wholeheartedly recommend our friend Dannah Gresh’s ministry, Pure Freedom. Their website has blog posts, books, events, and more—all designed to help you (and your children) discover and celebrate God’s design for sexuality.

Girls and Sexuality: Don't Get Discouraged, Do Keep Talking