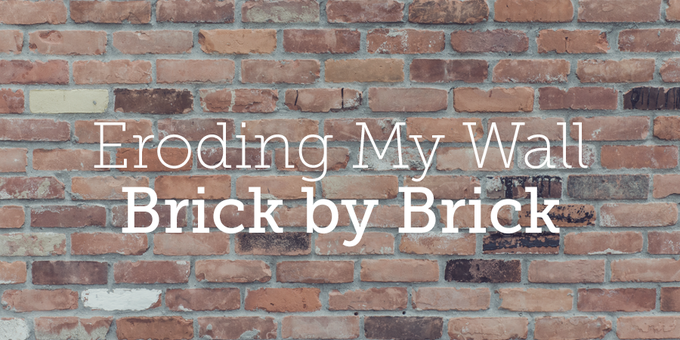 Eroding My Wall Brick by Brick

I go to a big church made up of a bunch of small groups. I have a weird relationship with my small group. I love them. I rely on them. But sometimes, I find it hard to really talk to them. Maybe you know what I mean.

It’s inevitably my turn to talk, and I never know what to say. The weirdest part is that I’m usually a person without a loss for words. I’m honestly not sure what brings on this brain freeze but it drives me crazy.

It happened to me again this week. The things I wanted to say wouldn’t come out, and the things I didn’t intend to say came pouring out of my mouth. As I drove home, I thought of all the things I might have said. So I wrote this letter to my small group.

I know I’ve been acting weird lately. I’m really sorry about it. By the looks of it, I’m sure it seems as if I’ve become detached and uninterested. That couldn’t be farther from the truth. The truth is that I’m scared.

I didn’t notice it at first. It wasn’t very high, and I could see over the edge. But after a couple of years of laying bricks, I realized that it was harder to really see without standing on my tippy toes. By then the wall was so high and so strong that it seemed easier to keep on building.

One day, you took me by surprise. I glanced to my right and noticed that one of you was scratching at a brick. I couldn’t believe my eyes. It was slow work, but you kept on scraping at that brick. Before long I heard a bang and noticed that it was the sound of a brick falling on the ground. It didn’t bother me at first. It was just one brick.

I stopped paying very close attention until several months into our relationship. One day I took a quick glance at the perimeter of my wall and was shocked to see that an entire side was ruined. I was startled, but knew I could survive it. It was my good side, after all.

I had some serious thinking to do. I would either need to find some bricks and start building again, or I could live with just three sides to my wall. I thought back over the years it took me to build the wall. It was hard work. It had taken time and a toll on me. I decided to live with just three walls.

But that meant that I’d need to protect those bricks even more. So I stopped talking. I was petrified. What if you dared come up to my wall and start scraping at another side? What would I do then? I felt paralyzed.

I have to admit I could see you better without that one wall on my side, but I just wasn’t sure how much of me I wanted you to see.

Just recently I got this feeling that you had begun eroding another side of my wall. It was time to take action. The next time my turn was up, I’d make sure you understood you were to stay away from my wall. I glared. I kept my answers short. I even threw out a few zingers.

But it didn’t work. You see, I hadn’t been counting on one thing: you’d already made it inside my wall. I’m not sure how or when it happened. I’m not even sure I ever really invited you in–not formally at least. All I know is that one day you were hovering outside my wall, and the next I noticed you had slipped inside it.

The funny thing is that I didn’t mind as much as I thought I would. I kind of actually liked having company inside that wall. It hit me as I was driving home the other day. I’ve wasted so much time trying to lay bricks that are made of sand. I want you to give them a good kick and knock them down.

See, deep down, even though I seem detached, I don’t want you to leave. Deep down, I’ve found out I love you. So . . . I guess what I’m trying to say is thanks. Thanks for sticking it out with me and thanks for your unconditional love.

Can you relate to erecting walls between you and others? Do you know why? What can you do today to invite others in?

Relationships: Worth the Mess