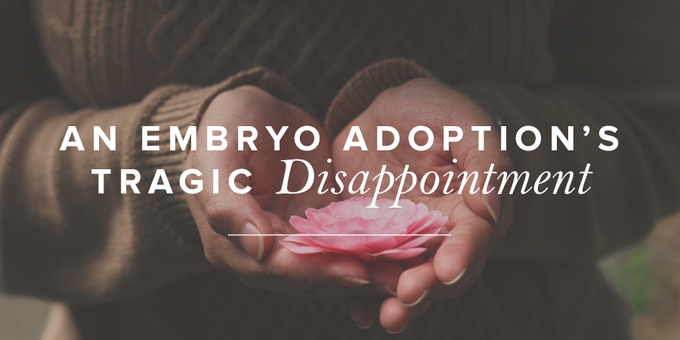 In November 2017, I miscarried twins. While I had previously experienced two miscarriages, this one was unique. The babies I lost in this miscarriage were adopted and not my biological children.

I had the gift of carrying these little ones through embryo adoption. My husband and I chose embryos that had already been fertilized and then frozen several days after fertilization. This is usually the result of the biological parents going through the process of in vitro fertilization and having more embryos fertilized than they wanted for their own family.

At this point, they can choose to have them destroyed or donate them to be adopted by other families. When Clay and I came to the clinic, we were given basic genetic info (race, height, weight, hair and eye color) as well as some social info (education, skills, hobbies) about the biological parents of each available embryo, and we chose the embryos we wanted to adopt.

From that point, the process was basically identical to in vitro fertilization. I went through weeks of bloodwork, hormone therapy, and tests to prepare my body to receive the embryos. The day they were implanted was one of the most exciting days I can remember. We had prayed through this process for almost two years, and now I was finally carrying them in my body. Unfortunately, it’s a risky process, and while my babies did survive the thawing process and the transplant, they did not survive much longer than that, and I miscarried shortly thereafter. The heartbreak was excruciating.

The thing is, though, the term miscarriage is only applicable here if we do in fact believe that those embryos were already human lives. One of the aspects of embryo adoption that I love the most is that it affirms the worth and value of life in its earliest stages. The headlines these days are full of debates over abortion and when life is really life and when it has value. The Scriptures teach us that life begins at conception (Jer. 1:5; Ps. 139:13–16). Since this is true, then the estimated 600,000–1,000,000 embryos frozen in storage facilities are lives that have already begun but have not yet been allowed to grow, develop, and be born.

We were asked by several people why we would focus on embryos instead of the orphans already born. “Why not just leave them there? They aren’t suffering, aren’t being abused, aren’t starving. Why not rescue the ones already born instead of bringing more children into the world?”

I can see where this question would come from, but to us, it was a matter of remembering that embryo adoption does not bring new lives into the world. They’re already here, already created, already bearing the image of God, and yet in limbo. It’s a totally strange phenomenon, one that’s difficult to wrap my brain around. Alive, yet frozen.

Are they suffering? I guess not, at least not in the sense of other orphans around the country and the world. But is it wrong to choose them to adopt instead of the orphans already born? Absolutely not. If not adopted, they will be destroyed. A life destroyed that could have lived. There are close to a million frozen embryos. Embryo adoption, while not a guarantee that they will be born and live, at least gives them a chance.

Miscarriage Is a Death Worth Grieving

Because I so strongly believed that these two babies were indeed already alive, already image-bearers, my grief at knowing they had not survived was real and devastating. The disappointment almost crushed me. I had spent two years preparing for these babies and fighting for them. I had defended their right to life time and time again. Every time I was forced to defend the validity of our choice, my heart both broke a little more and loved these babies exponentially more.

We had already embraced those babies into our hearts and lives, ordered our future around them being here. We knew our embryos. We chose them. We had pictures of their genetic parents, family history, details about their grandparents. They were already ours. We worked hard to prepare my womb for those babies, to make a safe and welcoming place for them. Every shot, every pill, every dose of medication that confused my body and threw me into an emotional roller coaster was an act of preparation and love for them, much like decorating the room for when a baby is expected.

Many people didn’t fully understand that an actual human being was living and then lost. We had several people say to us, “Sorry it didn’t work out.” But this wasn’t something that “didn’t work out.” It was two babies who were already human, alive and growing, and then they died. A miscarriage is an invisible kind of grief. Nothing looks different from the outside. No one can see a hole, a person who was once there and is now gone. It’s a private grief but a very real one. Two babies died, and death is always something to grieve. We grieve loss of life because God does. It’s actually wrong to not grieve death. Death came into the world through sin, and nothing will be right again until death is defeated once and for all by Christ. Until then, we grieve.

It’s been almost a year and a half since the profound disappointment of losing my babies. Honestly, I am still grieving. I still struggle and have moments when nothing makes sense. When we have loved and lost, we carry the scars with us, even if those whom we loved were people we never got to see or hold. So, how am I moving forward?

When my heart is broken, I must cling to the truth I believe when my heart is whole. When my thoughts are muddled and foggy and confused, I must cling to the truth I know when my head is clear. The truth of light doesn’t change just because it’s dark at the moment. The sun doesn’t cease to exist during the night. The God I trust when it’s easy is just as trustworthy when it’s hard.

Psalm 139:16 says, “Your eyes saw my unformed substance; in your book were written, every one of them, the days that were formed for me, when as yet there were none of them.”

This verse is true for my two babies who were basically still unformed, only a few cells yet still completely human in dignity, value, and substance. Their days were written in His book, and they are with Him now, fully alive and giving glory to Him. It’s true for the hundreds of thousands of frozen embryos still waiting for someone to adopt them and give them a chance to be born. It’s true for me as I still try to process the whole journey of embryo adoption, and it’s true for you in whatever disappointment you’re facing.

While we were still in the process leading up to our embryo transfer, a friend from my high school days contacted me. She had seen my blog entries about embryo adoption. She hadn’t been able to have children and had never heard of embryo adoption, but since reading about our journey, she and her husband started the process. Her transfer was a few months after I lost my babies, and her twins lived. They were born almost a year after my babies died. A sweet boy and girl were given a chance to be born, after being frozen in storage, because of the path God had led me to follow. My path ended in heartbreak, but it has already been used for good.

Our God loves to redeem disappointment. We don’t always get to see the redemption that quickly, but we can trust He is working good. One of the most comforting verses for a disappointed heart is Romans 8:28: “And we know that for those who love God all things work together for good, for those who are called according to his purpose.” This promise is true and trustworthy.

Would I have written my embryo adoption story to end the way it did? Absolutely not. I would much prefer to be snuggling my little ones right now. But I still believe it was totally worth it. Embryo adoption is risky, but so is all love. I pray that more families will follow the path of embryo adoption so that those tiniest of image-bearers will be given the opportunity to grow and thrive and be born to live for God’s glory.

PS: If you’d like to learn more about embryo adoption and how you can get involved, check out this practical article from our friends at the The Gospel Coalition.

Embracing the Grief of Miscarriage