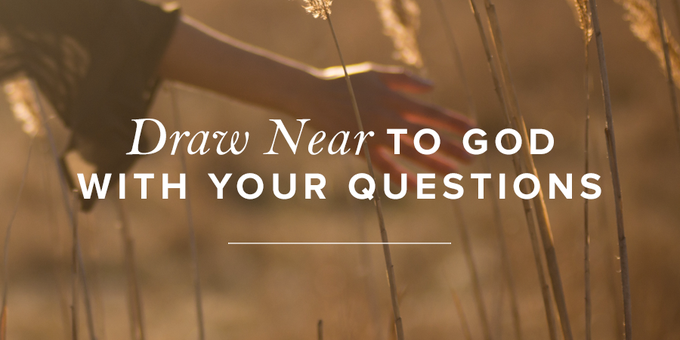 Draw Near to God with Your Questions

What do you do when the promises of God invoke pain, not comfort?

In 2009 I was desperate for God and daily devouring His Word. I sat on the floor of our church’s prayer room reading Psalm 84 when I came to verse 11:

For the LORD God is a sun and shield; the LORD bestows favor and honor. No good thing does he withhold from those who walk uprightly.

For the first time in my walk with God, His promises created pain, not comfort.

Just weeks earlier I had lost our third baby in miscarriage.

How could it be true that God is a shield? He was not shielding me from loss.

How could it be true that God doesn’t withhold good things? He was withholding children from me.

No, He had not been a sun and a shield for me. He had cast a dark cloud over me and exposed me to unimaginable pain.

My experience sharply clashed with the Scripture. Jesus said ask and you shall receive. I asked that these children would survive and instead watched them die.

God said He is near to the brokenhearted. I came to Him day after day in prayer and in the Word, and He had never felt more distant.

My experience and God’s promises created tension in my life. A dissonance. A sharp pain that up until this point was unfamiliar in my walk with God.

Have you been there?

Draw Near with Questions

We all experience times of dissonance, when the promises of God seem to mock us and not comfort us. The temptation in these seasons is to modify or dismiss the Truth of God’s Word. We modify it by adding qualifiers: God’s promise for everyone except me or for those who haven’t sinned in the ways I have. And we dismiss it by silently accepting that it isn’t true: Clearly this isn’t a promise I can count on; it must not be 100% true.

It’s tempting to slowly withdraw from God and assume He isn’t trustworthy. Or to shove our emotions out of sight and put on a fake faith, outwardly agreeing with every statement of truth but inwardly despising it.

But there is a better way. A way to draw near to God without faking it. A way to acknowledge both the truth of the Word and the reality of our circumstances.

How do we do this? By questioning God.

We see this modeled most clearly by a man who faced his fair share of trials: King David.

After being anointed as the future king of Israel, he faithfully served his king and his country. He supported and personally attended Saul, the current king, bravely fought Goliath, and spent years of his life faithfully fighting for Israel.

But after doing the right things, he was attacked and hunted down by the very king he so faithfully served. Forced to flee his beloved country, David spent years in hiding, running for his life from the one he served.

David likely wondered about God’s trustworthiness and goodness toward him. But he was a man after God’s own heart. He longed for nearness with God. And so he responded to the dissonance in his own life by drawing near to God with questions.

Over and over again in the psalms we see David rattle off his questions:

Why do you stand afar off, O Lord? Why do you hide yourself in times of trouble? How long, O Lord? Will you forget me forever? How long will you hide your face from me? My God, why have you forsaken me? O my God, I cry to you by day but you do not answer; and by night, but I have no rest.

What We Learn from Children

When I tell my kids their dad will be home to put them to bed and then his flight is delayed, they don’t understand. All they know is Mom said he’d be here, and now he’s not here. They know me to be trustworthy, and they know their dad wants to be home with them. So how do they reconcile the things they know about their parents with the reality of the situation? They ask questions. Boldly and without fear of retribution.

“But Mom, you said he’d be home before bedtime. Can’t you do something? What is a flight delay? I don’t understand why we can’t call Dad. Didn’t he want to come home and see us?”

As a parent, I don’t despise their questions. I am glad for them! I would be far more concerned if upon hearing the disappointing news they sulked off to their room saying, “Okay Mom, whatever you say.”

I’m their mom. I know they’re disappointed. I know they don’t understand. And hearing them say the “right” thing doesn’t give me joy because underneath, I know they are sad. Not only that, I know that not addressing their sorrow could give way to bitterness and cause tension in our relationship. I want nearness with them, and their questions signal that they want it to.

For all who are in Christ, God is now our Father. The stain of sin that could bring about His displeasure has forever been removed by Jesus’ atoning death. We now have the right to approach God with confidence, with boldness, and with freedom, as a child approaches his father. We can bring our questions without fear of retribution. We can be honest with God about how His promises are affecting us.

So when suffering comes, when God feels distant, when all His promises invoke pain not joy, draw near.

Draw near to God with your questions. Come to Him with your raw emotions, your aching heart, your faithless soul. Bring your questions and then await His response. Linger in His presence in prayer. Keep yourself in the Word of God, reading and studying it.

Be determined to seek the face of God, in honesty and sincerity. And wait on Him with fierce perseverance. For no one who waits on God will ever be put to shame (Ps. 25:3). He will draw near to all those who draw near to Him (James 4:8).

When the Pain Doesn’t Seem Fair