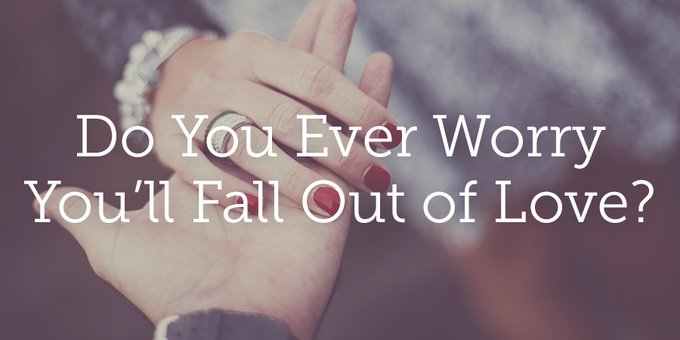 Do You Ever Worry You'll Fall Out of Love?

An unmarried friend asked me this question recently, and for one small moment I felt like Mickey Mantle teaching a newbie how to swing. Eight years ago a question like this would've been a fast pitch straight to my head. But not anymore. As a dreamy romantic who's learned a lot of lessons the hard way, this was one question I knew I could knock out of the park.

It doesn't matter whom you marry, at some point the butterflies will fly away.

Do I ever worry I'll fall out of love? No. Because I already have. If we define love in the ooey-gooey sense as this question always characterizes it, then I've already fallen in and out and back in and back out of love (with the same man!) thousands of times. That night I assured my friend that she could stop worrying about falling out of love not because it's a rarity, but because it's a certainty. It doesn't matter whom you marry, at some point the butterflies will fly away and forget to put the toilet seat down when they go. But this is not a bad thing! When those butterflies desert you, they will take with them the fairytale and leave the reality of love in its place.

I know this sounds cringeworthy; believe me, the Anne of Green Gables within me also wants to cringe. The fairytale of love is everything beautiful about love, right? It's delight instead of duty, passion instead of obligation. But here's the catch: Fairytale love is true love . . . just not for him. The reason fairytale love feels so great is because at its core it's love for me.

At this point in the conversation, I launched into Paul David Tripp's explanation (from his book What Did You Expect?) of the two kingdoms in life. (My friend rolled her eyes, too, but pay attention! This is the heart of it all.)

There are two kingdoms in life—the Kingdom of God and the Kingdom of Self. "Falling in love" naturally caters to the Kingdom of Self. It makes you feel beautiful, special, and skinnier than you actually are. Then you fast forward a decade and realize the Kingdom of Self has taken a major hit. Your handsome groom no longer exists solely to woo you and make you feel good about yourself. Worse yet, he's prone to take an interest in his Kingdom of Self . . . which co-exists with your Kingdom of Self about as well as a kingdom can function with two kings and zero servants. At this point, you have a choice. You can continue living for the Kingdom of Self, which will involve slowly shutting him out, filling your life with personal hobbies and distractions, and perhaps finding someone new to "fall in love" with.

The Kingdom of God honors others when no one's watching, thinks of others when it doesn't want to, and gives when nobody returns the favor.

Or you can choose to live for the Kingdom of God. The tough part is the Kingdom of God is radically opposed to (gulp) self. In the words of 2 Corinthians 5:15, "And he (Jesus) died for all, that those who live might no longer live for themselves but for him who for their sake died and was raised" (emphasis added).

In other words, the Kingdom of God stays up late to listen when it's aching to go to bed. It wakes up with the needs and desires of the other fresh on its heart. It forgives painful sins, gets involved in messy problems, and does laundry that's been sitting in the car long enough to make you gag. The Kingdom of God honors others when no one's watching, thinks of others when it doesn't want to, and gives when nobody returns the favor. And when the Kingdom of Self is clawing at your chest, the Kingdom of God tells it to hush and keeps on serving.

Do you feel hopeless yet? That's a good thing, because the bottom line is you and I can't ever love this way on our own. That's why we need a Savior. That's why marriage is such a picture of the gospel (Eph. 5:31–32). Without the grace of Jesus, two sinners could never love the way Christ loves. And here's the really amazing part: This kind of self-denying, other-focused love that is agonizing to practice and only possible by God's grace and strength generates the truest and purest affection you could ever imagine.

Picture a day at the fair, riding on the Ferris wheel with that charming boy who's totally consumed with you. Ah, butterflies galore! Now picture that same boy ten years later, crying when he feels like a failure. Vomiting when he's got a bug. Angry when he had a bad day. Picture looking at him and being able to see inside his heart—to see his insecurities, his weakness, his longings, and his hopes. Picture yourself comforting him when he cries, cleaning up his vomit, forgiving his misplaced anger. None of these actions are devoid of emotion. Neither are they governed by emotion. Rather, they inspire emotionâ€”empathy, devotion, gratitude, contentment, joy, and yes, even passion, long after the last butterfly has left.

I'm the One Holding the Strings