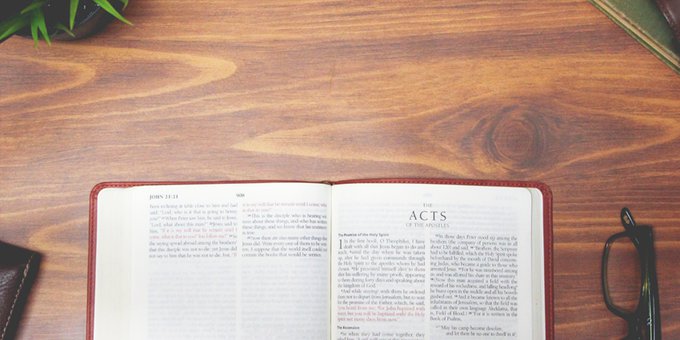 A once-healthy couple, dead within three hours of one another. No foul play. No health problems. No trauma of any kind. They simply fell down and stopped breathing, their lives cut short as judgment from God. Though it sounds more like the beginning of an episode of Law and Order, this type of death is rare but not unheard of throughout Scripture.

And the story we want to grapple with today: Ananias and Sapphira who lied to God (Acts 5:1–11).

In earliest days of the Church, after the ascension of Jesus and the giving of the Holy Spirit (Acts 1–2), the new disciples of “the Way” had what to us seems a curious practice. They lived communally and took care of one another, often through the sale of their individual property. Though not required, this was common. Ananias and Sapphira decided to demonstrate this type of generosity and sold a piece of land. However, they agreed that they’d tell the church that they were donating all of the money; meanwhile, they’d actually keep back a portion for themselves.

Ananias came by himself to make the presentation to Peter, who, apparently through prompting of the Holy Spirit, called Ananias on his lie. Before he could make any type of response or excuse, Ananias fell down dead. The same fate would befall his wife just a few hours later.

This account teaches many lessons, the easiest of which to see is probably “Don’t lie to God.” However, the lie Ananias and Sapphira told began long before they entered the congregation that day. It began the same place we all go astray: with a divided heart.

This narrative teaches us that a divided heart (aka double-mindedness) leads to disaster.

The first indication of double-mindedness comes through the words of Ananias and Sapphira. In order to keep up the charade of their generosity, they needed to lie to Peter about the selling price of their property. To do that, they conspired together to get their story straight. This immediately sends up a warning flare.

Many of our pet sins lead us to more sin, particularly in the area of our speech. It may be something “big” like pornography, infidelity, or underhanded business dealings; but it could also be something much smaller and more “respectable.” We may “stretch the truth” about how we spent our time on a given day, not owning up to the hour that got away from us on social media. When explaining the plot of a novel we’re enjoying, we may conveniently neglect to mention the steamy elements. Maybe the dishonesty doesn’t come out of our mouths, but we allow our thoughts to mislead us. “One more brownie; one more episode; one more purchase. It’s no big deal. No one will know.”

Our society has called itself “post-truth.” Facts are relative; truth is flexible. When we buy into this philosophy, our hearts are ripe for all kinds of evil.

Beware, my friends. When our hearts lead us to deceive ourselves or others, their allegiance has been compromised.

Next, we see that the hearts of Ananias and Sapphira swore a double allegiance in regard to finances. However, I must be clear on this point: They were not struck down because they didn’t give everything they profited to the church. They were well within their rights to keep back part of the proceeds of the sale of their property. As Peter tells Ananias, “While it remained unsold, did it not remain your own? And after it was sold, was it not under your control?” (Acts 5:4 NASB).

Their hearts were divided because they wanted to worship God with some of their money and keep some of it for their own pleasure.

But God calls us to love Him with all of our money and possessions.

Jesus spoke often about financial matters. In His most famous discourse, known as the Sermon on the Mount (Matt. 5–7), He speaks at length about trusting God with our resources (6:24–34). To kick off that discussion, He states,

"No one can serve two masters, since either he will hate one and love the other, or he will be devoted to one and despise the other. You cannot serve both God and money.” (Matt. 6:24)

A heart divided by money, Jesus says, will not stay divided for long. Eventually one of the masters—God or money—will win out. No wonder Paul warns his young protégé Timothy,

For the love of money is a root of all kinds of evil, and by craving it, some have wandered away from the faith and pierced themselves with many griefs. (1 Tim. 6:10)

This does not mean that every dime we earn must be given to the church or to missions or to a parachurch ministry. What it does mean is that a pure, undivided heart will recognize every single dime as a gift from God and desire to steward it to the glory of God’s kingdom, rather than its own. We demonstrate it each week as we give a percentage of income to the church and insist on transparent honesty in our financial dealings with other people, our employers, and the government. For some, kingdom-oriented stewardship may mean driving an older car or living in a smaller house in order to support a struggling ministry. It may mean a higher grocery bill in order to practice gospel-motivated hospitality. It may mean forfeiting a family vacation in order to sponsor a teenager headed overseas on a short-term mission trip. For all of us, it requires keeping eternity in view.

Just as Ananias and his wife did, I often want to serve God with my money and serve my idols too. How about you?

Finally, we see that Ananias and Sapphira allowed their hearts to be divided in their worship of God. They brought the money from the sale of their land as an offering to the welfare of all in the church. The fact that they didn’t give all of the money wasn’t the problem. The problem was that they thought they could pretend to be all-in while in fact harboring some of their assets for their own pleasure.

However, as followers of Christ, we’re commanded to be all-in or not in at all.

Then he said to them all, "If anyone wants to follow after me, let him deny himself, take up his cross daily, and follow me. For whoever wants to save his life will lose it, but whoever loses his life because of me will save it. For what does it benefit someone if he gains the whole world, and yet loses or forfeits himself? (Luke 9:23–25)

Therefore, brothers and sisters, in view of the mercies of God, I urge you to present your bodies as a living sacrifice, holy and pleasing to God; this is your true worship. (Rom. 12:1)

The point is that all we do, all we say, all we own is a matter of worship. We don’t worship God just for an hour on Sunday mornings. Our very bodies are temples, always aimed at worshiping something.

A heart divided in its worship is devoted to its idols and playing a game with God.

Ananias and Sapphira clearly had a compromised allegiance to the one they called Lord, and they incurred a severe penalty for their duplicity. Thankfully, in His mercy, God does not usually deal that way with us when our hearts are divided—though He certainly could. Our only hope for a united heart comes from our union with Christ. His perfect, undivided heart is now ours. That spiritual reality will be fully realized one day; but it’s just as true today while we still grapple with wishy-washy, idol-serving, divided-loyalty hearts. We must rehearse the truths of the gospel daily.

There’s no easy, one-and-done solution to the battle of double-mindedness. Indeed, this is the issue that derails our idolatrous hearts. However, the epistle of James, the entire theme of which is having an undivided heart, gives us a few key steps to single-minded devotion to our Savior:

May the cry of David be our cry as well:
“Give me an undivided mind to fear your name.”(Psalm 86:11)